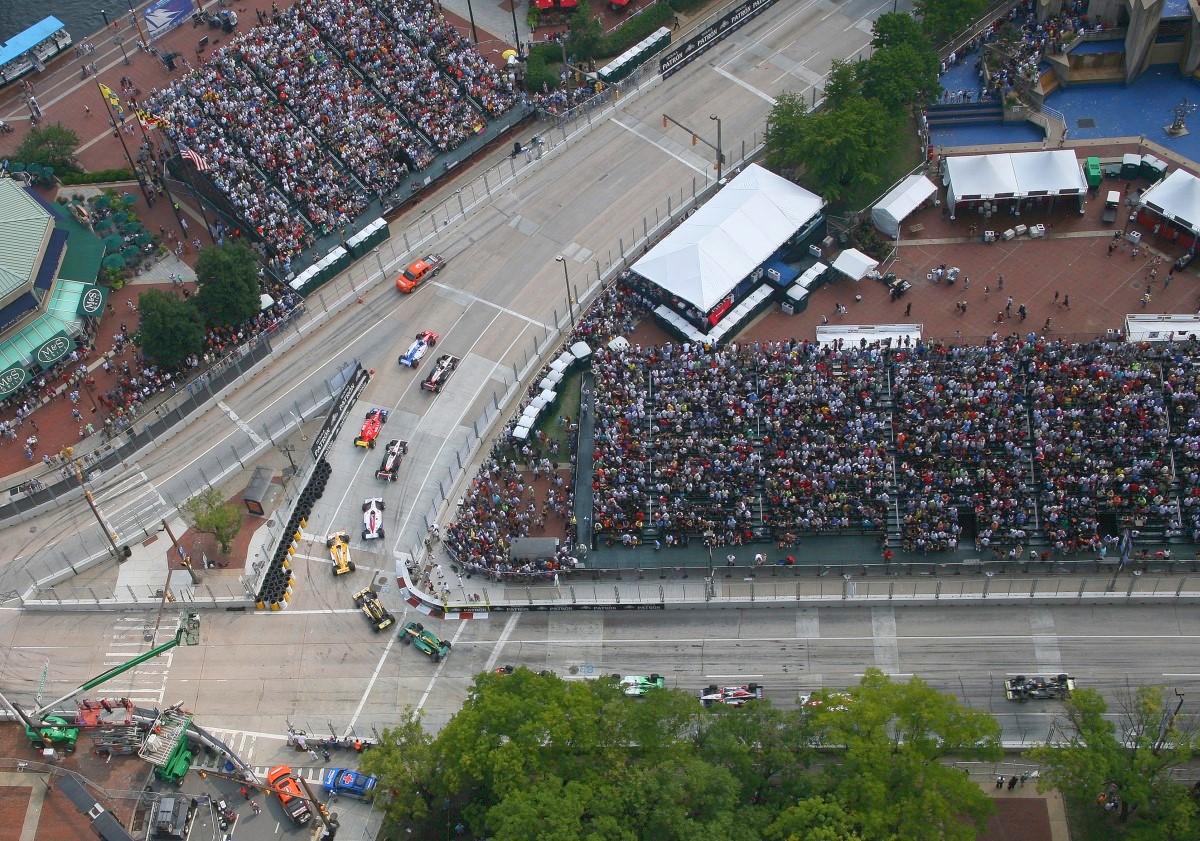 A large patch of downtown became a fan village encircled by a 2.1-mile street circuit racetrack. Miles of temporary barriers and chain-link fences kept spectators a safe distance from the track and separated the fan village, which included Camden Yards, from the rest of the city, including the Inner Harbor.

The three-day slate of races culminated with a 75-lap entry in the IndyCar open-wheel racing series. Will Power of Team Penske won the main event, pulling 5 points behind the series leader, Dario Franchitti of Target Chip Ganassi, who finished fourth.

Other events included qualifying and practice on Friday, and Saturday’s American LeMans 100, in which several vehicle classifications with two-person crews raced simultaneously.

Baltimore spent an estimated $6.5 million constructing the temporary downtown circuit, grinding and repaving several streets to make them suitable for racing. Baltimore will host IndyCar events for at least the next five years.

The Versus television network estimated Sunday’s attendance at 75,000, though official attendance figures were unavailable. “Race officials were blown away by the numbers," Mayor Stephanie Rawlings-Blake of Baltimore said. “The numbers they saw on Friday were what they expected to see on a Sunday."

Grandstands and sidewalks in the fan village overflowed during the major races, and competitors marveled at the crowd sizes.

“The fan support was absolutely staggering," said Rob Dyson, the owner of the first- and second-place P.C.-class cars in the Le Mans race.

Given the ceaseless din of the engines, the circling helicopters and the bunker-like expanses of concrete barriers, the fan village was noisy, disorienting and claustrophobic at times. Lightning warnings on Saturday morning forced the temporary closing of grandstands and caused television monitors to display “Severe Weather Alert: Take Shelter" warnings.

But for most of the weekend, the weather was clear and crowds were diverse: hard-core race fans, curiosity seekers, college-age revelers and families with infants.

Baltimore still has some issues to resolve on and off the track. Road repairs continued into Thursday night, just hours before the first round of warm-ups and qualifiers. Racers struggled with the course’s idiosyncrasies.

“Pratt Street is really rough," said Graham Rahal, who finished 10th in the IndyCar race. “It’s as bumpy as can be."

Racers had the most difficulty with Turn 1, a 120-degree curve at the end of the Pratt Street straightaway. Several IndyCar racers bounced off walls during Friday warm-ups, and early crashes affected the outcomes of Saturday’s race.

The IndyCar main event went rather smoothly, however, with just three yellow flags, one caused when Ryan Briscoe struck the rear of Ryan Hunter-Reay’s car, causing a spinout on the hairpin Turn 3.

But there were logistical issues at the entrance gates. As the main event approached on Sunday afternoon, lines to enter the fan village stretched for more than a block at some gates. Most spectators were well behaved, though there were a handful of fights on crowded pedestrian walkways.

Many major downtown arteries closed starting on Wednesday in preparation for the races, causing severe traffic congestion during the work week. By the weekend, however, delays were minor, and traffic on the interstates and downtown ran relatively smoothly.

“There are some things we are going to learn from in terms of fan entrance and egress," said Ian Brennan, the press secretary for the mayor. “But we are starting from a really good point."

Baltimore joins Toronto and Long Beach, Calif., as the only cities in North America to host IndyCar racing on city streets. Roger Penske, the owner of Team Penske, says success in Baltimore can increase his sport’s visibility and viability at a time when Nascar has become far more popular.

“We want to build this as a great North American sport," he said.

Rawlings-Blake says she wants to keep the IndyCar relationship with Baltimore going indefinitely. “This was magnificent for our city," she said.

Simona de Silvestro, who finished sixth in the IndyCar race, put the event’s potential in global perspective. “This could be our Monaco," she said. NY Times