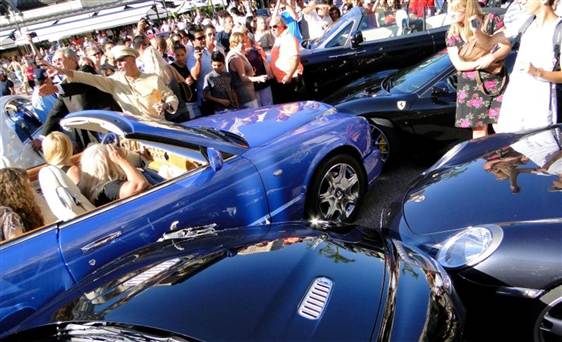 Car aficionados, you might want to avert your eyes.

The wealthy French Riviera city state of Monaco was the scene of a pileup involving five luxury cars with an estimated value of more than $1.1 million.

The British TV network reported that the incident began when the Bentley scraped the side of the Mercedes before plowing into the Ferrari. Then, the Bentley proceeded to run into the Aston Martin and the Porsche.

Hundreds of tourists quickly descended on the scene, snapping photos of the drivers' misfortune.

The Daily Mail newspaper quoted Ruud Poot, editor of European motoring website Autogespot, as saying: "You probably couldn’t find a worse place in the world to crash your car than outside Monaco’s Place du Casino in the middle of the summer."

The repair bill for the vehicles was estimated at around $160,000, reports said.

With luck like this, let's hope the driver of the Bentley avoided the nearby casino. msn.com