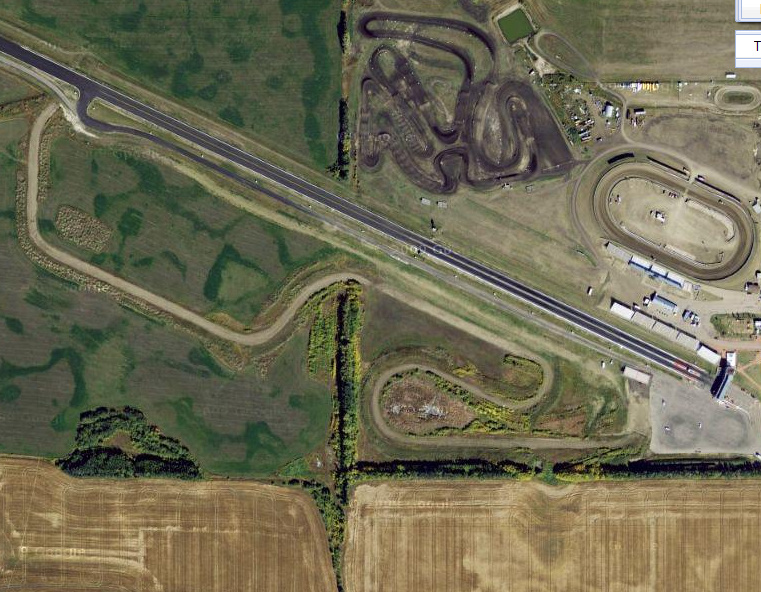 UPDATE #3
Q. I know Indy doesn't reveal attendance numbers – but what was your approx. number in the stands on Sunday?

A. By my count there were about 23,000 seats plus the suites, motor home spots and general admission crowd which stood three and four deep in places. So I'm guessing close to 50,000 [much higher than Curt Cavin's estimate from the Indy Star]. All but the general admissions were sold on a three-day buy, so it would put it around 100,000 with the rain Friday and the iffy day Saturday. But that's such a guess, I didn't feel comfortable throwing that number in my coverage. So let's label it that way. Terry Jones, Edmonton Sun

Indy Star's Curt Cavin stated (as we published below) that Edmonton has the second lowest number of seats (in the IndyCar series) to Mid-Ohio. Not true. Toronto had even fewer seats than Edmonton.

What follows is an estimate of seats, the methodology, and gross income (Sunday Only) at Toronto. Friday was a free day but Saturday did generate some revenue, which is not included in the analysis below. Nor is revenue from concessions and suites.

What is clear in Toronto, if Honda was not present, the race would not happen. Having only a potential gross of about $2 million (when that's a tad less than the sanction fee) means that there is not sufficient demand by the public to hold the race, or the race is not being promoted correctly as it regularly drew over 60,000 in the CART days.

As many of you are aware, the Honda Indy Toronto website provided detailed seating plans as well as the number of unsold seats.

If all of the seats available online were sold at the non-discounted adult “Sunday-only" price, the gross revenue from those seats would have been $1,551,885.

The majority of the unsold seats were in the five lower rows of a grandstand.

By no means, should the information contained herein be considered definitive. For example, some of grandstands started their numbering at Row No. 3. Thus, there could be large groups of tickets that were not publicly available online. Further, there was no online information concerning the number of suites seats or GA sales. Lastly, all grandstand seats were also available for sale both as “Saturday-only" as well as “Saturday-Sunday".

*Does not include revenue from Saturday or revenue from suites and concessions. Real number is at last $2 million.

07/25/11 The Champ Car Series first raced in Edmonton in 2005 with huge success. The three-day crowd in the first year broke attendance records for the series, as 200,052 people filled the stands over 3-days. While the number of bums in the seats decreased in subsequent years, the event continued to be one of the best draws on the old Champ Car circuit. Getting fans in the stands wasn’t much of an issue in the first few years, with the worst weekend attendance in the three years Champ Car raced in the city adding up to 160,000.

IndyCar added the race to its calendar when it swallowed rival Champ Car just prior to the 2008 season and it’s been running with the new series since. IndyCar does not release attendance figures.

However, as stated below, there were less than 16,000 seats this year in Edmonton, equating to perhaps a 3-day crowd of 30,000. Another tragedy in the legacy of Tony George, who did more damage (by creating the IRL) to the sport of IndyCar racing in 10 years than World War I, World War II and the great depression combined.

07/25/11 IndyCar and Octane Motorsports Events have two years left on the contract to race at City Centre Airport. After that, the site won't be available; it will be developed as a residential property. That means the city is going to have to find another venue and it's assumed it will be as we previously rumored.

It would take perhaps $5 million for Castrol Raceway to whip its venue into shape for an IndyCar road race. Castrol owner Rob Reeves met last month with Mayor Stephen Mandel and Northlands officials to discuss the merits of such a construction project. But Reeves, who came up with the $5-million figure based on the needed infrastructure on the site near Edmonton International Airport, doesn't want to finance it all on his own. In fact, he won't spend a minute or a dime on the proposal Mandel asked him to produce until he knows what kind of political and financial backing the race is likely to receive in the future.

07/24/11 A reader writes, Dear AR1.com, I was astonished to see that the average Indy Car qualifying speed for the Edmonton airport circuit is just 101 mph and just 3 mph faster than the Indy Lights cars. That is slower than a street circuit. What was once a great track is now Mickey Mouse. Watching the cars go so slow is like watching paint dry. Granted, I recognize that the current IndyCar is a slug, but 101 mph?

To make matters worse, I just read that there are less than 16,000 grandstand seats in Edmonton. The largest two sections are in turn one, each possessing 4,200 seats. Down toward turn five are a pair of grandstands with 1,200 seats in each.

There are 1,344 folding chairs set up for viewing in the front straightaway suite section, and there's a 2,400-seat grandstand at the pit entrance. The only other section is in turn 13, and it has 1,440 seats. The total: 15,984 seats. Pathetic. They used to get 70,000 on race day in the Champ Car days. Kiss this race goodbye. Dwight Hughes