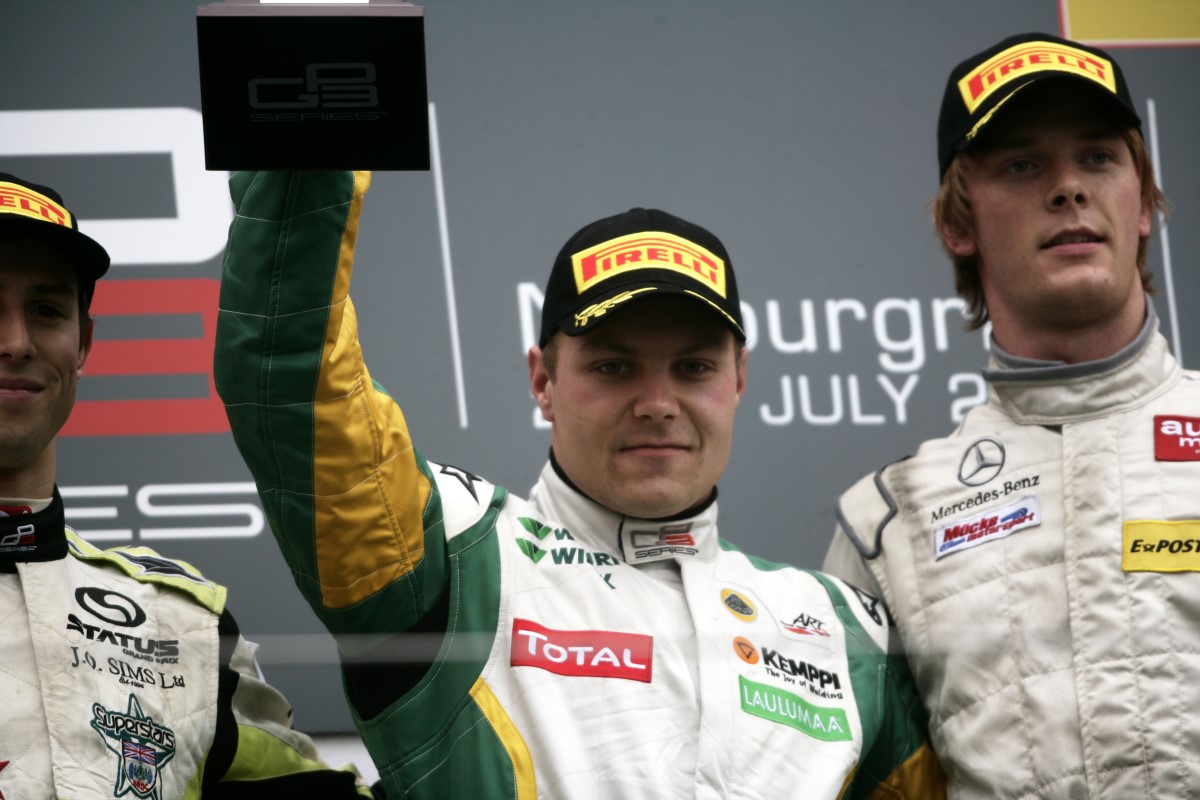 Valtteri Bottas took his maiden GP3 Series win at NÃ¼rburgring today after a strong start from sixth put him into the lead by the end of Lap 1. The Lotus ART man finished 1.473 seconds ahead of Status Grand Prix’s Alexander Sims and RSC MÃ¼cke Motorsport’s Nigel Melker who claimed a home race podium for his German team.

When the lights went out for the start of a wet Race 2, Tech 1 Racing’s Tamas Pal Kiss and Aaro Vainio held onto the top two spots, with the Lotus ART duo of Bottas and James Calado making headway into third and fourth – despite pulling away well from third Conor Daly ran wide at Turn 1, and Adrian Quaife-Hobbs was beaten off the line.

As the drivers continued to grapple for position Vainio and Calado came to blows, with the ART man dropping down to the back of the field – Vainio was later handed a drive through penalty for the incident. With Vainio no longer a threat, Bottas made his move on Pal Kiss to take the lead of the race, and Sims capitalized on the chaos to move up into second behind the Finn. Pal Kiss soon lost a further spot to Melker who had worked his way from tenth on the grid.

Sims then set his sights on the leader who was pulling away at the front, and posted consecutive fastest laps to reel in the Finn. With the three podium men chasing each other down at the front, the battle was on for the final three points paying positions. Calado was working on damage limitation, and put in a dogged drive to take the all important final point.

With the checkered flag in sight, Sims had reduced the gap to Bottas to just over a second, but found himself defending from a charging Melker on the last lap. And so Bottas took his first GP3 win to become the tenth victor of the season. Sims held on to second and Melker settled for third after running wide on the last lap. Pal Kiss and Dillmann crossed the line in fourth and fifth respectively, with Calado close behind in sixth.

Sims is now leading the Series by six points ahead of the MW Arden duo of Lewis Williamson and Mitch Evans. MW Arden is leading the teams’ standings by five points ahead Lotus ART who have moved up into second.