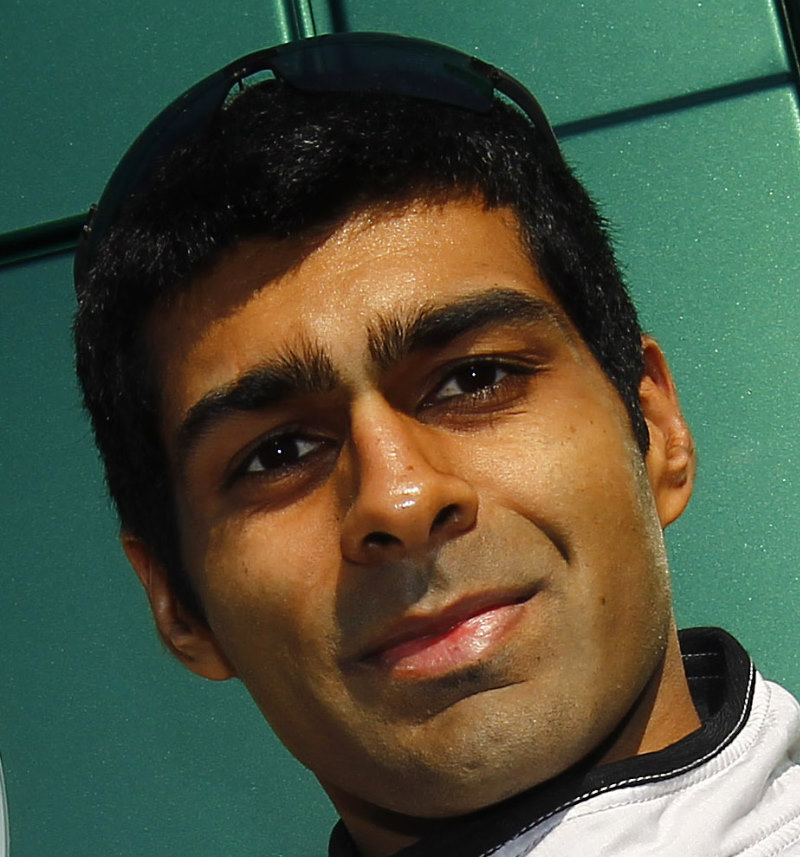 Team boss Tony Fernandes said he wanted to give Indian reserve driver Chandhok, 27, his first opportunity to contest a grand prix since he was ousted by HRT a year ago.

The Malaysian businessman said Trulli, who has struggled to perform at the wheel of the T128 due to its existing power steering system, was "extremely accommodating" in stepping aside.

"I am delighted to confirm that we are in the process of negotiating an extension to his (Trulli's) contract with us and we are all looking forward to unveiling the details of that very soon," added Fernandes.

It is expected that Trulli, who will be at the Nurburgring this weekend, will return to the car in Hungary, where a new steering system will debut.

Tony Fernandes – Team Principal: “I am looking forward to my first visit to the German Grand Prix, even more so now we have announced that Karun will be competing in his first full race weekend for Team Lotus. Ever since I first met Karun I have been impressed with his whole demeanor – he is talented, passionate, committed and he brings great energy to the whole team so I am delighted that we are giving him the chance to add even more value to us in the cockpit over a whole race weekend. One of the key goals of Team Lotus is to provide a stepladder to the top of world motorsport for talent from all over the world and we have been true to that philosophy since the first days of the team. For Formula 1 to continue to develop globally we need to keep creating new opportunities for talent from around the world to reach the top and Team Lotus will continue to do its best to support that. As a young Asian driver Karun faces even more obstacles to achieving his goals than his counterparts from the established motorsport homelands in the West, both from inside and outside F1, and I am very proud to be able to give him this chance on merit.

“I also want to take this chance to thank Jarno for helping make Karun’s opportunity this weekend possible. He has been extremely accommodating in stepping to the side for this race and our commitment to him is unwavering. I am delighted to confirm that we are in the process of negotiating an extension to his contract with us and we are all looking forward to unveiling the details of that very soon. He is a key member of our team and I hope that we can give him a car as soon as possible that allows him to utilize his considerable talent to the full. For this weekend he will be on hand to lend his huge experience and support to Karun and I am sure Jarno, Heikki and Karun will do me, the whole team and all our fans very proud indeed."

Karun Chandhok – car 21, chassis T128-04: “Firstly I want to thank Tony Fernandes, Kamarudin Meranun and SM Nasarudin for giving me the chance to race this weekend for Team Lotus. Ever since I first joined the team I have been looking forward to this opportunity and I am determined to do my best to repay their faith in me and help the team progress, this season and for many years to come. I am approaching the weekend in a very realistic frame of mind. I will be doing my best to push and to make sure I learn as much as possible all weekend, take each session as it comes and work as closely as I can with the engineers and the whole team to do the best job I can. Whatever happens, I am very excited about lining up on the grid on Sunday and I know there will be millions of Indian fans, and Team Lotus fans around the world, who will be behind me and the whole team, so I will do the best I can to give them something to cheer for."

Jarno Trulli: “I’m looking forward to working with Karun this weekend and doing whatever I can to help him get the most out of his opportunity in Germany. It’s great that the team is true to its word of helping develop young talent, particularly from parts of the word where it is even harder to break through into the top rung of motorsport, so I’ll be there to give him guidance and assistance, in and out of the car."

Mike Gascoyne, Chief Technical Officer: “I am delighted that we are able to give Karun a full weekend in the car. He has been a very good addition to our driver line-up and now we are giving him a chance to take the next step in fulfilling his potential. Jarno will be stepping aside for him for this race and we will use Karun’s feedback over the weekend as a comparison against Jarno’s and Heikki’s experiences this season with a number of aspects of the car, including the power steering system, to help us keep moving forward in 2011 and beyond. I am sure Karun will equip himself very well in this and in his performances in and out of the car all weekend. The whole team is looking forward to helping him get the most out of his time in the cockpit in Germany and it will be good to see him grab this chance and make the most of it."

“Looking at the track, the Nurburgring is one of the typical modern F1 circuits, among the first of the modern era to introduce big run-off areas and, much like Spa, a track that is subject to huge variations in the weather conditions. It can be blisteringly hot, especially in July, but you can also have local showers building up with almost no notice so the weather always plays a big part over the whole weekend. When the track was constructed they attempted to make it a small version of the legendary Nordschleife, and while it has elevation changes and a couple of quick corners it obviously can’t replicate the fearsome challenge of the old track next door.

“Having said that I think it will be a good race. Overtaking has not been too easy there over the years but we have already seen this season that DRS and the behavior of the tires has meant overtaking is now possible at a number of tracks where traditionally passing was only really possible in the pits. Pirelli are bringing a medium and a soft tire as the choices in Germany, so the performance differential between the two compounds won’t be as pronounced as it was at Silverstone, but I think we will still have an interesting race right across the grid as degradation levels will need to be managed as the grip levels improve throughout the weekend."

Heikki Kovalainen – car 20, chassis T128-01: “Before the race weekend starts we’re doing some filming with Renault Sport F1 around the original Nordschleife. I’ve driven there a couple of times and it really is one of the best driving experiences in the world. It obviously has a huge amount of history and is rightly considered one of the greatest single laps in motor racing. Driving a modern F1 car around there would obviously be incredible but I don’t think it’s particularly likely… it doesn’t have the run-off areas that we need from a safety perspective and the track surface is pretty bumpy, so even though we’re not in something as quick as my current car I’m really looking forward to the afternoon we have working there.

“From the old to the new. This is our first visit to the Nurburgring as Team Lotus as we were are Hockenheim last year, so I’m looking forward to taking the green and yellow to the new Nurburgring which, while it’s not the same as where we will have been filming, it still has a good mix of elevation changes and high and low speed sections. Finding the right downforce level takes a bit of work as you don’t want to compromise your speed on the straights, particularly from T11 to T13, but you also need to have as much grip as possible through the tight sections, especially into T1 and the chicane at T13 at the end of the lap where there you have the best chances of overtaking other cars. The weather is also usually a pretty big factor at the Nurburgring. It’s almost exactly like Spa in the way it can be hot and sunny one minute and then heavy rain the next, and I personally love racing in those sorts of changeable conditions. Going from a dry track to a wet one on the same lap is the what racing drivers should have to deal with as much as possible, so, while it’s not great for the spectators sitting in the stands, I hope we have exactly that sort of mixed up weather!"

Track Guide: Turn 1 is one of the critical points of the whole lap, particularly at the start. It goes slightly downhill into a very tight right-hander and as the cars come in there side-by-side it is easy for the drivers to miss their braking points and compromise their opening laps. However, it looks like the pressure on the drivers to gain positions at the start may have diminished slightly this season so T1 in Germany may not be quite as exciting as it has been in years gone by. The drivers seem to be approaching the first corner of the races much more carefully than in previous seasons, perhaps because they know they can overtake in the race itself using DRS, so the pressure to make up places at the start is reduced, thereby minimizing driver errors on the opening lap.

After the opening sequence of corners the pack heads onto T6 where the track is again downhill. Overtaking is not likely there, it may be from T2 – T4 as the track is very wide and there are a number of lines the drivers can take through that section, particularly in the wet, but until they reach T8 / T9 there is nothing hugely challenging for the drivers. T8 / T9 is the best part of the track from the drivers’ perspective – it is flat out uphill and the only real high-speed corner on the track where they need to take the right line to make sure they do not lose any time on the lap. T10, T11 and T12 are all relatively easy and then it is the flat out blast down to the best overtaking spot on the circuit at T13.