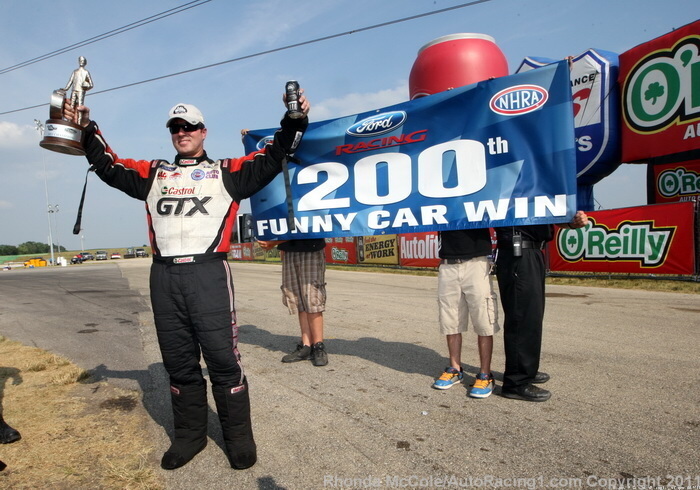 With the NHRA Full Throttle Series off this weekend, we’re taking a look back at the moment Ford earned its 200th Funny Car win – the 173rd event win for the Mustang in Funny Car. Superb tuner/driver Mike Neff, driver of the Castrol GTX Mustang for John Force Racing, brought home the historical Wally trophy for Ford. Neff is shaping up to be one of the most prolific driver/crew chief combinations in NHRA history, as evidenced by his lead in the Series point standings and win at Route 66 Raceway near Chicago. This win was perfectly timed for the ‘One Ford’ Funny Car team – Ford Racing celebrates its 110th anniversary this year.

WHAT IS IT LIKE TO BE THE DRIVER TO WIN FORD’S 200th? Mike Neff, driver of the Castrol GTX Ford Mustang. “It’s a huge honor. Ford’s a great supporter of ours. They’ve helped us with a lot of this technology and it’s the finest American company, in my opinion. I’m proud to represent them. To be able to get that 200th win, that’s something that goes down in the record books. That’s something that will always be remembered. It’s just a huge honor here at John Force Racing to be able to get that for them. I can’t thank them enough for all that they do."

OUT OF THOSE 200, 173 WERE WON IN A FORD. TALK ABOUT THE ROLE THE MUSTANG HAS PLAYED IN YOUR CAREER. “The Mustang body, I believe, is the best and gives us an advantage aerodynamics-wise when the conditions are hot and slippery. We have the luxury of not having to run so much rear spoiler which creates drag, so the least we can run gives us still more down force. And that helps us run quicker with more traction on a slippery track."

YOUR TEAM WON ITS 200th FUNNY CAR WIN IN TOPEKA THIS YEAR, AND NOW ITS WON THE 200th WIN FOR FORD. WHAT DOES IT FEEL LIKE TO BRING HOME SUCH A MEANINGFUL VICTORY? John Force, driver of the Castrol GTX High-Mileage Ford Mustang. “It’s pretty awesome for Ford Motor Company, a company that’s fought to survive in this economy, and every win helps them sell another car. That’s what it’s all about, another Ford product. For this team, along with so many drivers who won through the years, to put it together with Robert Hight, with Ashley, and myself, and now Mike Neff. We did it as a team with Ford and that’s what really makes it exciting to us, that everybody works together to get the job done."

TALK ABOUT HOW FORD HAS PLAYED A PART IN YOUR CAREER. “The first race car I ever drove was a car built by Jack Chrisman. It was a rear-engine Sidewinder Mach 1 Ford with the motor sitting sideways in it. But it was a Ford, single-overhead cam. Blown nitro. It was awesome. I never won any races with it, but that’s where I started. My roots. A lot of people don’t know that. Then finally with the Tasca family, Bobby and his grandpa (Bob Sr.) and his dad (Bob Jr.) getting me in with Ford. Best thing that ever happened to me. Best thing that ever happened to this team, because out of it came the BOSS 500 motor that you saw today just slip down this racetrack and ran low E.T. every round. And the chassis that we built with Ford Motor Company, with their engineers, the Eric Medlen Project, that we know we’re safe in. We believe it with all our heart. Ford changed my life and I’m going to stick by them until the end of my career. As long as they’ll have me. I’m just excited to be part of Ford Motor Company’s 200th Funny Car win in NHRA Full Throttle Series drag racing. Ford Motor Company, with all of your drivers, John Force Racing is proud to be a part of it."

MIKE NEFF’S WIN IS FORD’S 200th WIN IN THE NHRA FULL THROTTLE SERIES FUNNY CAR CATEGORY. TALK ABOUT WHAT A MOMENTOUS SEASON IT’S BEEN FOR YOU AND JOHN FORCE RACING. Robert Hight, driver of the Auto Club Ford Mustang. “Congratulations to Ford on 200 wins in Funny Car. That’s a major accomplishment. I got to win John Force Racing’s 200th win earlier this year and since then, every win has been in a Ford, so that’s exciting. Neff and I, we’ve been swapping back and forth. But for my name to be on a list with guys like Mark Oswald and Raymond Beadle and Kenny Bernstein, all these guys. Tony Pedregon, John Force, that is major. I think they said I’m third all-time for Ford. That is major. And you know what? I’ve got a lot of years ahead of me. I appreciate everything that Ford has done for us. Good job to Neff. Let’s go get 201. I believe, with the team that Ford’s put together, and the ‘One Ford’ approach, that we’re going to get 300."

WHEN YOU FIRST STARTED DRIVING IN THE NHRA FULL THROTTLE SERIES, DID YOU EVER THINK YOU’D HAVE SUCH SUCCESS AND BE THE ONE TO WIN JOHN FORCE RACING’S 200th TEAM WIN IN FUNNY CAR? “Never did I think that. Until you win a race, you don’t even know you can do it. You don’t even know if you have what it takes to be a champion. But to be a champion, like all the other Ford drivers, in drag racing, in NASCAR…we’ve got great teammates. Carl Edwards, Greg Biffle, David Ragan. Congratulations to him a couple weeks ago on his first win. Matt Kenseth. We have a great Ford program that Jamie Allison (Director of Motorsports, Ford North America), everybody at Ford has put together a winning attitude and I see a lot of wins in Ford’s future, in drag racing and NASCAR. Congratulations Mike Neff; congratulations Ford. Let’s keep it going."