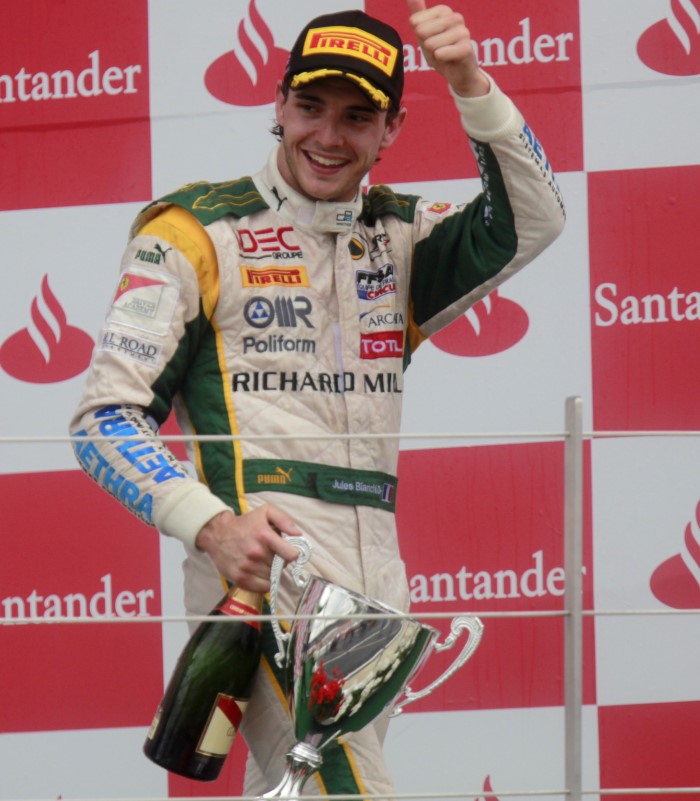 Jules Bianchi has claimed his first GP2 series win in mixed conditions in this afternoon's feature race at Silverstone, leading almost all the way from pole position to take the victory by four seconds from Christian Vietoris and Marcus Ericsson.

Yesterday's torrid weather revisited the famous circuit just before today's start, with the rain so heavy that the race had to be delayed by ten minutes and ultimately started behind the safety car. The field circulated twice before going live on lap 3: Bianchi led Alvaro Parente, Vietoris and Dani Clos across the line, while behind them Ericsson snuck past Max Chilton for fifth behind them.

With yesterday's rain driven chaos the points leaders started the race in unfamiliar territory, but were determined to get back to the sharp end as soon as possible: Giedo van der Garde stormed up from P19 on the grid to P15 in one lap, while title rival Romain Grosjean improved from P13 to P10.

The track was now drying, and pitstops were going to make a huge difference to a lot of people's races: the iSport teammates and Esteban Gutierrez were notably struggling in the changing conditions, and everyone was waiting to see who would make the gamble to switch to slicks first: Ericsson and Stefano Coletti made the move on lap 12, with Sam Bird and van der Garde in next time around.

It open the floodgates and the rest of the field followed their leads over the next 2 laps, with Vietoris stopping one lap ahead of Bianchi and making a huge time advantage: the pair fought wheel to wheel for the next few laps, swapping the lead all around the circuit as they looked for any advantage over each other.

It was the Frenchman who finally made a small gap from the German, and a string of qualifying laps afterwards saw Bianchi eke out his lead to claim his maiden win ahead of Vietoris. Ericsson took advantage of his early stop to leapfrog a number of drivers to close out the podium, while Grosjean's blistering pace saw him extend his lead in the title fight with fourth place and the fastest lap.

Bird finished fifth after an eventful race which saw him battling a variety of drivers for almost all of the race before stretching away from Dani Clos in the closing laps. Coletti will be buying the beers for his engineers tonight for a sharp strategy which saw the Monegasque driver move up from P21 on the grid to P7 as the checkered flag dropped, just ahead of van der Garde who held off a late race charge from Parente to claim pole position for tomorrow's sprint race.