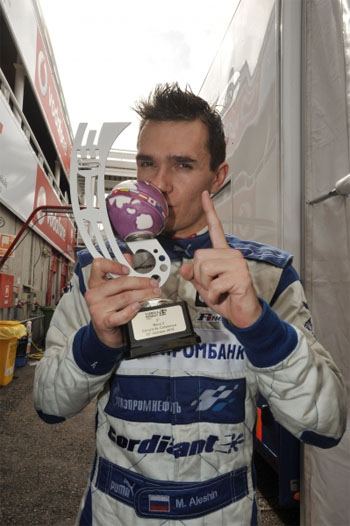 Mikhail Aleshin will become the first Russian racer to take the wheel of a Superleague Formula car when he gets behind the wheel of the new Russia team at the Belgian GP of the 2011 championship.

The 24 year old, who was born in Moscow, became the first Russian driver ever to win an international single-seater championship last year when he took the 2010 Formula Renault 3.5 series, after finishing runner-up in the 2009 FIA Formula 2 Championship. He has also tested for the Renault F1 team.

“It is great to be coming to Superleague Formula and to race for Russia", says Aleshin. “I’ve watched the series on TV and I’ve been told how good the cars are to drive. I know some of the guys on the grid and there are some very good racers in the championship. I’m confident that I will be quick straight away, and I hope to be challenging from the very beginning."

The Russia car (nÂ§ 17) will be prepared by the Cardiff based AtechReidGP squad.

“Mikhail is a great signing for AtechReidGP and Superleague Formula", said Anthony Reid, Team Manager of AtechReidGP. “Anyone who can match results with, and then beat a driver of the caliber of Daniel Ricciardo is certainly going to be a contender. It’s great that as a championship we can attract drivers like Mikhail, who is young, hungry, fast and ambitious."

Next grand prix of the 2011 Superleague Formula Championship takes place at Zolder in Belgium on July 16 / 17.