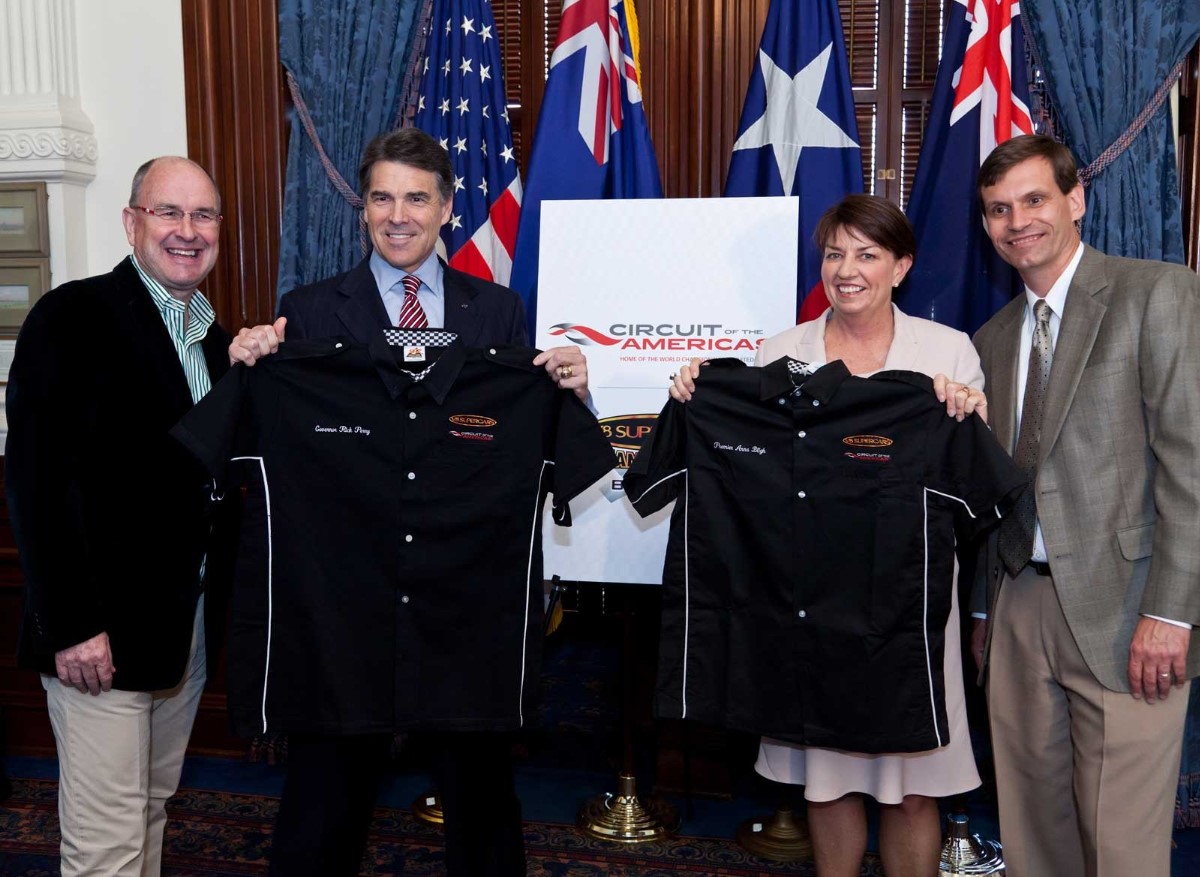 UPDATE A reader writes, Dear AR1.com, Interesting to see that the Australian Surfers race promoter who IndyCar dismissed by no longer racing in Surfers Paradise, Australia put it too IndyCar by showing them that a race series can indeed race internationally by pulling the reverse on IndyCar by coming to race in their backyard and on what is sure to become Americas best road circuit. With F1, MotoGP and now V8 Supercars racing at the Circuit of the Americas (and probably one of the NASCAR series), IndyCar finds themselves on the outside looking in once again, cancelling a huge road race and choosing instead to race at loser tracks like Milwaukee, New Hampshire, and Fontana where you will be able to shoot a canon into the grandstands and not hit anyone. Like he was with the Milwaukee race, Randy Bernard has been buffaloed by the die-hard oval minions who have his ear into thinking IndyCar must maintain a balance of 50% oval races even if that means racing in front of near empty grandstands and coming out looking like a complete and utter loser. Steve Lockwood, Dallas, Texas

“While Texas has established itself as the nation’s place for business, it’s quickly becoming the nation’s place for big sporting events, as well," said Governor Rick Perry. “V8 Supercars now joins Formula One, MotoGP, NASCAR, the NFL, NBA, NCAA and USTA, among the many that have chosen Texas to host major events in the last few years. This is more good news for the Lone Star State, and will provide a significant boost to the economy of Central Texas."

“The addition of V8 Supercars into our lineup at Circuit of The Americas will add to what we already know will be a rich and exhilarating fan experience," said Steve Sexton, President of Circuit of The Americas. “We’re thrilled the racing world is so excited about our facility. Austin is poised to become the premiere North American destination for international motorsports. In addition to hosting the 4 wheel and 2 wheel world championships, the United States will now enjoy the world’s best touring car series here in Austin."

V8 Supercars is among the fastest growing motorsports in the world. The Fédération Internationale de l'Automobile (FIA) recently sanctioned it as an international series. The series is enormously popular in Australia and New Zealand and will be making its first entrance into North America at Circuit of The Americas.

Additionally, SPEED™ will televise the two 200-km (124-mile) races live and in full throughout North and South America.

“I can’t describe how excited we are to bring the V8 Supercars race to such a spectacular facility. With Formula 1 racing, MotoGP and now V8 Supercars, it’s obvious Circuit of The Americas will be a top-notch destination that houses the best racing on earth, and we are thrilled to be a part of it," said Tony Cochrane, Chairman of V8 Supercars.

“We have expanded V8 Supercars’ geographical influence over the past few years with plans to stage up to six races each year to complement our existing events in Australia, New Zealand and the Middle East," added Cochrane. “Our entrance into the United States marks a new day for the series and we’re excited for Americans to experience what has made V8 Supercars so popular in many places around the world."

Formerly the Australian Touring Car Championship, the current series was devised in 1993 and branded as “V8 Supercars" in 1997. The cars are based on modified versions of Australia’s two most popular – and most rivaled – passenger cars, the Ford Falcon and Holden Commodore.

V8 Supercars continues as one of Australia’s largest sports both in attendance and television viewership. In 2010, approximately 1.7 million people attended V8 Supercars events, including V8 Supercars’ 20 millionth spectator at the Supercheap Auto Bathurst 1000.