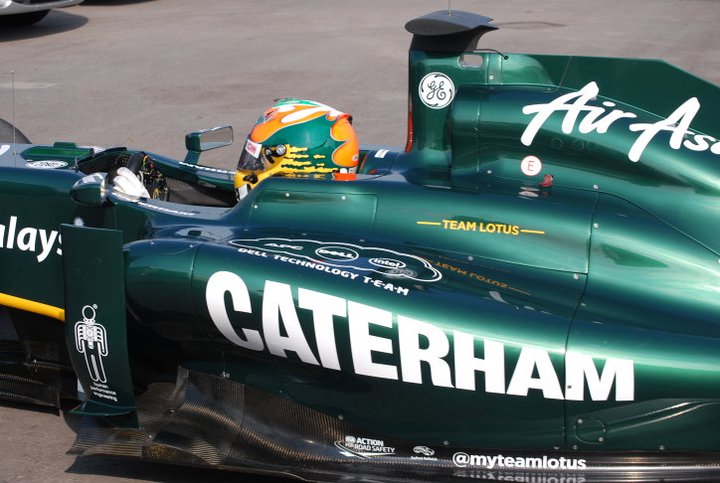 The full effect of the FIA move takes effect this weekend at Silverstone, and Marko said last month that it "definitely favors Ferrari" because the Italian team's solution has not been as effective as Red Bull's and McLaren's.

Ahead of Silverstone, McLaren's Hamilton told the Daily Star: "Ferrari are on the right road and I heard that, with the regulation changes and teams complaining, Ferrari have not complained once.

"That gives me a feeling they are quite comfortable."

Ultimately, however, the experts do not expect the clampdown to radically transform the current pecking-order, with Red Bull out front and Sebastian Vettel dominating.

"I think I'm the only guy out there trying to beat him at the moment," said Vettel's teammate Mark Webber.

"For someone to outscore him by 80 points is going to take some doing."

So clear is Red Bull's dominance that rumors insist Hamilton is still considering moving to the energy drink-owned team, where Webber is yet to be re-signed for 2012.

But the Australian insists whether or not he stays is up to him, revealing that Red Bull is "very keen" to offer him a new deal.

And as for Briton Hamilton's famous visit to the Red Bull motor home in Canada, the Guardian quotes Webber as jeering: "I could give you a cracking one-liner to that mate, but I won't."

Newey not ruling out Ferrari switch
(GMM) Adrian Newey has refused to completely dismiss suggestions he might end his formula one career with Ferrari.

Amid the famous Italian team's current struggles to catch up with dominant Red Bull, it has been suggested the first move by Ferrari should be a new high-price offer for the energy drink-owned team's gifted designer.

Briton Newey, however, is quoted by Italy's Tuttosport and Corriere dello Sport as insisting he is happy with his current employer, where he inked the dominant RB7.

"I think my career has been varied with several changes of teams but I'm now very happy with Red Bull. I really can't see myself in another place," he said.

Newey refuses, however, to completely rule out the possibility of a move to Maranello.

"I don't know what I'm going to do at some point in the future, I have no idea," he said.

"There are several teams looking to me and once I conclude the project here at Red Bull, I will look at the offers.

"But if I did do something else, I think it would be something very different from F1," added Newey.

Near-identical Skoda Fabias was used for the recreation in Poland, where they were shot at 110kph against the arm-co at a 20 degree angle, and then compared to the same crash on a stretch of arm-co that was properly installed.

Montezemolo said in May that there is "no question" Ferrari will honor its 2012 contract with the Brazilian, who struggled markedly in 2010 amid rumors Mark Webber or Nico Rosberg might be drafted in to replace him.

The rumors only intensified when Fernando Alonso's contract was extended through 2016, raising suggestions Massa's days at Maranello are numbered.

When asked about Ferrari's driver lineup this week, Montezemolo told La Repubblica that Spaniard Alonso is "a great driver".

"I am very happy to have signed a contract with him for a long cooperation, as we had with Michael Schumacher in his time," he said.

"The fact that we will be together at least until 2016 is confirmation that both parties are happy with this relationship.

"I am also very happy this year with Felipe, who is reacting very well. We are pleased with our drivers; we need to improve the car to get Ferrari back where we want to be," added Montezemolo.

Artificial DRS makes F1 'boring' – Villeneuve
(GMM) Jacques Villeneuve on Monday admitted he has given up on formula one.

Last year, the 1997 world champion was pushing hard to make a comeback, but at Williams' headquarters in Oxfordshire he admitted he no longer even watches the races.

"I just can't be bothered. Halfway through the race I'm yawning and it's really tough … and I just get upset," the 40-year-old told Reuters at the launch of his former team's new engine supply deal with Renault.

Villeneuve explained that his major qualm is with the DRS overtaking system, which he has previously denounced as "too artificial".

"When I see these guys not even being able to defend, like Michael (Schumacher) — he should have been on the podium in Montreal," he said.

"All the … overtaking with the DRS, I'm just falling asleep … useless, boring, it's not even racing."

He is also critical of the amount of penalties handed out to drivers like Lewis Hamilton for banging wheels with his rivals.

"It's fun, it's a good show, the fans are up in the grandstands and they can scream and shout about it … that's good, that's what you want," said Villeneuve.

In addition to the Caterham logos, new sponsor GE's colors will also be on the Lotus cars from Silverstone.

"This is a big race for us, both in terms of track performance where we want to keep bringing down the gap to the midfield, and because we will see the GE and Caterham logos on the cars and across the whole team for the first time," said Fernandes.

"Being able to race with two such important additions to the team is a very big step forward for us – our partnership with GE is a clear sign that one of the most important members of the global business community shares our vision for the future of our team, and the plans for Caterham will start being revealed very soon."

"The long-term strategy for the Caterham Group is taking shape and we are all very excited about the direction we are taking, as I am sure our fans and our partners will be too.

Mansell advises Hamilton to stay at McLaren
Lewis Hamilton should remain with McLaren instead of switching to a rival team, in the opinion of 1992 World Champion Nigel Mansell. After missing out on the title in 1986 and 1991, notably, Mansell won his title for Williams in what was his twelfth full Formula 1 season in 1992.

“He hasn't exactly had a drought," Mansell is quoted as saying by BBC Sport when talking of the 2008 title winner, who is currently in his fifth F1 campaign.

“I'd stay with McLaren and the people who've supported him in thick and thin. You'd have to be fortunate to be offered (a Red Bull drive) but, for me, Lewis has had an amazing career with McLaren.

“Michael Schumacher proved that – by staying with Ferrari – if you can have the support of a team totally behind you, then you can build on that year on year. Lewis is a racer and a fighter but the thing he hasn't got quite right is, when you pass people, don't try and knock them off!

“Still go for the gaps but give them a little room and don't do it on corners where there is no recovery. He's just got to get it a bit more right than what he has done in the last few races."

Force India to present F1 Art Car
Force India has teamed up with motorsport artist Dexter Brown ahead of this weekend’s British Grand Prix. The result is the Art Car – a transformed VJM01-05 race car, driven in 16 races by Giancarlo Fisichella in 2008 – which will be on-show at Silverstone before being auctioned off for charity later this year.

An official presentation for the Art Car will be taking place during Force India’s post-race party at Silverstone on Sunday, with all funds from the later auction then going to London’s Great Ormond Street Hospital for Children.

“Seeing one of my F1 cars transformed into a painting is a wonderful initiative that combines two of my greatest passions – cars and art," says Team Principal and CEO Vijay Mallya. “I wish to thank Dexter for producing this exquisite piece of work, which I am sure will be of great interest to art collectors around the world and will raise valuable funds for charity."

“When I was approached by Erik Meijer to paint an Art Car, I was immediately excited by the project," adds artist Brown. “Of course, it’s not the first car I’ve painted, but it’s the first time I’ve had the chance to work with a modern Formula 1 car. The last car I painted was a BMW in Genoa in 1993, but the Formula 1 car was a different challenge because I had to work around the complex bodywork."