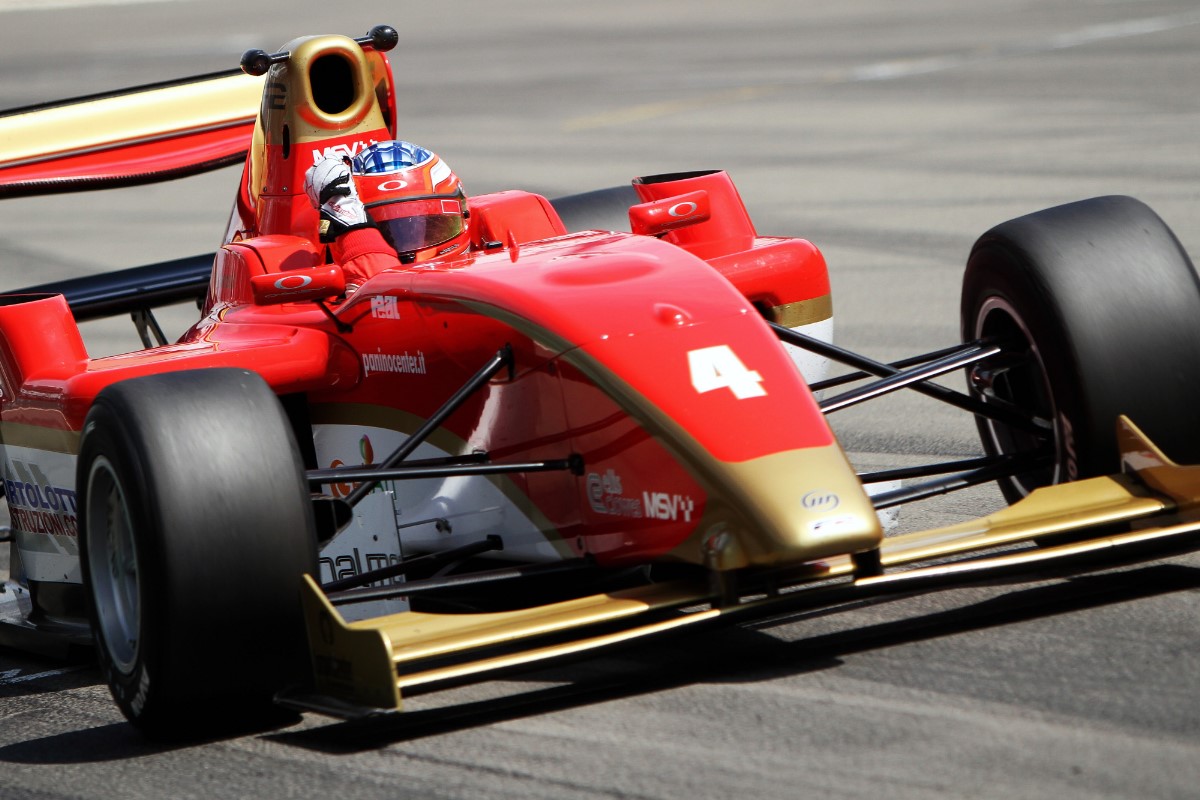 Mirko Bortolotti completed a clean sweep in the FIA Formula Two Championship at the NÃ¼rburgring today (Sunday), following up this morning's pole position with another well-judged victory and fastest lap. The Austro-Italian's domination of the Eifel circuit gives him a handy lead over Christopher Zanella in the championship at the halfway point.

Bortolotti's Swiss championship rival drove another canny race to finish third behind Will Bratt, who kept the pressure on the leader for much of the distance.

21-year-old Bortolotti held his lead into the first corner, with Bratt following him out of the stadium section in second. Meanwhile the German pairing of Tobias Hegewald and Johannes Theobald lay in third and fourth positions as Zanella, Mikkel Mac and Alex Brundle followed closely behind.

Whilst the top three started to make a getaway, Johannes was unable to respond and a queue of cars formed behind him. Zanella soon found a way past and Brundle was next to attack. However, his late move at the chicane tipped the German into the air with his car rolling twice before becoming beached at the scene and leading to the championship's first ever safety car period. Theobald walked away albeit a little shaken.

It didn't take long to recover the car and racing resumed with Bortolotti leading once more with Bratt initially responding but unable to get close enough to pass. However the race leader was not about to let this one slip and he gradually pulled away from the Brit behind him.

Zanella was now the one-to-watch and he started to put Hegewald under increasing pressure. This had the effect of compressing the field as the top two began to pull away. After coming close on several occasions the 21-year-old finally made his move on lap 17 with Hegewald managing to keep fourth place from Brundle at the flag.

Mac finished in fifth place, after a very impressive weekend for the Danish rookie, whilst Miki Monras beat Jack Clarke to the line for seventh. Jordan King and Ramon Pineiro completed the top 10.

Speaking afterwards a delighted Bortolotti said: "It's been a really fantastic weekend and I'm very happy. In the second race I got a good start and began pushing a lot. I knew it was going to be tight though and that Bratt might try to use his boost on the long straight but he never came close enough. I tried to save some of my boost for the end and then after the safety car I got my rhythm back and got the win which I'm very happy about."