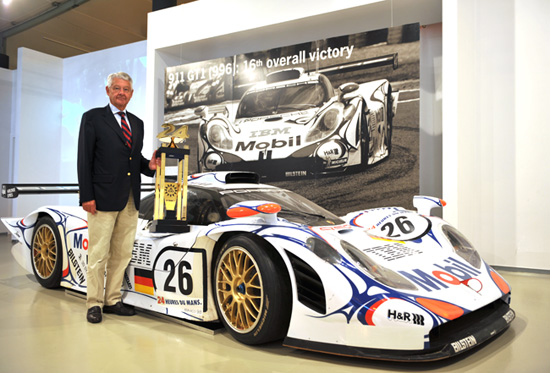 Following the announcement that Porsche is coming back to the Le Mans 24 Hours, the Automobile Club de l’Ouest wishes to congratulate the company on its decision given its historic links with the Le Mans 24-Hours myth, and is again ready to take the fight to the prestigious competitors that are already locked in battle in the race.

The Porsche-Le Mans story is a long one. The German make has built its sporting legend in the Le Mans 24 Hours. It first entered the Sarthe classic on an official basis in 1951. Since then, Porsche has won the race outright on sixteen occasions, a record. Its first overall victory came in 1970 thanks to the mythic 917 (Herrmann-Attwood), and the last was in 1998 (Aiello-McNish-Ortelli) at the wheel of the powerful 911 GT1.

In addition, the links between the Automobile Club de l’Ouest and Porsche were strengthened at the start of 2011 with the implantation of the prestigious Porsche Driving School in France on the Le Mans circuit. Since then, the manufacturer’s only driving school in France has met with great success.

To conclude: the 24-Hours museum currently hosts a Porsche at Le Mans exhibition, which Mr. Jean-Claude Plassart, the Automobile Club de l’Ouest President, visited to render homage to the past and future of the make in the Le Mans 24 Hours.

Jean-Claude Plassart, President of the Automobile Club de l’Ouest: "We’re delighted that Porsche is making its comeback to the Le Mans 24 Hours in the LM P1 category while still racing officially in the LM GTE categories. Historically speaking, Porsche is a make closely linked to our event in which it still holds the record for the highest number of victories. That it is coming back to try and improve this figure is great news. It is also recognition of the work carried out by the Automobile Club de l’Ouest in the context of its regulations: Porsche in its announcement praised the evolutions and the interest of the regulations that open the door to new technologies. Finally, this announcement shows the ever-increasing prestige of our blue riband event."

Vincent Beaumesnil, the Automobile Club de l’Ouest’s Sports Manager: "It’s obvious that this return heralds the arrival of a new technical approach in the LM P1 category. We’re already working on the 2014 regulations, and Porsche will be one of the major participants in these discussions. Its contribution to our talks can only be of capital importance given this company’s past, and the immense experience it has accumulated in endurance racing. We’re very happy as not only will we have an additional make in LM P1, but also a manufacturer ready to explore new technological avenues."