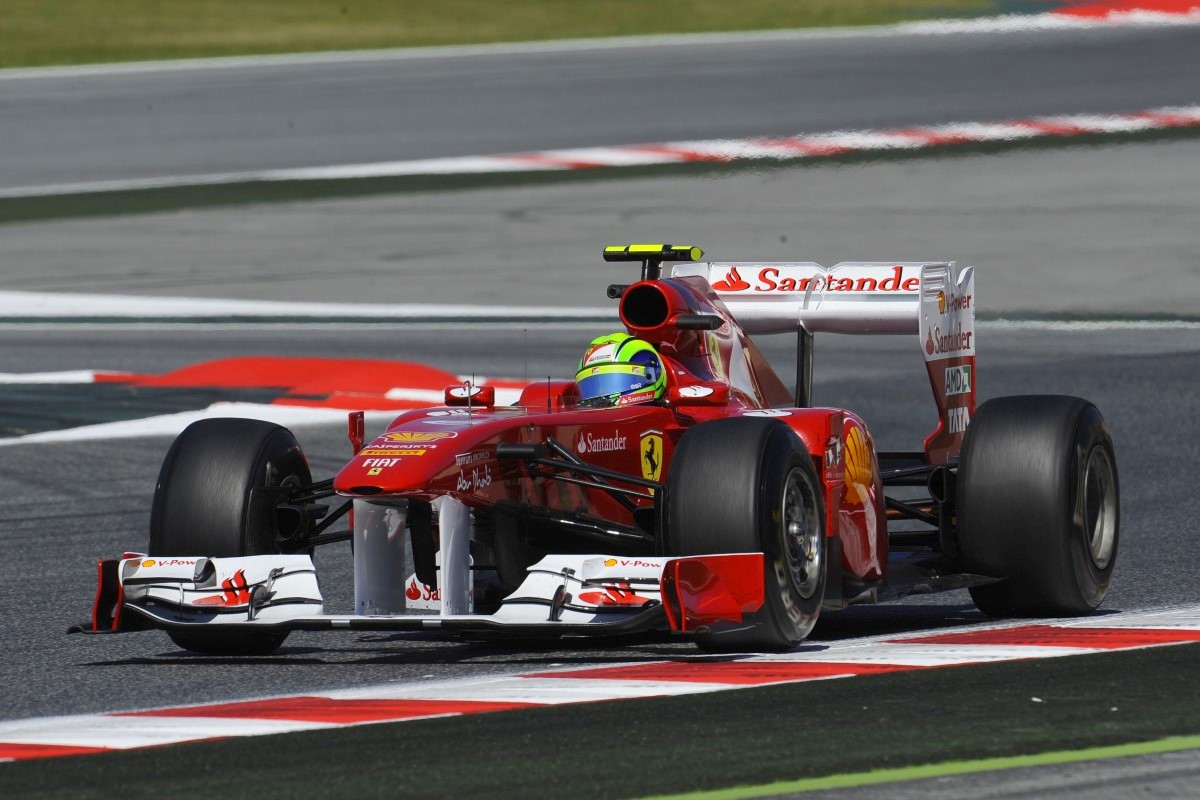 The Australian rookie, 22 on Friday, will switch from being Red Bull junior team Toro Rosso's Friday driver to a full race cockpit at Silverstone next weekend.

It was believed that a Toro Rosso driver would be moved aside this mid-season for Ricciardo's debut, but both Jaime Alguersuari and Sebastien Buemi have impressed sufficiently to stay with the Faenza based team for now.

"This agreement is a reward for all the hard work Hispania has shown since we started in formula one," said team owner Jose Ramon Carabante.

"We're proud that the formula one world champion team has trusted us in their effort of developing their drivers. Let's hope that this is just the start of a fruitful relationship."

It is believed that Narain Karthikeyan will sit out Silverstone, but HRT is yet to formally announce Ricciardo's teammate for the British grand prix.

Indeed, the Spanish team said both Karthikeyan and Vitantonio Liuzzi remain "official drivers" for 2011, with sources telling the media that Karthikeyan will be in the cockpit for the inaugural Indian grand prix in October.

Red Bull, meanwhile, confirmed that Ricciardo will split his new F1 racing duties with his season in the Formula Renault 3.5 series.

But he will not be able to continue driving for Toro Rosso on Fridays, causing French commentator Jean-Louis Moncet to speculate that Red Bull's next up-and-coming youngster Jean-Eric Vergne will take over that role.

Experts say Ferrari no longer in charge of F1
(GMM) The days are over when Ferrari is seen to enjoy a position of privilege in formula one.

The former, who writes for the O Estado de S.Paulo newspaper, said Pirelli's choice of tire compound for next weekend's British grand prix is proof Ferrari can no longer overtly exert its influence.

The Italian team very publicly pushed for the official supplier to avoid its hardest compound for Silverstone, but Pirelli insisted that its final decision was the result of equal consultation with all 12 teams.

"Today's reality for Ferrari in formula one is different," wrote Oricchio, referring to the period when former Minardi owner Paul Stoddart quipped that FIA actually stands for Ferrari International Assistance.

Newey, who during that period a decade ago was with McLaren, remembers it well.

"There was a period around 2002 when there seemed to be so much politics in F1, particularly between Ferrari and the FIA and what they were allowed to get away with," he told The Sun.

"I became disillusioned with the whole sport and started to look around for what else I could do. I needed a fresh challenge and found it with Red Bull. I am really enjoying it at the moment," added Newey.

That is the view of Red Bull team principal Christian Horner, who in the past days has admitted it is "very, very likely" Australian Webber, 34, will be offered a new contract for the 2012 season.

The reigning champions have reportedly toyed with the idea of signing Lewis Hamilton or perhaps Nico Rosberg but have instead decided to stick with Webber for at least another year.

Webber has struggled to match runaway championship leader Vettel's pace in the dominant RB7 so far this season but at Valencia qualified on the front row and was only narrowly beaten to second place by Fernando Alonso.

"I think it was the closest I have been (to Vettel) for a while," admitted the driver. "I think it's getting better."

Webber has said he has struggled to adjust following the departure of long-time tire supplier Bridgestone.

"It was the best race of the season from Mark in terms of the performance from the tires," Horner, referring to Webber's podium at Valencia, is quoted by France's L'Equipe.

"He has never been this close to Seb (in 2011) and he controlled it well. I hope he will stay on his (Vettel's) heels because it's no secret that he has had problems with the tires this year.

"Now he understands them better," revealed Horner. "Just look at the difference in this race; for 90 per cent he was 4-5 seconds from Seb. I hope this result gives him great confidence for the future."

Webber won last year's British grand prix at Silverstone, famously scowling on the radio afterwards that it was "Not bad for a no.2 driver".

"The characteristics of the (Silverstone) circuit have suited us well in past seasons. The test will remain if it's the same this time around," he said on Thursday, no doubt referring to the FIA's blown exhaust clampdown.

Future 'bright' not clouded for Renault team – Boullier
(GMM) Eric Boullier has hit back at reports the Renault team is not in good financial health.

The rumors began to emerge during the Monaco grand prix weekend, with team boss Boullier suspecting they might have been maliciously spread by his predecessor Flavio Briatore who was conspicuously present in the Principality.

Some media sources claim that Frenchman Boullier is so unhappy about the possibility Briatore could be behind the rumors, including reports of alleged debts to team engine supplier Renault, that he is considering defamation action against the flamboyant Italian.

"The future is very clear and bright," Boullier insisted to BBC Radio Oxford.

As for the source of the rumors, he said: "I understand there is some jealousy around in the paddock and some people who want to tease us.

"Affecting the morale of the people obviously was their target which was a bit naughty."

Following consultation with the various Formula 1 stakeholders and the current Formula 1 engine manufacturers, the WMSC has ratified the adoption of a V6 turbo engine to be used in Formula 1 from 2014 onwards. This required changes to the regulations initially adopted by the World Council on 3 June 2011. The full regulations applicable to the 2014 season will be published in due course.

2. Will a V6 use more fuel, or have inferior economy compared with the original proposal?

No. To push the engineers to develop engine efficiency, the technical regulation imposes a fuel flow control. When evolving the regulation to fit with the manufacturers' new request this parameter has not been changed. Thus the efficiency requirement will be unchanged.

No. This parameter has been updated from 12000rpm to 15000rpm to allow engineers more flexibility in power and energy management. However, as a consequence of the new architecture (V6) and the change in rev-limit, the engine will sound different, but will remain representative of Formula 1.

4. Will the increase in rpm alter fuel consumption?

Absolutely not. As mentioned above, the fuel flow limit will stay the same. The technologies are the same and as a consequence any increase in rpm will constrain the engineers to work harder on reducing friction and gaining on engine efficiency. The challenge will be even bigger than originally planned and will therefore enhance the technological lead of Formula 1.

5. Has the FIA retained the energy recover devices originally intended to be used in conjunction with the I4 engine?

Yes, the concept initially presented is respected. All of the technology intended for the I4 is still present. This new power plant will be a dramatic step forward in both fuel efficiency and in energy management.

6. Will those manufacturers already engaged in the development of a four-cylinder engine face increased costs now they need to redirect their resources toward designing a V6?

To our knowledge, five manufacturers were working on the proposed 4-cylinder engine. They will all need to adapt their project and this will surely involve some additional costs, depending on how advanced each project was. This evolution has been proposed and supported by all four engine manufacturers currently involved in Formula One.

7. Why is the introduction of the new generation of engines now being delayed by year?

The decision to delay the introduction until 2014 comes at the request of the four engine manufacturers currently involved in Formula One. Their request for extra time is linked to the change in architecture but also to ensure their projects are more robust (one of the goals of the project is to enhance engine durability to c.4000km)

8. Will these energy recovery systems and other efficiency devices ultimately influence the development of road cars?

Yes. The clear need for the automotive industry to reduce emissions means energy management will increasingly become a key factor in the development of more efficient powertrains. Kinetic energy recovery is already applied in Formula 1 and the introduction of exhaust energy recovery will add another technology route to be explored. Formula 1 will also return to its role as a developer of turbo-charger technology. This research will have real-world benefits, contributing valuable knowledge that will be of use to future road car development.

– Direct fuel injection up to 500bar