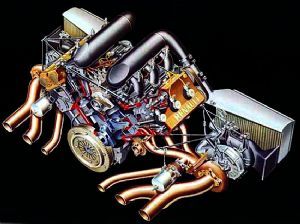 (GMM) Formula one engines will still sound good in the wake of the current V8 era, the governing FIA has insisted.

The unique noise produced by powerful high-revving engines has been an issue each time the regulations substantially changed, including when V8 engines became mandatory at the abolition of the V10 era for 2006.

But the proposed switch in 2013 from V8 to 1.6 liter four-cylinder turbo engines caused unprecedented angst, including from Bernie Ecclestone and the majority of his race circuit promoters, who threatened to boycott F1 if the cars sounded like "tin cans rattling".

But in a media document on Thursday, the FIA denied the rev increase for V6s was in deference to the sound debate.

"This parameter has been updated from 12,000 to 15,000rpm to allow engineers more flexibility in power and energy management," read the statement.

"However, as a consequence of the new architecture and the change in rev-limit, the engine will sound different, but will remain representative of formula one," claims the FIA.

The governing body also insists that the V6 engines will not use more fuel than under the defunct four-cylinder plan.

"The fuel flow limit will stay the same," read the document. "The challenge will be even bigger than originally planned and will therefore enhance the technological lead of formula one."

06/30/11 The FIA is adamant that the sound of the new generation of Formula 1 engines due to come into force in 2014 will be 'representative' of the contemporary power-units.

Following complaints from Bernie Ecclestone and race promoters about the spectacle of grand prix racing being weakened by an originally planned switch to four-cylinder turbos in 2013, F1's teams and manufacturers agreed an alternative plan for 1.6-litre V6 turbos which are limited to 15,000rpm from 2014.

And although that may not be enough to quell dissent among race promoters, who have threatened to ditch F1 races for IndyCar, the FIA says it has no concerns about the sound.

In a Q&A issued by the FIA on Thursday, the governing body explained the thinking behind the increased rev limit.

"This parameter has been updated from 12000rpm to 15000rpm to allow engineers more flexibility in power and energy management," stated the governing body.

"However, as a consequence of the new architecture (V6) and the change in rev-limit, the engine will sound different, but will remain representative of Formula 1."