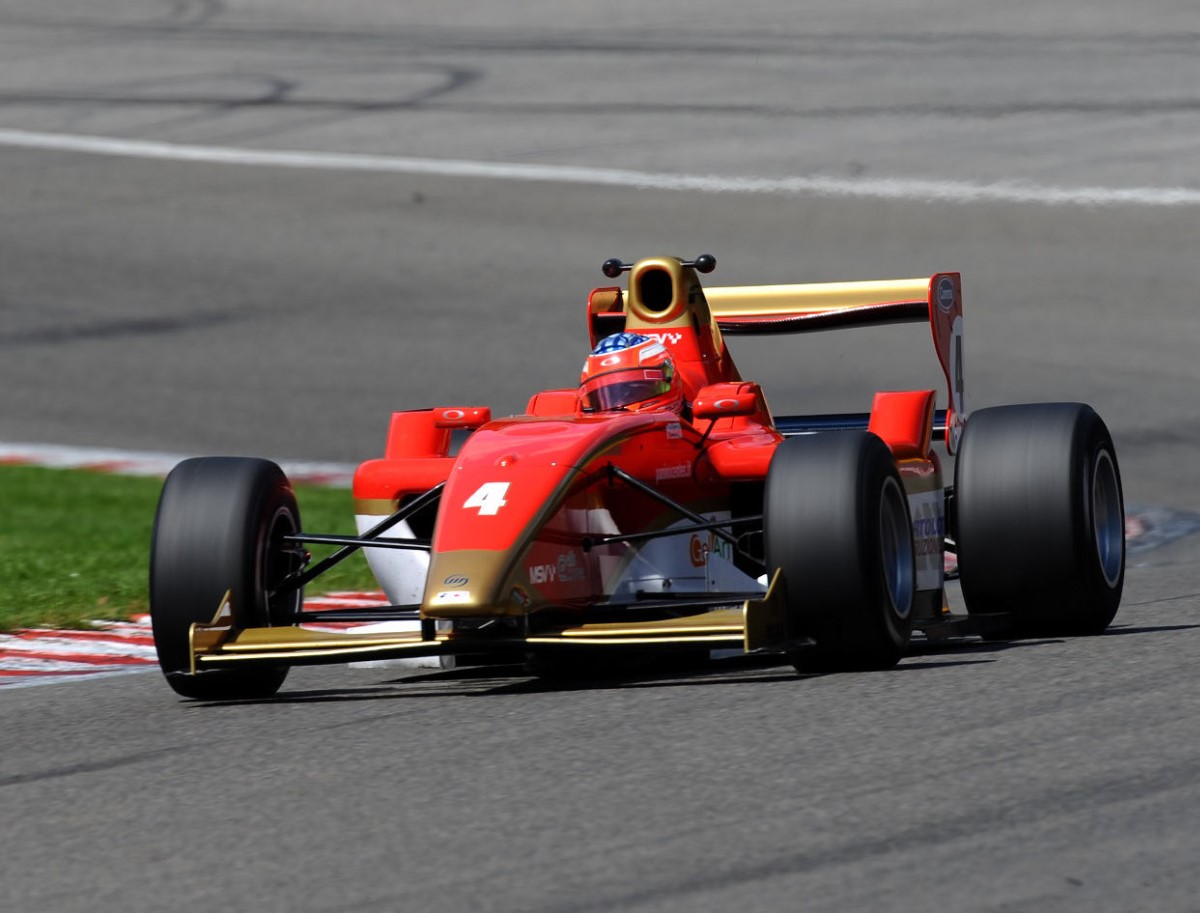 Mirko Bortolotti took a commanding win during round six of the 2011 FIA Formula Two Championship at Spa Francorchamps today (Sunday) and in doing so now leads the drivers’ standings – albeit by a margin of five points from Christopher Zanella.

Swiss driver Zanella secured second place, with pole-sitter Will Bratt third and Miki Monras and Mihai Marinescu rounding out the top five. A trio of Brits were next up with Jack Clarke, Alex Brundle and F2 newcomer Jordan King sixth, seventh and eighth respectively. Kelvin Snoeks and Thiemo Storz completed the top 10.

21-year-old Bortolotti started third as the 17-lap race got underway but made a great start and moved around the outside of pole-sitter Bratt into La Source to lead going into Eau Rouge. Meanwhile Ramon Pineiro had another first lap mishap after yesterday’s round five and spun at La Source, dropping him to the rear of the field.

In all the action at La Source, Tobias Hegewald moved up to second and young F2 debutant Jordan King was impressively up to third while Bratt dropped down to fifth.

King didn't stay there for long though and dropped to seventh, but nevertheless was able to lap at a solid pace to eventually finish eighth after a late battle with Alex Brundle.

Bortolotti and Hegewald broke away at the front, but Hegewald's challenge was to last just six laps as the German spun out at Les Combes while chasing down the leader. That gave the Italian a larger lead back to 21-year-old Zanella who was promoted to second with Bratt also elevated to third.

Zanella was never really able to threaten Bortolotti’s lead, and although he managed to take a few tenths out of his advantage on laps 11 and 12, Bortolotti was able to stretch the lead out to almost five seconds by the end of the race.

Further back there was action aplenty. Benjamin Lariche collided with Mikkel Mac at Les Combes on lap four, bringing out the yellow flags. The caution was to prove a hindrance for Miki Monras who was challenging Will Bratt. The Spanish driver got a great run on Bratt through Eau Rouge and pulled out of the slipstream only to notice the flags and had to back off. That was to be the closest Monras got to Bratt, although he continued to follow closely for several laps.

No sooner had the yellow flags gone back in they were out again for Hegewald's incident, while Johannes Theobald and Plamen Kralev also had a coming together at La Source on lap 11.

Mihai Marinescu started 12th on the grid, making constant progress, and secured fifth by blasting past Jack Clarke down the Kemmel straight after Eau Rouge on lap ten.

Speaking after the race a delighted Bortolotti said: "I got a good start and I knew it was going to be very tight going into La Source. I tried to go for the inside but Will [Bratt] closed the door so I had to go around the outside which worked out ok and managed to go through Eau Rouge leading the race.

"After that I was pushing quite a lot but still had to defend my position on the first couple of laps. Then I tried to get my rhythm and push as much as I can and open up a gap."

The next rounds of the 2011 FIA Formula Two Championship take place at the Nurburgring from 1-3 July.