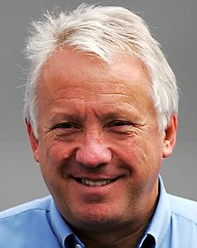 (GMM) The FIA is considering applying a second 'activation point' for the overtaking system DRS at Silverstone in two weeks.

At Canada and again this weekend in Valencia, there are two zones in which chasing drivers can use their adjustable rear wings in the race, but only one 'activation point'.

FIA technical delegate Charlie Whiting told reporters on Friday that the single activation point in Canada, where a chasing driver can trigger his DRS if he is within one second of his prey, was not adequate.

Fernando Alonso said he is more hopeful for the similar setup on the streets of Valencia on Sunday.

"There will definitely be more overtaking than in recent years, as in Monaco," he told Germany's Auto Motor und Sport.

Whiting, however, is not satisfied and is close to arranging for a second activation point to be applied ahead of the second 'DRS' straight at Silverstone in a fortnight.

If not, the chasing driver has "a double advantage", argues Rubens Barrichello, because "he can drive off with his flat rear wing" in the second DRS zone "even if he is already ahead".

But a dissenting voice is Nick Heidfeld's, who argues: "The whole point is that the faster driver can pass. If the slower one can attack immediately again, the first overtaking move was pointless."