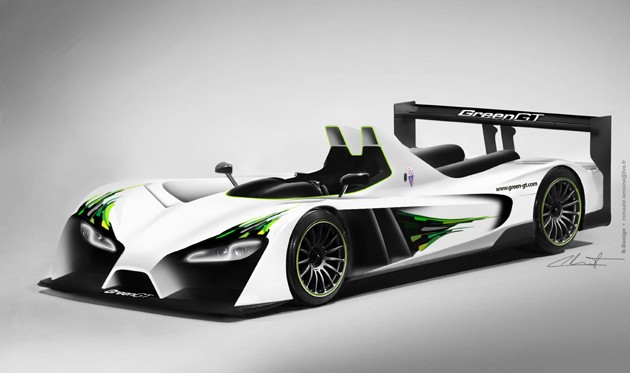 As part of the "Le Mans vers le Futur" (Le Mans Towards the Future) vehicle demonstration, the Green GT 300 kW racer and a number of other avant-garde cars were displayed during the 2011 edition of 24 Hours of Le Mans and did some laps around the famed French course. Next year, Green GT will circle the course for real with a new experimental prototype, the hydrogen-powered LMPH2.

The Swiss outfit has been invited by the ACO (Automobile Club de l'Ouest) to race as an experimental car in the 2012 Le Mans and will opt for hydrogen to store the needed energy in lieu of batteries only. The first version is expected to be completed this Fall and will have 100 kW (134 horse power) on tap while the final 300 kW (402 hp) machine should be completed in time for the event.

Le Mans-experienced driver Christian Pescatori will take the wheel for the development program. You can check out his skills after the break in a video featuring him tackling the track during the Le Mans vers le Futur in the current 300 kW battery-powered Green GT and read the official press release. As a bonus, we've thrown in footage of the same car and driver combo taking on the circuit that hosted the Grand Prix de Pau Electrique.

Le Mans, June 9, 2011 – The Automobile Club de l'Ouest (ACO) announced at its press conference today the invitation of the GreenGT LMP H2, as an experimental car to race at the 24 Hours of Le Mans in 2012.

Founded in 2008, GreenGT is a proactive and independent company, which conceives and markets clean and sustainable propulsion systems, applied to racing and innovation. This invitation by the ACO rewards three years of GreenGT's pioneering work in the field of high performance sustainable mobility.

After the GreenGT Sprint (2009), the CitroÃ«n Servile (2010) and the GreenGT 300 (2011), the Swiss GreenGT company has started the build of a LMP H2 prototype to race at the 2012 24 Hours of Le Mans. Based on an LMP chassis, the GreenGT LMP H2 will be fueled by hydrogen and integrate its own onboard power plant.

Considering the efficiencies of thermal and electric motors, a mere 150 g of hydrogen are enough to replace one liter of gasoline. The GreenGT LMP H2 will have 12 kg of hydrogen in 700 bar high-pressure tanks on board. Hydrogen can be produced by solar energy. When it feeds a fuel cell, it combines with the ambient oxygen to produce electricity and only steam is released to the atmosphere. Thus racing with hydrogen can be fully carbon neutral.

GreenGT will present a first version of its LMP H2, with a 100kW fuel cell on board, in autumn of 2011. A 300kW fuel cell version will follow. Christian Pescatori (6 times Le Mans driver, 2 times 2nd and winner of Sebring with Audi R8) will be the development driver.

The GreenGT LMP H2 will have all safety devices that GreenGT ahs already developed throughout its other three cars. The unique and patented GreenGT drive train, which is capable of torque vectoring, will see a Le Mans evolution from a technical standpoint.