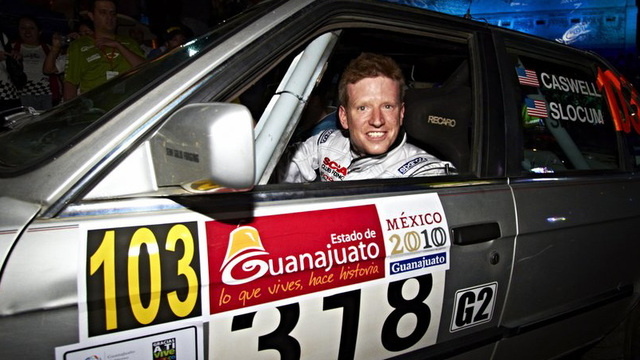 The film will tell the true story of Bill Caswell, an unemployed racing freak who famously bought a $500 BMW jalopy off Craigslist and used it to beat $400,000-plus rally cars in the Mexican leg of the World Rally Championships.

Caswell went up against pro teams in the Mexican event in a 1991 BMW 318i. Formerly a finance banker, Caswell left his job in 2009 to focus on rally racing in cars that he built, modified and fabricated himself — and gained recognition by placing third in the Rally America class of Rally Mexico.

Renner's already pegged himself in the lead role, but what about other characters? Who should be cast in Slingshot, the Bill Caswell movie?

Bill Caswell to be played by Jeremy Renner

Characters yet to be cast:

Melanie – Caswell's fiancée, the love interest.
Ben Slocum – Caswell's part-blind, co-driver sidekick.
Bill Caswell's Mom – The lovely lady that let Caswell build his rally car in her Chicago garage.
Paul Donlin – Friend of Caswell, co-drove in rally Colorado.
Evil WRC official – There has to be some kind of antagonist, right?
Roberto Mendoza – Opposite of Evil WRC Official. He's the WRC guy who helped Caswell get into the race.
Pedro Mooninite – The guy who moons Caswell on day three. (By the way, this is our bet for the Caswell cameo)
Sam Smith – The guy who wrote the story but didn't actually believe in it… even though he helped build the car.
Ray Wert – The editor who believed in the story but didn't actually write it… and is only on this list because he signs the paychecks.