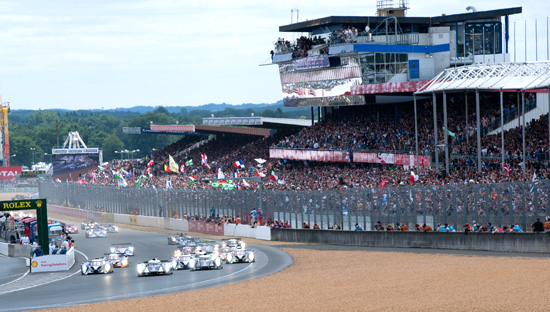 Compare that to Grand-Am's big race, the Rolex 24 at Daytona, where you could shoot a canon into the grandstands and never hit a single soul.

There should be a single sports car series in the USA – ALMS, which has close ties to LeMans. Instead the France family had to fracture the sport and create the Grand-Am series so that sports car racing in the USA can never reach it's full potential. And why, because the France family wants control. Sure, this is America and if they want to run their own series they can, but imagine how strong sports car racing could be if they would give up some of their control and join forces with ALMS.

But instead we have two weakened series, just like CART and the IRL had that almost destroyed the sport. The rumor Mongols will tell you the only reason Grand-Am exists is so the France family can ensure ALMS never gets too big, taking away from the monopoly they are trying to create with NASCAR, their bread and butter.

But that's big business and perfectly legal. It's just too bad for racing in America that it has to be that way.