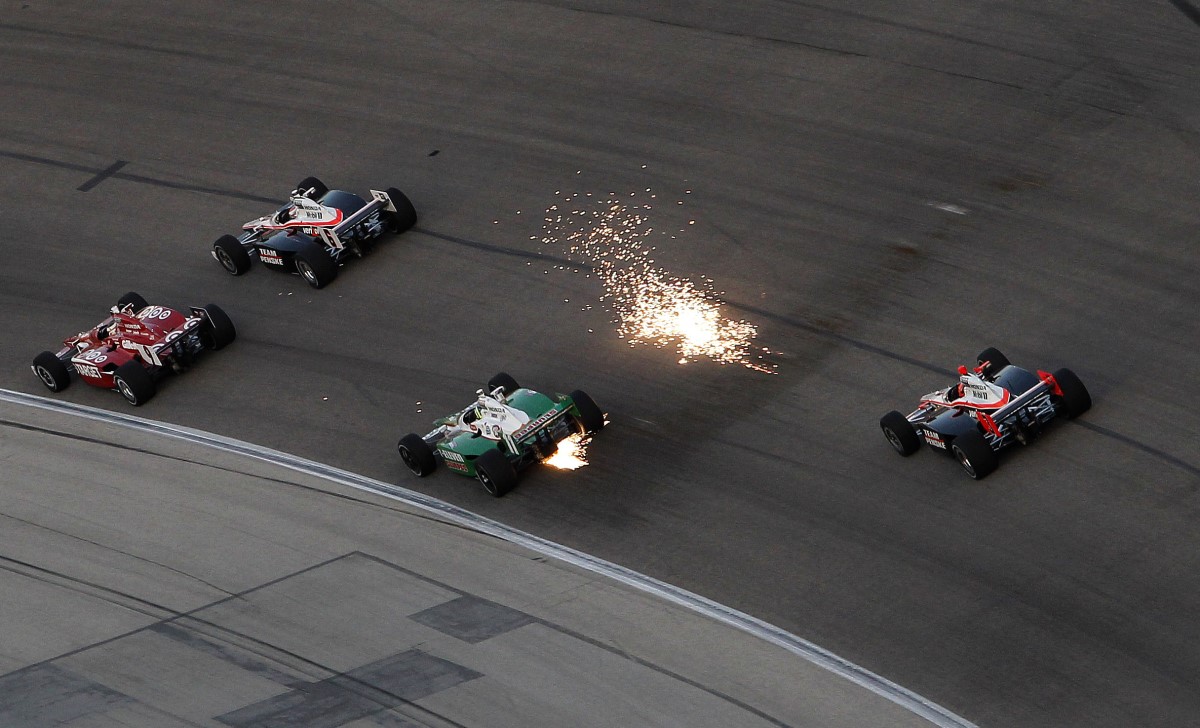 "We built (ratings) graphs in 15-minute increments and put the double-file restarts on the graphs," Bernard said. "In 14 of 20 restarts, we had small increases. It's too early to see if it's a solid correlation. But if there's any truth to that, it's pretty substantial." [Editor's Note: Indeed, race fans are physic – they had a vision a restart was coming so they switched on that channel to see it each time and they got a spike in the ratings. .]

The meeting was a show of good faith after Bernard was summoned by drivers to an impromptu gathering before the Indianapolis 500 that turned heated.

"I wanted to come in and say, 'Let's stay positive. We're not going on deaf ears,'" he said. "We're trying to break down what we're doing with the restarts and see how much of an impact it has on our ratings and on our exposure from the amount of stories being done. Restarts were the No. 2 covered story for May; (Indy 500 winner) Dan Wheldon was No. 1. That's pretty telling."

Of course, much of the coverage leading up to the race centered on drivers' apprehension about having double-file restarts make their oval debut in the season's biggest race. Implemented this season at the behest of Bernard (who admitted to lifting the idea from NASCAR), the new restart procedures led to mayhem in the season opener at St. Petersburg, Fla.

After some tweaking, the chaos diminished in the next three road-course races, but there still was plenty of trepidation about how double-file restarts would work in the tight corners of the Brickyard.

Tony Kanaan, who heads up a drivers advisory group with Dario Franchitti and Justin Wilson, said the tone of Friday's meeting differed greatly from Indy when Bernard virtually walked into an ambush of angry drivers.

"He got caught by surprise," Kanaan said. "I apologized to him afterward. I said look, 'We didn't want to put you on the spot.' This time we all came in thinking we're going to get our rear ends kicked, but it did not go that way. It was the way it was supposed to be: a pleasant meeting."

Alex Tagliani, who won his second consecutive pole position Friday with a 215.186-mph lap, was among the most outspoken at Indy but said he appreciated Bernard making the effort to solicit feedback.

"He listens to the drivers and wants to do the best things for promoting the league and making sure the drivers are safe," Tagliani said. "So there's a continuing conversation to make sure everyone has a voice and brings up opinions to make sure we have good starts and restarts. It's good for the show. Randy is very aggressive in making sure everything he brings to the series to make it better, he brings it to the drivers as well because it's us on the racetrack. So I really appreciate that from him."

Franchitti, who was bumped from the pole late in Friday's session and will start second in Saturday's first race, said the meeting was "very productive," but he'd expected it after restart procedures were tweaked at Indy.

"One of the good things we saw were drivers and team owners working together to come up with a solution," he said. "One was having the double-file restart in Turn 3 as opposed to the start-finish line. That was the decision arrived at and approved from drivers, team owners and IndyCar. When that happened, it completely just changed the atmosphere, and it was a lot more positive."

The restarts aren't expected to cause many problems on the wide surface at Texas, where drivers ran three wide in practice Friday and have multiple passing lanes.

Kanaan, who initially opposed the Indy restarts but "ate my words" afterward, said the series had a good formula for ovals but still needed to adjust double-file restarts on street and road courses next y ear.

"If you hear the fans, they love it," the 2004 champion said. "And we're here for them. But we also need to find a compromise; we can't keep wrecking eight or nine cars every time, which we didn't do at Indy.

"We should not change until the end of the year. Then we go back and say, 'What can we tweak?' We should go to every single type of track before we judge anything."

Bernard also recommended waiting until 2012 before making more revisions, but it's clear the rule is here to stay.

"Fans love it," Bernard said. "It was great to hear (four-time Indy 500 winner) Rick Mears say, 'Randy, that was very exciting. I was up on a spotter on Turn 3 and the announcer asked if fans liked double file, and it was the loudest applause of the day.' One of the greatest drivers of all time thinks it's giving value to the property." USA Today