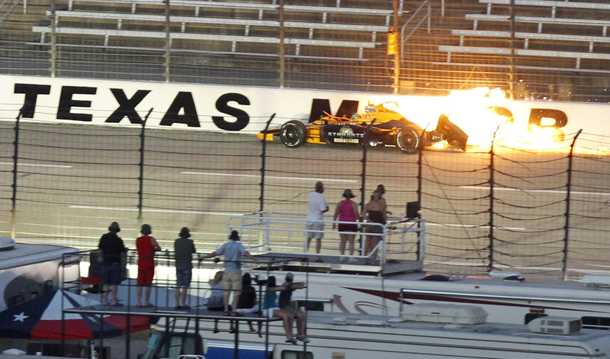 For Danica Patrick, racing at Texas Motor Speedway is "IndyCar at its best." The 1.5-mile oval also is a reminder of how she thinks the Izod IndyCar Series could be better.

During a news conference prior to practice and qualifying for Saturday night's Firestone Twin 275s, the circuit's most popular driver made some pointed comments about the series' shift toward road courses.

The Indy Racing League was an all-oval series at its 1996 inception but gradually has moved toward a more balanced schedule since it began adding road and street courses in 2005. The trend accelerated with the 2008 absorption of the Champ Car Series (which brought street and road circuits in Long Beach, Calf., Edmonton and Toronto). Since CEO Randy Bernard's reign began last year, the series has severed its relationship with the ovals of the International Speedway Corp. and dropped Chicagoland, Homestead and Kansas this year.

Those are all 1.5-mile ovals, and Patrick says Texas' tight, intense competition serves as a reminder why such superspeedways are needed.

"This is how we started," she said. "This is the series that prevailed, and we were oval racing. I was disappointed to see that Motegi is not an oval anymore. That almost makes me feel like I have half the oval races for some odd reason in my mind.

"Unbelievably, in 2011, we have 10 road courses and seven ovals. It's a disappointing schedule, but it's what the schedule is."

The season originally was slated as a 50-50 mix of ovals and road and street courses, but IndyCar announced last week that its Twin Ring Motegi race would be moved from the 1.5-mile track to its road course because of damage from the March earthquakes in Japan.

Patrick, who made history at Motegi in 2008 as the first woman to win an IndyCar race, said she understood there were business reasons and circumstances beyond IndyCar's control that led to such decisions but added she'd been vocal to Bernard about the need for more ovals.

"It's good racing for us," she said. "I was disappointed (in 2008) when we lost Michigan (International Speedway), and everyone said it was the most dangerous track, but I think it was the best race we put on all year."

Hailing Texas' unique format (running a doubleheader for the first time in nearly 30 years) as inventive and alluring, Patrick suggested the series might try a "triple crown"-type promotion around Indianapolis, Michigan and California (which IndyCar raced from 2002-05).

"The mile and a halves are kind of where we came from, and it's great to see Milwaukee back on the schedule," she said. "That's like a Michigan for us. Lots of passing. Cars going off, cars changing, new tires making a difference. It reminds me of the Nationwide races. New tires are good, you have to take care of your car, there's two lanes.

"I've heard (series officials) want to oval race, but for some odd reason, we're much more skewed toward road-course racing. I don't pretend to know why." USA Today

[Editor's Note: Danica asks why not more ovals? Let us count the ways:
1. At most of them you can shoot a canon in the grandstands and not hit anyone.
2. When you crash the repair bill for the car is very high. And the medical bills for the driver can be even higher.
3. Ovals are NASCAR's baby. They will do whatever it takes to protect their turf. Hence why all IndyCar races on ISC/France Family ovals failed
4. Except for Indy, the high banked ovals require little driver skill. Easy flat is the common phrase used. Does require big kahunas though – one slip and you could end up in a full body cast, or as in the case of Sam Schmidt and others, crippled for life, or even worse.
5. If they are so popular, where are the fans? Indy and Texas are the exception.]