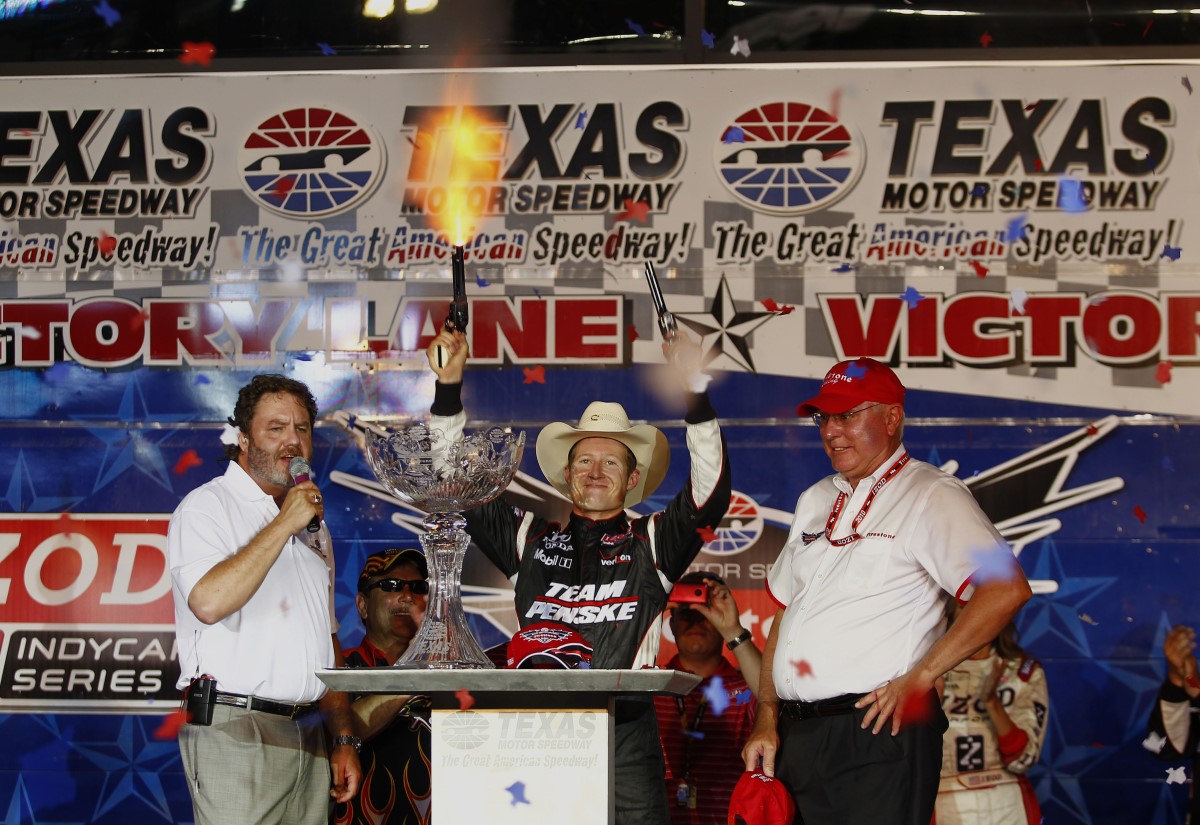 Tough at Texas: Team Penske has a tremendous track record at Texas Motor Speedway (TMS). The team has won six IZOD IndyCar Series races at the 1.5-mile, high-banked oval, including five out of the last seven events at the venue. Over the last six IndyCar Series races at Texas, Team Penske has led 770 of 1,512 laps of competition (51%). After a difficult Indianapolis 500 that saw all three cars finish outside the top-10, the team looks forward to returning to the TMS track this weekend.

Ryan’s Roost: Ryan Briscoe returns as the defending pole winner and champion of this race and he has fared well at TMS in his career. In his three starts for Team Penske at Texas, Briscoe has earned three podium finishes, one win and one pole and he’s led 274 laps of competition.

Lone Star Helio: Helio Castroneves has an impressive history at Texas as well. The three-time Indy 500 winner has produced three wins, a pole position and seven top-five finishes in 12 starts at TMS. Castroneves is looking to become the first four-time IZOD IndyCar Series race winner at Texas this weekend – he and former Team Penske driver Sam Hornish Jr. each hold the current record with three career victories at Texas.

TMS Rewind: Last season, Briscoe made it four wins for Team Penske in the last five races at Texas. Starting from the pole, Briscoe led four times for a race-high 102 laps in 2010 to earn his sixth career IZOD IndyCar Series victory. Briscoe captured the lead from Danica Patrick and led the final 36 laps to claim the checkered flag.

Texas Two-Step: This weekend’s Firestone Twin 275s mark the first Indy Car race doubleheader in nearly 30 years. Team Penske advisor and four-time Indy 500 winner Rick Mears swept the last Indy Car twin races at Atlanta in on June 28, 1981 so he’ll be in a unique position to advise the drivers on the best way to approach this weekend’s races. Qualifying for the first race will be held on Friday and the field for the Saturday night’s second race will be determined via live blind draw after completion of the first event. Each race will be 114 laps in length and the championship points/prize money will be half of a normal single race in the current IZOD IndyCar Series.

Pole Performance: Team Penske will be looking for its fifth pole in the first six races of the season during Friday’s qualifying session. Power won the first four poles of the season – all on road or street courses – before his streak was snapped at Indianapolis. Both Castroneves (2004) and Briscoe (2010) have won poles at Texas previously.

Power on Point: With wins at Barber Motorsports Park and Sao Paulo, Brazil, in the No. 12 Verizon car, Power continues to lead the IZOD IndyCar Series standings for Team Penske. Power currently holds a 194-178 point edge over Dario Franchitti in the chase for the series crown. Briscoe enters this weekend ranked seventh overall in points while Castroneves is 17th in the standings after a tough start to the season.

Briscoe Wins Again: Following his victory at Texas last season, Briscoe got a chance to experience another win at TMS on Wednesday. He beat fellow IndyCar driver and Indy 500 runner-up JR Hildebrand in a “boot camp" style obstacle course challenge set up at the speedway. Former Olympic gold medal sprinter Michael Johnson was on hand to present the gold boots award to Briscoe following his strong performance.

Sign of the Times: All three Team Penske drivers will meet with fans and sign autographs at the team merchandise trailer located in the midway at Texas Motor Speedway from 4-4:30 pm CT on Saturday, June 11.

WHAT THEY ARE SAYING ABOUT THE FIRESTONE TWIN 275s

Helio Castroneves: “Texas is a place with great energy and now with the doubleheader it’s going to be an even bigger thrill. I am really excited to start what may become a new tradition at Texas in the AAA Insurance car this weekend. The new format of the race will give it whole different feel and I am sure the fans will love it!"

Ryan Briscoe: “I have always enjoyed racing in Texas and the No. 6 car always seems to do well there. I'm very much looking forward to racing there again, this time with GuidePoint Systems on board as our sponsor. With the added excitement of the Twin 275's, it should be a great event. There is sure to be plenty of action and excitement for drivers and fans alike."

Will Power: “I think this will be a very interesting weekend with the two-race format. The start of the second race is going to require a lucky draw to get a good starting position, so that will likely factor in on the outcome of that race. We have been working hard on finding speed and hopefully the Verizon car will have a good pace this weekend."