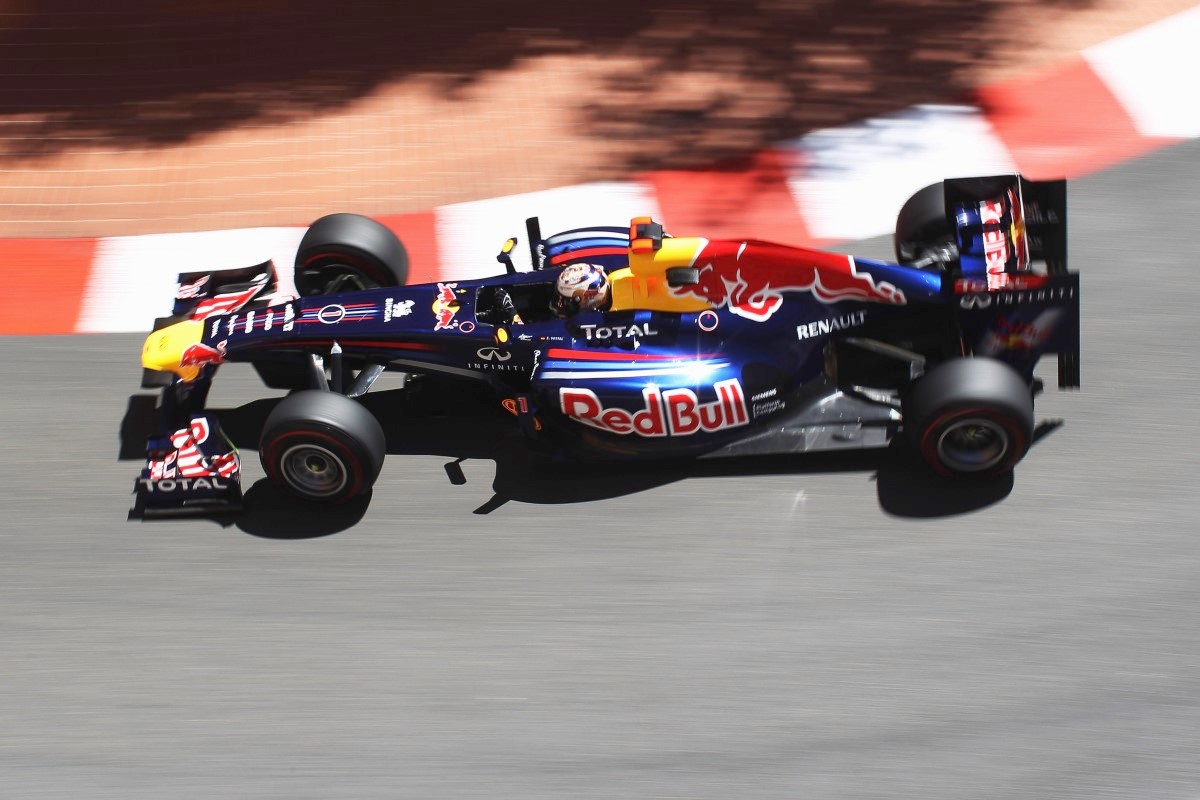 Two DRS zones but only one detection point in Canada
(GMM) There are two 'DRS' overtaking zones on Montreal's Circuit Gilles Villeneuve for the Canadian grand prix, but only one 'detection' point.

It will be the first time in 2011 that the adjustable rear wing system will be available to chasing drivers twice per lap in the race.

But the only 'detection' point will be at the exit of the tight hairpin, just before the first DRS zone begins on the long run down to the Wall of Champions chicane.

It means that if a driver was within 1 second of his prey at the hairpin, he will get another chance to pass him in the second DRS zone after the Wall of Champions.

Also, if he has already made the pass before the Wall, he will be able to trigger his wing in the second zone to pull away.

"You could actually lose two places," said McLaren driver Jenson Button. "If you're the lead car and there are two cars behind you, one of them can overtake on the first straight and the next can overtake you down the pit straight.

"But maybe that will help us in the race. It could be fun," said the Briton.

Lewis Hamilton speculated about the reason for the FIA's decision to have just one detection point.

"I would assume (if there was two detection points) everyone would probably wait, just stay behind them and not even bother overtaking on the first DRS zone and wait for the last one," he said on Thursday.

The situation finally began to come to a head late on Thursday when FIA president Jean Todt told the F1 chief executive to propose a new solution.

"It has been made clear that this fixture cannot progress and we fully respect that decision," confirmed Bahrain's circuit boss Zayed R Alzayani.

Citing the logistical issues rather than any moral ones, he said the Kingdom has "no desire" to "detract from the enjoyment of F1" by creating an arduous calendar.

"We want our role in formula one to continue to be as positive and constructive as it has always been, therefore, in the best interest of the sport, we will not pursue the rescheduling of a race this season."

"We cannot do whatever we want because there are issues like this and we need to be a bit more cautious," said the Renault team boss.

Bahrain is now counting down to its 2012 season opener date, but Boullier is not sure that will happen either.

"I think the question is just about the safety," agreed Russian driver Vitaly Petrov. "If it's still dangerous I think it's better not to go."

Sebastian Vettel, who has won the last three grands prix on the trot and also two of the other three races so far in 2011, admitted to Sport Bild on Thursday that the Circuit Gilles Villeneuve is "not our track".

"This will be one of our most difficult weekends," he said.

McLaren is usually strong in Montreal and Red Bull also bungled the strategy a year ago.

"I think we have learned our lesson," said German Vettel, but his teammate Mark Webber is also concerned the RB7 might not get a chance to shine so brightly this weekend.

"There are only slow corners, many straight lines, and we drive with less downforce than usual," said the Australian, explaining why Red Bull could be weaker in Canada.

"The straights are not ideal for us, but there are also places where we will be good," predicted Webber.

Ferrari's Fernando Alonso says it is too early for the Italian team to think about beating Red Bull on merit, but he is watching the weather forecasts for this weekend with close interest.

"I would have no problem with rain," said the Spaniard. "Anything that deviates from the norm can only improve our situation."

Vettel admits Schumacher record 'possible' in 2011
(GMM) The unique Montreal layout might weaken his dominance for a weekend, but the general view in the F1 paddock is that Sebastian Vettel is on a stroll to back-to-back titles.

Indeed, Germany's Auto Motor und Sport thinks the 23-year-old could even trouble Michael Schumacher's record for the most number of wins in a single season.

The record dates back to 2004, when Schumacher utterly dominated by winning 13 of the 18 races on the calendar — 72 per cent. If Vettel wins 8 of the remaining 13 races this year, his winning percentage will be 73 per cent.

Can he do it? "Nothing is impossible," said the young German.

"It is certainly not impossible," agrees record-holder and Vettel's friend Schumacher, "but I don't think Sebastian is bothered with statistics, only the end result."

Added Vettel: "If you look at Michael's records, some of them will be very hard to break. I'm not thinking about it. Each race is very tight, there are too many variables and it's too far away."

Schumacher's 2004 teammate Rubens Barrichello, however, would not bet against the feat.

"There is no limit. Everything is achievable," said the Brazilian.

Added Nick Heidfeld: "I think the dominance of Ferrari at that time was quite special. For Red Bull it's a bit more track-dependant and we could perhaps see that for example here (in Canada).

"I do think he could do it, but McLaren in particular is a tough opponent," said Heidfeld. "If you look at the past few years, they have caught up by the end of the season."

McLaren's Jenson Button said the record is "possible" for Vettel in 2011, "but hopefully it's not realistic".

"Our goal is to make sure that doesn't happen," added the Briton.

"Red Bull's qualifying pace is outstanding but their race pace is not as strong as they would like. On tracks where you can overtake, like here where there is always a good race, we can beat them."

As well as making his controversial "because I'm black" comments after the famous street race, McLaren's Hamilton also labeled Maldonado and Massa "ridiculous" and "stupid" in the wake of his in-race crashes.

"I talked to him. He called and apologized," Venezuelan Maldonado is quoted by the Spanish news agency EFE in Canada.

"It's a racing thing and it's over. I think I paid the consequences of a bad weekend he had, but hopefully it won't happen again," added the Williams rookie.

Maldonado, who said the lost points in Monaco were "very important" to the British team, praised Hamilton's "gentlemanly" act of contrition and confirmed he has "behaved very well" since the outburst.

Brazilian Massa, Hamilton's championship rival of 2008, was not quite as forgiving but he also confirmed Hamilton telephoned to apologize.

"Everything I said about Lewis after the Monaco race is what I felt," said the Ferrari driver, who had called on the FIA to impose race bans.

"Then he called me and he said sorry and the most important thing is that he understood what he did on track. So, this is fine and the matter is closed," added Massa.

Report – Turkey GP not dead yet
(GMM) A glimmer of hope has emerged about the future of the Turkish grand prix.

FIA president Jean Todt insists that there will be 20 races next year rather than the 21 listed on the provisional calendar.

That calendar features only one event marked by an asterisk and it is Istanbul Park, whose officials have refused to meet Bernie Ecclestone's demands for a much higher annual sanctioning fee for 2012 and beyond.

But Turkish journalist Erbatur Ergenekon insists all is not lost, telling O Estado de S.Paulo in Canada that Ecclestone is waiting for the general election this weekend in order to "probably" negotiate with Turkey's new leaders.

And the F1 chief executive, whose companies are linked with the management of the venue, has already been negotiating with the current Istanbul bureaucracy, Ergenekon reports.

"They (Turkey) have offered to let Ecclestone keep the money collected from the ticket offices," he said, referring to the fact that race promoters usually are allowed to keep the proceeds of spectator ticket sales.

Mercedes keeps working with eye on 2012
(GMM) The signs are growing stronger that Mercedes are turning their winning ambitions towards the 2012 season.

Although the German squad has not given up on the current W02 car, team boss Ross Brawn said recently Michael Schumacher and Nico Rosberg will need to wait until next season to have truly "excellent" machinery in their hands.

Rosberg confirmed to Auto Motor und Sport that the car's problems are fundamental.

"It will be difficult to be on top this year," the German is quoted by Auto Motor und Sport. "Our aim must therefore be to get closer."

Schumacher added: "We're working on it, and everything that we put in now could be very important for next year.

"We are losing time with the problems we have while the others make progress. So we have to solve it this year or we will drag them (the problems) into next season."

It is not an abundant quality in the F1 world, but the seven time world champion is calling on those critical to be patient.

"We are in the process of building something new. I am sure that Ross and I know how things are built internally and the approach of this team is in the right direction," said 42-year-old Schumacher.

"It takes time. Red Bull needed four or five years. With Ferrari that period lasted for five years. We can not play with some magic and do it in half a year."

Red Bull 'happy' to keep Webber in 2012 – Horner
(GMM) Christian Horner has hinted strongly that Mark Webber will stay with Red Bull in 2012.

Dr Helmut Marko, the energy drink company's motor racing manager, stirred the nest this week when he said that if the Australian leaves the team at the end of the season, Red Bull is likely to promote a Toro Rosso driver.

But Horner, the Milton Keynes based team's British principal, told reporters in Canada that 34-year-old Webber wants to stay in 2012, and Red Bull Racing feels the same way about him.

"Mark has made it clear that he wants to drive next year, and conversations with Mark tend to be quite straightforward," said Horner.

Horner revealed that the conversations will take place later this year, and will involve gauging if Webber still has the right "motivation and desire".

"We believe he does and we're happy to continue," he is quoted as saying by the BBC.

While teammate Sebastian Vettel has roared to a position of dominance so far in 2011, Webber admitted this week that he is struggling with the Pirelli tires.

"He has had these issues with the tires that he is working hard to get on top of," confirmed Horner, "but we are very happy with him in the team."

"The problem is that no one wants to go up against Vettel," said the newspaper. "He is just too good."