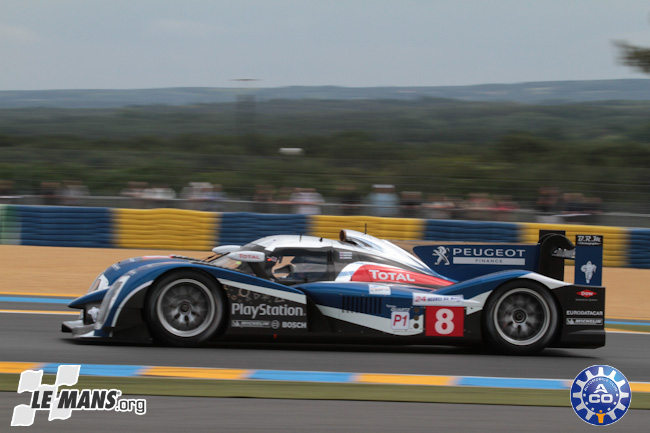 The six hours of track time scheduled for this Wednesday provided confirmation that this 79th edition of the 24 Hours of Le Mans will be very hotly disputed. With six cars separated by 1.1 seconds, free practice set the tone for this year’s 24 Hours of Le Mans, which looks set to be very close.

With around half an hour of the session remaining, Stéphane Sarrazin grabbed provisional pole position with a lap of 3’27’’033. Nobody could get close the time of the French driver this evening. The three time Polesitter at Le Mans is now in with a great chance of claiming a fifth consecutive pole position for Peugeot. With two two-hour sessions scheduled for tomorrow evening, however, the final positions are far from decided.

LM P1. After a favorable start in free practice, Audi continued its domination. But the qualifying session was marred by numerous off – track excursions and the crash of the #1 Audi with Aston Gulf AMR, #60, forcing the race director to deploy the red flag. A fright for Romain Dumas and end of the qualification in Audi R18, #1. Leading the standings for a long while, Audi finally conceded in the last half-hour after a blistering lap by Stéphane Sarrazin.

LM P2. The qualifying session was finally stopped permanently before midnight because of the very big accident of the car # 42 of Strakka Racing. The proto HPD ARX was completely destroyed. But in the end, it set the best performance of the night, beating the two Oreca-Nissan prototypes. The battle promises to be very intense in this category.

LM GTE Pro. Tough battle between BMW and the official Ferrari 458 GTC crew composed by Fisichella / Bruni / Vilander. But it was Joey Hand and his BMW M3 GT that had the last word in front of Ferrari.

LM GTE Am Porsche 911 RSR (997) Belloc / Bourret / Gibon (Larbre Competition) managed to set the fastest lap of the class, after the accident at the Gulf Aston Martin at Mulsanne. Nevertheless, the #60 Aston is credited with the second best time established earlier.

Audi Sport Team Joest used the first practice day primarily to prepare for the race. All three cars were pursuing different programs on the track. One R18 TDI was equipped with additional sensors to measure tire temperatures among other things. On another car the balance for the aerodynamics version planned for use in wet conditions was tested. The third team was mainly working on the suspension set-up.

To make optimal use of the six available hours Audi Sport Team Joest chose not to intervene in the battle for the pole position in the final phase of qualifying. Only Mike Rockenfeller (Audi R18 TDI #1), André Lotterer (#2) and Allan McNish (#3) each received a set of fresh Michelin tires at the beginning of qualifying on which they moved to the front of the field. They were bumped to positions two, three and four by the best Peugeot only half an hour before the end.

At 22:23 Audi Sport Team Joest suffered a set-back when Romain Dumas in the Audi R18 TDI designated as car number "1" hit a GT vehicle that was standing on the track in the Mulsanne corner head on. "I saw neither yellow flags nor warning lights," reported Dumas, who was not injured in the accident. The safety concept of the new LMP1 sports car proved its viability as well: damage occurred primarily to body parts. A repair before the final qualifying session will be possible without any problem, particularly since all three cars will be prepared partly anew on Thursday according to schedule and equipped with the engines intended for the race.

"Of course it was unfortunate that the accident happened, especially since it caused Timo (Bernhard), Romain (Dumas) and Mike (Rockenfeller) to lose valuable practice time," commented Head of Audi Motorsport Dr. Wolfgang Ullrich. "But we’re happy that the incident had relatively minor consequences. We collected a lot of valuable data today that will help us with our race preparation. We only sent our cars out on the track on fresh tires at the beginning and immediately afterward concentrated on our work for the race again. That the quickest five cars are within just 1.8 seconds of each other confirms how close the competition is at Le Mans this year."

BMW’s two BMW M3 GTs opened the German marque’s push for a victory at the 24 Hours of Le Mans with the best time in the GTE Pro class Wednesday in the week’s first qualifying session. Andy Priaulx turned a lap of 3:58.426 in the BMW that he will share with Joey Hand and Dirk MÃ¼ller – teammates for BMW Team RLL in the American Le Mans Series presented by Tequila PatrÂ¢n.

The three were class winners at the 59th Mobil 1 Twelve Hours of Sebring presented by Fresh from Florida in March and seem intent on winning sports car racing’s crowned jewel. A pair of two-hour qualifying sessions is on the slate for Thursday beginning at 7 p.m. French time (1 p.m. ET).

Priaulx was a half-second quicker than AF Corse’s Ferrari F458 Italia of Toni Vilander, Giancarlo Fisichella and Sebring class pole-winner Gimmi Bruni. The second BMW of Augusto Farfus, Jorg MÃ¼ller and Dirk Werner sat third with all three cars within a second of each other.

Corvette Racing’s two Corvette C6.Rs were fourth and fifth in class Wednesday. The car of Jan Magnussen, Oliver Gavin and Richard Westbrook was the quickest of the two at 3:59.519 – a little more than 0.1 seconds better than the sister car.

Spencer Pumpelly set the fastest time for Flying Lizard Motorsports in the GTE Am class. The Le Mans rookie turned a lap of 4:04.747 in the Porsche 911 GT3 RSR that he will drive with Darren Law and Seth Neiman. Pumpelly was only 0.8 seconds off the provisional pole time of Larbre Competition’s Porsche.

Krohn Racing, GTE Am winner at Sebring with its Ferrari F430 GT, was fifth in class Wednesday at 4:05.856. Tracy Krohn, Nic Jonsson and Michele Rugolo are driving at Le Mans – just as they did at Sebring.

The grid positions will be decided in two additional qualifying sessions on Thursday night.