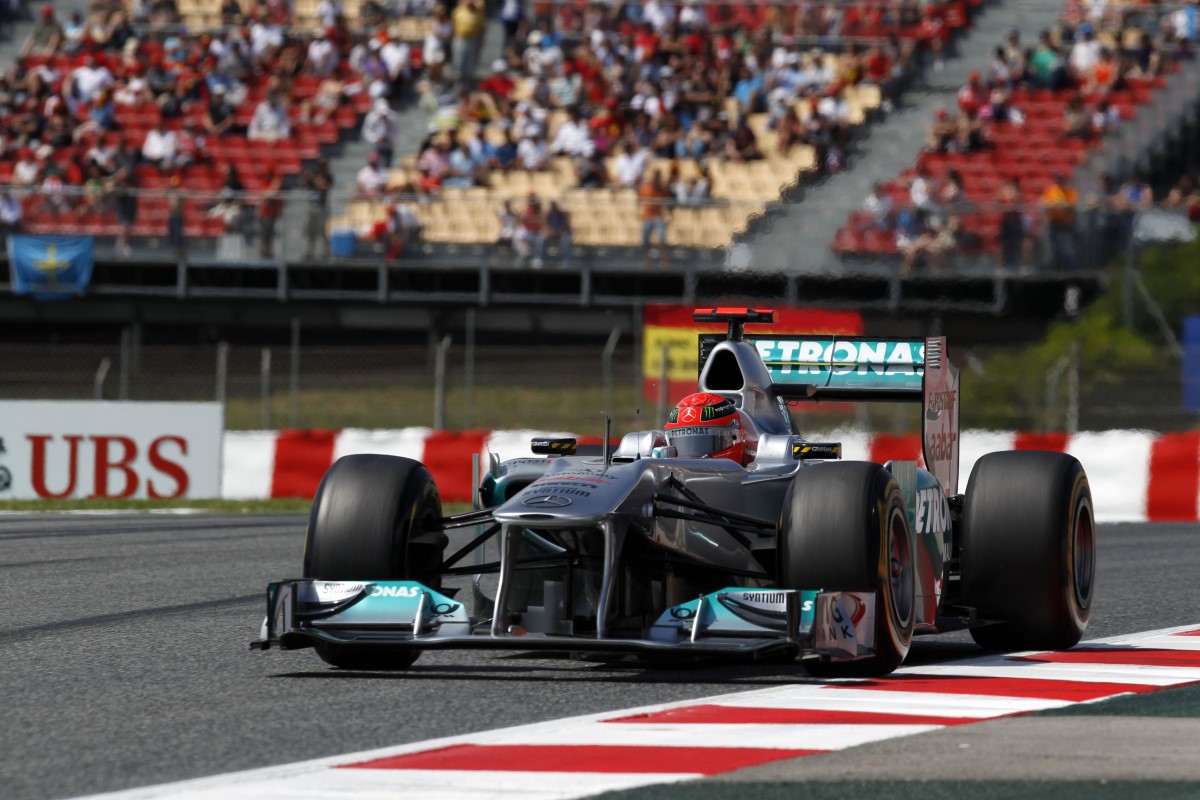 Buemi not commenting after hitting man with F1 car
(GMM) Sebastien Buemi has emerged from a terrifying incident during a formula one demonstration drive in Japan.

The Swiss driver was at the wheel of a recent Red Bull single seater in Chiba, Japan, when a member of the event's staff ran in front of him.

22-year-old Buemi, who had just performed some donuts at the event to raise money for earthquake victims, headed off for another demonstration run when the Japanese marshal ran down a steep embankment at the side of the road.

Realizing he was about to be struck, the man – wearing a shirt marked 'staff' and carrying a clipboard – jumped over the front wing and also cleared the cockpit but was struck by the rear of Buemi's car at about 50kph.

He was shaken but basically unhurt and walking immediately afterwards, while the Toro Rosso driver also escaped injury.

"I can't say anything about it until Red Bull has clarified the matter," Buemi told the Swiss newspaper Blick in Tokyo.

Sauber 'very optimistic' Perez to race in Canada
(GMM) Peter Sauber on Sunday said he is "very optimistic" Sergio Perez will be in action this weekend in Canada.

The Mexican rookie spent two nights in a Monaco hospital with concussion and a bruised thigh after his high speed qualifying crash.

He must be cleared by FIA doctors before getting the green light to race this weekend.

But team boss Sauber wrote in the Swiss Sonntagsblick newspaper that, after the 21-year-old's hospital stay and some further rest days in the Principality, Perez was at the weekend examined in a specialty clinic in Zurich.

"The results were positive, so we are very optimistic that he will be at the start in Canada," he said.

Sauber revealed that the FIA doctors will examine Perez on the Thursday before the Canadian grand prix in Montreal.

That is the finding of the German newspaper Bild am Sonntag, after testing the volume of this year's field trackside in Monaco just over a week ago.

The silver W02 registered 127.8 decibels, which is louder than the average human pain threshold, and nearly as loud as a military jet aircraft take-off with afterburner at 50 feet.

The quietest F1 car this year is the Cosworth-powered Virgin, at 125.9 decibels.

Bernie Ecclestone has cited the awesome sound of the current crop of F1 cars as his main objection to the proposed four-cylinder turbo rules for 2013.

The FIA last Friday acknowledged that the 2013 debut could be delayed.

"In consultation with the main stakeholders, and following the outcome of this consultation, a fax vote by the World Motor Sport Council could be considered by 30 June latest to redefine the implementation date", the governing body said after its Barcelona meeting.

Bahrain GP still in doubt after rescheduling decision
(GMM) The FIA has signaled the green light but grey clouds of uncertainty continue to hang over the 2011 Bahrain grand prix.

After the World Motor Sport Council controversially agreed to reschedule the troubled island Kingdom's race for late October, protest groups are now calling for a 'Day of Rage' to coincide with the event that in March was called off due to violence.

Britain's sports minister Hugh Robertson has told the Telegraph the grand prix will be a "disaster" if it goes ahead.

Commentators were surprised last week when the major opposition party in Bahrain supported the rescheduling of the race.

Robertson said: "You can understand why opposition groups might want the race to go ahead if they are planning protests around it and this is a danger."

Bahrain Centre for Human Rights president Nabeel Rajab said: "The people are very upset and already they have called the day of that racing as a Day of Rage where you come out everywhere and in every city of Bahrain to show anger towards the Bahrain government.

"We are going to use this event to expose the human rights violations in Bahrain and let the outside world know what's happening here," he said.

The F1 teams are already scheduling urgent talks, and it is likely that Ross Brawn's view that the reinstatement is "totally unacceptable" will now be echoed within the paddock.

Renault boss Eric Boullier said he will take the team to Bahrain in October "as long as our safety and the security of the people living there is guaranteed".

And certain high-profile sponsors might also boycott, according to an editorial in the Observer newspaper.

"It is time for those sponsoring the Bahrain grand prix … to step up to the mark and demonstrate that even if F1's managers are struggling to find their conscience, its paymasters are not," it read.

The Guardian's Richard Williams said the 2011 Bahrain grand prix will compare to Hitler's Olympic Games in 1936 and the Mexican massacre in 1968.

Grand Prix Drivers' Association president Rubens Barrichello is quoted in the Finnish press: "I want to be absolutely convinced that safety there (in Bahrain) is guaranteed.

"At GPDA meetings, all the drivers expressed concern and required a security guarantee to go there," he said.

Former FIA president Max Mosley is highly critical of his successor Jean Todt's role in allowing Bahrain to go ahead.

"If formula one allows itself to be used in this way in Bahrain, it will share the regime's guilt as surely as if it went out and helped brutalize unarmed protesters," he wrote in the Sunday Telegraph.

"The decision … is a mistake which will not be forgotten and, if not reversed, will eventually cost formula one dear."

Outspoken driver Mark Webber is hopeful the decision will indeed be reversed.

"I'll be highly surprised if the Bahrain grand prix goes ahead this year," the Australian wrote on his website long after the decision was taken.

The rumors emerged during the Monaco grand prix and the Enstone based team's boss Eric Boullier hinted they might have been started by his predecessor Flavio Briatore, who was making an appearance in the Principality.

In a further move to downplay the rumors, France's autohebdo.fr reports that Renault is making several new investments, including a state-of-the-art driver simulator.

The report also referred to an update for the 60 per cent wind tunnel and a new supercomputer for CFD computer simulations.

Boullier, meanwhile, has told L'Equipe that a management shakeup is the next step.

"In 2010 we watched the operations at the circuit and did not want to destabilize the team, focusing instead on operating efficiently.

"Now is the perfect time to ensure we have effective management at the track," he revealed.

"We're calm. It has been a transitional period that we have handled remarkably well. We have a sponsor in the form of Group Lotus and solid partners.

"And if in the season we ever need an extension of the budget, Genii Capital is able to grant it," insisted Boullier.

At the same time, the team's title sponsor Group Lotus has insisted the recent naming dispute battle with Team Lotus has not affected its commitment to Renault and formula one.

Proton-owned Lotus has vowed to appeal the High Court's decision to allow Team Lotus to keep using the name and logo for its entirely separate outfit.

But Dany Bahar insists: "We (Group Lotus) are even more committed than ever before to our long-term plan within the sport.

"With regards to our involvement with (Renault), as Lotus we stand united with Genii Capital and have every confidence in the future success of (the team)," he said.

"People always question the cost but, believe me, if we couldn't afford it, we wouldn't do it."

US GP could push for later 2012 date – official
(GMM) An American FIA official has questioned the scheduled date for the inaugural US grand prix in Austin.

The World Motor Sport Council announced after its Barcelona meeting last week that the Circuit of the Americas, under construction in the Texan capital, will host its first formula one race in 2012 in mid June.

For logistical reasons, the event is paired on consecutive weekends with F1's only other North American venue in Canada.

But the local American Statesman newspaper has pointed out that in 2009, for example, the temperature in Austin on 17 June was a sweltering 100 degrees (38C).

"This is the proposed date. The date won't be final until the September or December meeting," American Nick Craw, president of the FIA senate, said.

"A fall (autumn) date is, therefore, possible, which would possibly offer cooler weather," he added.

Craw said the later race date would have to be proposed by US GP promoter Tavo Hellmund as well as Bernie Ecclestone.

The Circuit of the Americas said in a statement that excavation work continues at the site, with construction "on schedule".