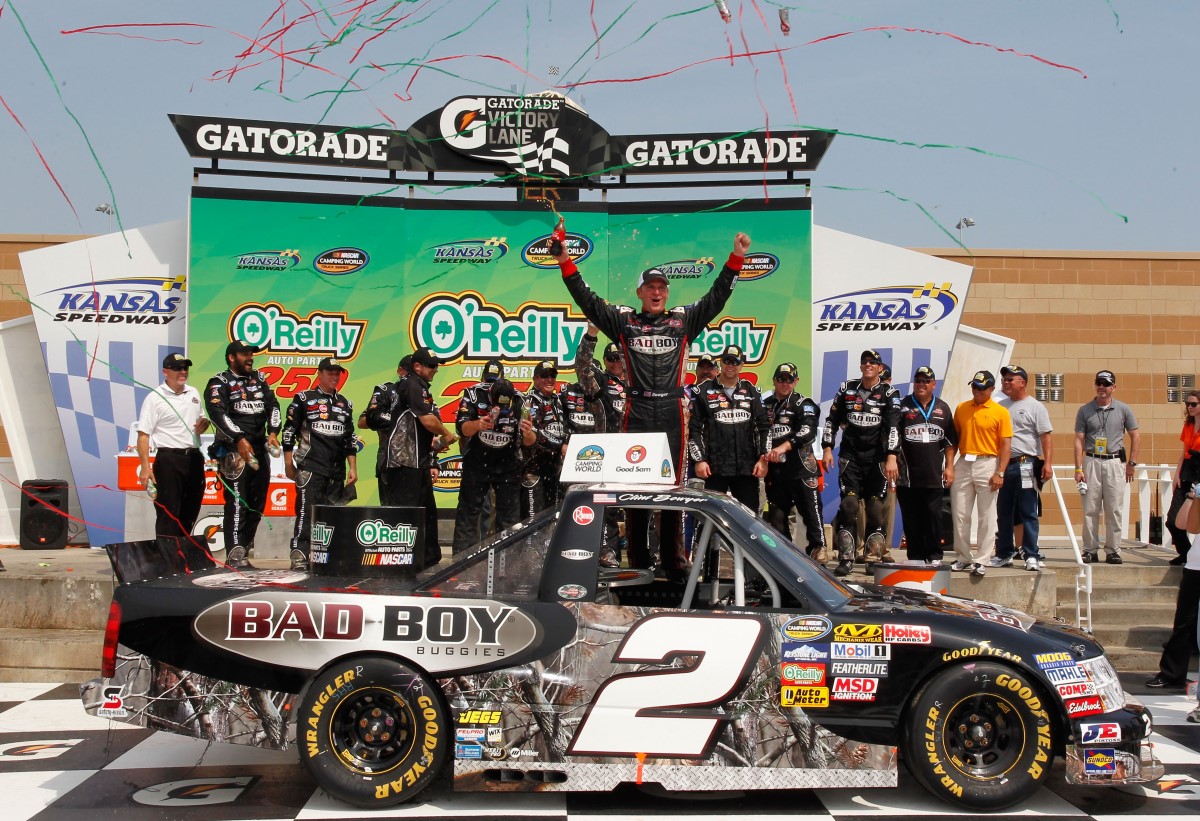 Bowyer, from Emporia, Kan., beat Johnny Sauter to the finish line by 1.695 seconds to claim his third victory in 11 starts in the series. Todd Bodine ran third, followed by James Buescher and Joey Coulter, who passed Kyle Busch on the last of 167 laps for the fifth spot.

It was a watershed race for Bowyer, who posted his first NASCAR national series victory in his home state in the 400th race in Truck Series history. Previously, Bowyer had finished second in the 2007 Sprint Cup race at the 1.5-mile track and second in the 2008 Nationwide Series event here.

“We’ve come close here," Bowyer said. “We’ve had good runs here, but we just haven’t been able to seal the deal. To finally be able to do a burnout on the frontstretch in front of that crowd is big, man. It’s a good feeling.

“This place means a lot to me. I watched this place being built. I dreamed of being able to race here in anything, and to be able to roll into victory lane … is pretty cool."

Bowyer, however, has unfinished business at his home track.

A debris caution on Lap 98 was a godsend for Bowyer and Sauter, who hadn’t been to the pit for fuel and tires since Laps 50 and 59 respectively. Both took advantage of the yellow and came to the pits.

After restarting third on lap 103, Bowyer took the lead from Todd Bodine on Lap 109, two laps before Shane Sieg smacked the Turn 2 wall to cause the sixth caution of the race. Bowyer returned to the pits under yellow on Lap 112 to take on enough fuel to go the distance.

Though he restarted 11th on Lap 116, Bowyer quickly moved to the front, passing Bodine to regain the lead on Lap 122. Bowyer, Sauter and Busch all remained on the track under caution for Clay Rogers’ spin off Turn 2 on Lap 131.

Bowyer led the field to the green flag on Lap 138 and after battling Sauter for half a lap began to pull away.

Notes: Bowyer led 124 laps, including the first 49 … Sauter took over the series lead from Cole Whitt, who fell to second and trails Sauter by 12 points … Polesitter Austin Dillon, who finished 12th Saturday, gained one spot to third in the standings.