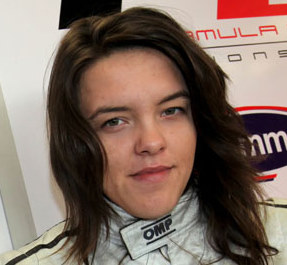 21-year-old Polish driver Natalia Kowalska is the latest driver to be confirmed for F2 in 2011, where she aims to build upon a promising first season in which she frequently demonstrated fine race craft.

Following a year on the sidelines in 2009, Natalia immediately made an impression in the opening rounds at Silverstone in 2010, making up a total of 11 places over the two races. This was followed by an 11th place finish on the streets of Marrakech, narrowly missing out on the points.

Natalia’s most successful weekend came in the Portuguese sun at PortimÃ£o, where she qualified 13th and 12th, her best performance so far. In race one she overtook eventual champion Dean Stoneman to finish 10th and claim her first points in the series. Inspired by this success, she went one better in the second race to finish 9th.

The form continued on to Brands Hatch, where 14th and 15th places in qualifying were followed by another challenge for points. Performances in Brno and Valencia provided further solid finishes, raising expectations for 2011.

“It's great to be able to return to the series", said Natalia. We scored a few points last season, which was the goal. Definitely being consistent and competitive at every track helps and I want to make sure I'll be happy with what we have done at every race weekend as a team, and myself on the track as the driver. If that will happen, I'm sure we will be able to deliver some nice looking results. Obviously it would be awesome to be the first female to be on the podium in F2."

Having missed winter testing in December due to a hand injury, Natalia is confident this won’t affect her preparations. “It’s a shame we had to miss all the winter testing because of my hand injury and eventual surgery. So we are devoting the pre-season testing to making sure that the hand is fit and fully recovered for the first race, because that is what counts.

“It is difficult to say who will be our main competition since it really looks impressive with the list of all the returning guys. Obviously the returnees would be a tough competition, and British drivers will probably be tough to beat on their home soil at Silverstone, however I'll make sure I'm going to give them all a hard time."

F2 Series Director Jonathan Palmer said: "Natalia really established herself as an impressive racer in her first season of F2 and it was great to see her efforts rewarded with points in Portugal. I’m sure she will build upon her first season’s experience in 2011 and be targeting top ten finishes from the outset."