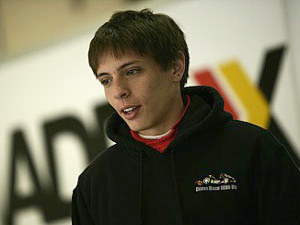 American rising star Gabby Chaves has taken another step towards a career in Formula One, announcing he will join the Addax Team in the upcoming 2011 GP3 Series. As part of the highly-rated driver development series, the reigning Italian Formula 3 Championship Rookie of the Year will race at every European Grand Prix track bar one this season, showcasing his speed and skill in front of all the F1 squads.

Since first getting the wheel of a kart, Chaves has had one dream…to one day become the next U.S.A racer to compete at the upper echelon of motorsports…Formula One. With that in mind, the teenager from Florida has signed with the Addax Team to race in the GP3 Series. Chaves, building on a highly-successful inaugural European race campaign – winning Italia F3 Rookie of the Year award – joins the renowned junior formula car squad having already impressed in both private and official series testing. In joining Addax, the former Formula BMW Americas champion plans to advance up to the GP2 Series ranks with the highly-regarded team and follow in the footsteps of former Addax racers Sergio Perez, Vitaly Petrov and Lucas Degrassi into Formula One.

“I’m excited to be joining the Addax Team in the 2011 GP3 Series," stated Chaves. “The squad believes I have the talent to challenge for the series title, and I believe they have the tools for me to achieve these goals. We have gelled quickly and are getting better every time I go on track. Ultimately my goal is to make it to F1, and Addax has shown it has the tools to do just that. I can’t wait for the season to start in Turkey."

Chaves and the Addax Team will continue preparations for the 2011 season next week (March 29-31) with an official three-day GP3 Series test at the Silverstone Circuit in England. Chaves enters the upcoming test having previously finished third in the opening day of official testing in France with the Addax Team. The season commences on May 7-8, with Rounds One and Two at the Istanbul Park facility in Turkey as part of the Turkish Grand Prix.