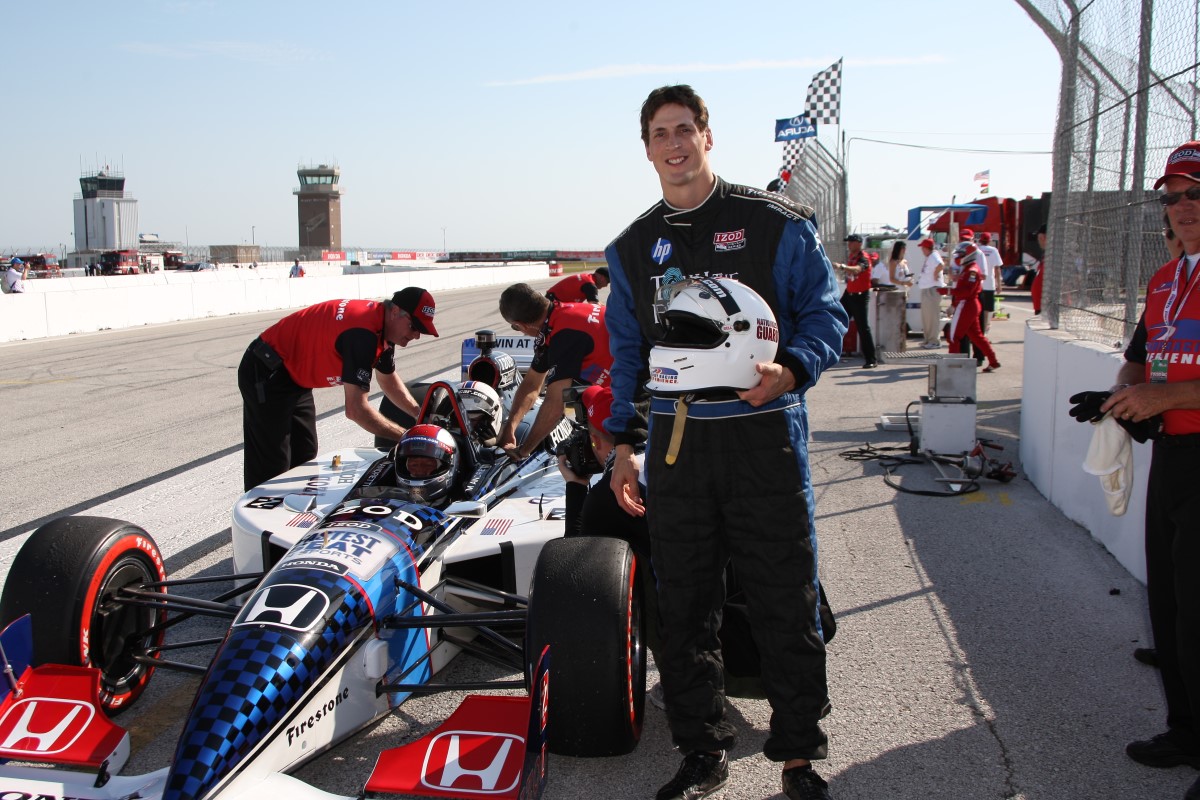 Vinny LeCavalier may be used to the coolest game on earth, but he says riding in the Indy Racing Experience two-seater may be scarier.

LeCavalier, the captain of the NHL's Tampa Bay Lightning and grand marshal of the Honda Grand Prix of St. Petersburg, took a hot lap with racing legend Mario Andretti prior to Sunday's race.

"I've driven some cars before, but that's definitely a different ballgame," said LeCavalier, who also traded a Lightning jersey for one of Alex Tagliani's racing suits. "I couldn't believe how fast it was, especially since I wasn't driving and I didn't know where we were going. It was a great experience."

Lecavalier said racing is "way scarier than anything the NHL," but something he enjoys.

"It's just another world," he said. "It was great experience and a lot of fun. Mario Andretti is driving you. How great is that. I took some videos and I took some pictures. It was just very exciting."

Damage to the No. 19 Boy Scouts of America car for Dale Coyne Racing from an on-track incident in the morning warm-up session knocked Sebastian Bourdais off the starting grid for the season-opening Honda Grand Prix of St. Petersburg.

The four-time Champ Car title-holder, who led the first race lap on the 1.8-mile, 14-turn street circuit in 2003, brought out a full-course caution when the No. 19 car clipped the inside wall of Turn 11 and made heavy contact with the wall in Turn 13.

Simultaneously, teammate James Jakes in the No. 18 Acorn Stairlifts car, stopped on the course in Turn 4 after the right-rear tire made contact with the wall. The crew swapped out parts to repair the car and he started 21st in the 100-lap race.

Tom Vossman reached one goal in traveling 2,800 miles on his bike – raising awareness and funds for the Racing for Cancer charity he founded. The long-term goal is to eradicate cancer.

"My legs are fine I don't know if I can say this but my rear end needs some damage control," said Vossman, who accepted a check for $28,000 from the IZOD IndyCar Series. "It's was a really inspirational ride. When I met so many folks with cancer along the way, it kind of gives you the energy to keep going because you know you're doing it for a good cause."

Vossman's bike was purchased by Michael Fux, founder of the Michael Fux Foundation, for $10,000. It will be donated to the Miami Children's Hospital Family Center.

"The roads we took were different so we ended up staying at hotels that we didn't plan on, and every time we stayed at a hotel that we hadn't planned usually within hours we would meet someone who had lost their father," Vossman continued. "In one case, I met a woman who had just lost her 4-year-old son about two years ago to brain cancer. So it was those moments when I realized that the more we could spread the (better)."

The ride started in Long Beach to honor Ryan Hunter-Reay, who dedicated his race victory there last April in memory of his mother Lydia, who died in November 2009 from the effects of cancer. Read Vossman's blog from the road at http://racingforcancer.org/category/blog/

In fact, he hugged Andretti after climbing from the "Fastest Seat in Sports" two-seater.

"I loved it. We were going so fast and then you slowed down to make the turns, it was unbelievable," said Dunn, a three-time Pro Bowl selection who also has received the Walter Payton Man of the Year Award (2004) for his off-field conduct and philanthropy and the Bart Starr Man of the Year Award (2008) that is given to a player who best exemplifies outstanding character and leadership.