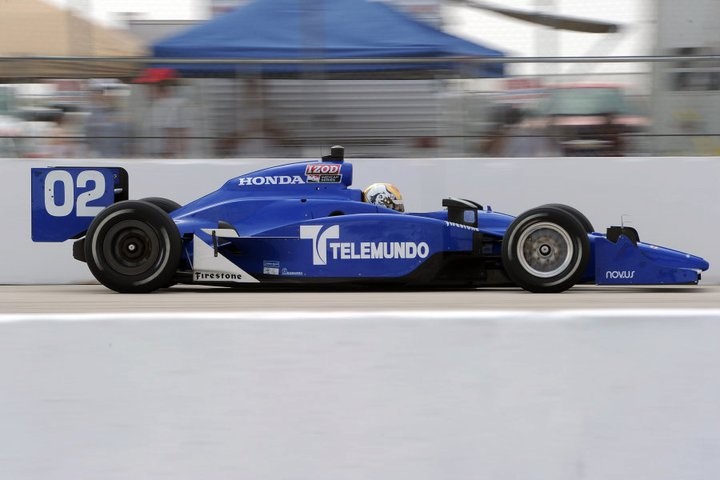 UPDATE #2 Added photo of Servia's new livery below. Also, we hear all the races will be broadcast live on Telemundo. On the surface one would think that Versus would have a problem with that but since Comcast owns both Telemundo and Versus, the deal can happen.

03/26/11 Newman/Haas Racing (NHR) announced today that the Telemundo Communications Group, a leading producer of high quality content for Hispanics in the U.S. and audiences around the world, has developed a marketing collaboration with the team’s No. 02 car entry with driver Oriol Servia for the 2011 IZOD INDYCAR Series season. The partnership reunites Servia with NHR, one of the most successful teams in the history of open-wheel racing and links them with Telemundo, a division of NBC Universal.

“Our clients are always asking us for new opportunities to reach the Hispanic consumer. Now Telemundo Station Group can offer a new and unique branding opportunity in a sport that has international appeal just like our soccer and boxing properties," said Jose Jimenez, Account Manager of Telemundo National Sales Office, Miami.

Servia, a native of Catalonia, Spain, has made 15 starts for NHR, which include his first Indy car win (Montreal 2005) and pole (Surfers Paradise, Australia 2005) as well as a total of seven top-three, 11 top-five and 13 top-10 finishes. In 2005, Servia replaced NHR driver Bruno Junqueira, who suffered a season-ending injury at the Indy 500 on May 29, and then went on to finish second to teammate Sebastien Bourdais in the point standings after 11 events with the team. Servia returned to NHR in 2009 for four races with a season-best finish of fourth at Twin Ring Motegi.

“I am very happy to be back in the INDYCAR Series with Newman/Haas Racing, which has always been my best recipe for success, and to represent Telemundo and their partners," said driver Oriol Servia. “We have been working really hard to put a program together with Telemundo and have had a genuine connection with them since the beginning. The U.S. Hispanic population is not only an important segment overall, but it is also an important fan base for our sport. The team and I are really eager for success and will do whatever it takes to get where we want to be which is the top of the podium."

“We are very pleased to have Oriol Servia back and excited about what is a ground-breaking program with media giant Telemundo," said Carl Haas, founder and owner of Newman/Haas Racing. “Together we can expand the reach and excitement of the IZOD INDYCAR Series."

“This sponsorship is precedent-setting in that it pairs one of the iconic names in motorsport, Newman/Haas Racing, with Telemundo, one of the world’s fastest growing media properties to expose the excitement of Indy Car racing to the Hispanic marketplace like never before," said Chris Lencheski, President and CEO of Phoenicia Sport and Entertainment. “For years brands have been looking for a consistent platform in racing to activate with the Hispanic marketplace, and by securing a telegenic and successful driver in Oriol Servia, Telemundo has found that platform. There is now an opportunity for a host of brands who have never embraced racing to gain exposure to millions of fans around the world through a very unique relationship."

Richard Adubato, CEO & Co-Founder of Dyno Marketing added, “Dyno Marketing and TrinidadScot have been working in partnership for well over a year to develop a national, integrated multi-media sports platform with Telemundo and impreMedia, two of the most powerful names in Hispanic media. We are thrilled that Newman/Haas Racing has engaged with Phoenicia Sports & Entertainment and us to bring such an exciting world-class sport and their sponsors to the most rapidly growing demographic in the country. This is a perfect match."

The 2011 IZOD INDYCAR Series (IICS) season-opening Honda Grand Prix of St. Petersburg will take place March 27. NHR took their first IICS victory, and 106th overall, in the event in 2008 with Graham Rahal behind the wheel.

03/26/11 It will be announced today by Newman/Haas Racing that nationwide Spanish TV network Telemundo will sponsor Oriol Servia in IndyCar this year. The deal is said to be a large marketing and promotion deal and include its own racing show based around the team. It is expected that this show may draw more viewers than IndyCar's Versus TV broadcasts. More to follow from the team today.