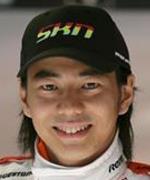 Marussia Virgin Racing is pleased to announce that Sakon Yamamoto will be the team’s Reserve Driver at the opening Formula One Grand Prix in Melbourne this week and for the next two rounds of the FIA Formula One World Championship in Malaysia and China.

The 28 year old Japanese driver has competed in a total of 21 Formula One Grands Prix since the 2006 season. His most recent F1 team experience was gained with Hispania Racing where, as Test Driver, he substituted for the team’s regular drivers Bruno Senna and Karun Chandhok at several of the races last season.

Sakon began his career in Formula One in 2005 with Jordan GP, and brings a great deal of experience after having gone on to hold the position of Test and Race driver with Super Aguri F1 Team in 2006 and 2007 and as Development Driver with the Renault F1 Team in 2008.

“We are delighted to welcome Sakon Yamamoto to Marussia Virgin Racing as our Reserve Driver for the first three race weekends. Sakon will spend the weekends observing the race drivers and attending all engineering meetings to ensure he is up to speed should there be an occasion where a last minute substitution is required. In keeping with our commitment to nurturing young talent, our Reserve Driver strategy is to help a number of drivers gain hard to come by track time and so we will be operating a roster featuring a number of racers that we are interested in evaluating during the forthcoming season."

“I am pleased to work with Marussia Virgin Racing in Australia. I really appreciate them giving me a chance to be here. The team has made a big step forward this year and I believe that I can contribute to their car development through my experience. As everyone is aware it is a very difficult time in Japan right now and any good news is much welcomed. I hope the people back home will feel positive about my latest F1 role as I would like to do everything possible to help them."