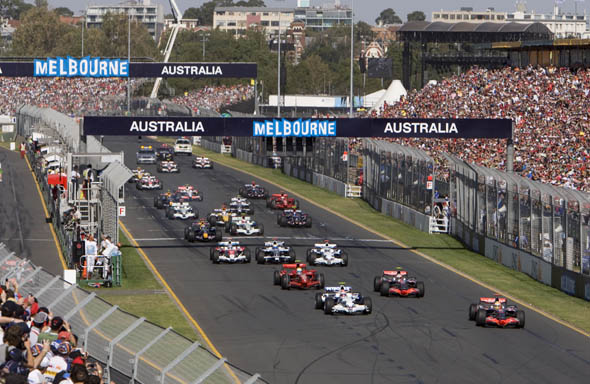 The event has another problem: Formula One is a dud spectator sport. The first GP I attended was in Adelaide in 1986. I planned to watch it as I would watch any sporting event: first-hand, up close. So I stood near the track. First, I was deafened; then I realized I had no idea whose cars were roaring past, nor who was leading or losing. Races can only be understood with help from a screen. Competitors' faces are hidden under helmets; drivers might be monkeys.

It's a shame Julia Gillard's carbon tax isn't already in place. Another formula one grand prix is imminent. Revenue from those jumbo-loads of equipment, plus all that burning rubber and fuel could wipe out the national debt.

Still, it is possible to embrace the Albert Park event as a useful source of energy thanks to the hot air it generates. Australia's Mark Webber drives a car sponsored by a sugary drink, but that isn't the only bull (red or otherwise) at this circus.

Organizers of, and apologists for, the event – now in its 16th year, since being pinched from Adelaide – face an awkward double-whammy: fewer people are interested in it, yet it costs all Victorians more and more – $50 million last year, around $130 million over the past three. Imagine what our schools or hospitals or public transport could do with that money.

Other annual sporting events in Melbourne, such as the Spring Racing Carnival and Australian Open, haven't experienced similar trends. But still we hear, most recently after lord mayor Robert Doyle pooh-poohed the prix, about the GP having "significant economic benefits"; $180 million worth, in fact.

Some years ago, I tried to verify this so-called economic benefit. Those who know their numbers said that studies arriving at such a figure are often like a Sir Humphrey Appleby inquiry – you don't set one up unless you know what the answers will be. The massive assumption behind the ''benefit'' is that anyone in town over the next week or so – eating out, staying in a hotel, buying a souvenir T-shirt – is here for the race. This could be news for participants in the National Careers and Employment Expo or a ''Stars of Bollywood'' event, both of which are on in Melbourne next weekend.

There is, however, a considerable economic benefit for the diminutive Mr. Big of Formula One, Bernie Ecclestone. The Melbourne event has been very good to him, and a close association with him has been good for at least one senior GP figure. The GP's annual license fee is estimated to be around $50 million; the exact amount has never been disclosed, despite the race being run on fenced-off public land. If Ecclestone were a more admirable person – a visionary philanthropist, say – it would be easier to accept the flood of money flowing his way. But he is a graduate of the Basil Fawlty school of diplomacy, as some recent comments ("We don't need Australia") made clear. And he is seldom here: the Melbourne event could be renamed Weekends Without Bernie.

The other claim wheeled out every year is that global TV coverage represents invaluable exposure for Melbourne: Oprah in overalls. Nonsense. I watched the 1996 race, the biggest of them all, from New York, where I was The Age's correspondent at the time. After finding the GP on an obscure cable-TV channel, it was fun glimpsing local landmarks. Oh look, there's the bay! But what was striking was the lack of scene-setting. Formula One fans care about circuits more than cities; they want to see prangs, not postcards.

The event has another problem: Formula One is a dud spectator sport. The first GP I attended was in Adelaide in 1986. I planned to watch it as I would watch any sporting event: first-hand, up close. So I stood near the track. First, I was deafened; then I realized I had no idea whose cars were roaring past, nor who was leading or losing. Races can only be understood with help from a screen. Competitors' faces are hidden under helmets; drivers might be monkeys.

The president of the international motor sport body, Jean Todt, recently made this same point. "It is very difficult to identify a driver," said the former Ferrari chief. He'd like to see big names and numbers on cars. But it probably won't happen. Why? Sponsors' logos take precedence.

That 1986 Adelaide race had a cracking finish. The race and the drivers' championship were decided on the last lap. None of Melbourne's GPs has been as exciting, partly because it's a street circuit not conducive to overtaking. The 2001 race was memorable, but for all the wrong reasons: Graham Beveridge, a volunteer marshal, was killed when a wheel came off a car, flew through a gap in the safety-fence and struck him. Drivers and racing teams afforded him more respect than grand prix chairman Ron Walker, who announced his death only after reporting the crowd figure.

Late in 2003, a commemorative plaque was placed on a park bench, between the track and the lake, near the spot where Beveridge died. The other day I went to see it again. Fences and barriers have been erected, making playgrounds inaccessible, but I made it to the bench. The plaque has weathered, but is still legible. The brief inscription concludes: "Memories are forever." But major events are not.

Alan Attwood is editor of The Big Issue. SMH.com.au

[Editor's Note: Another report badmouthing Australia's F1 race. Bernie Ecclestone thinks articles such as this damages F1's reputation and rumor has it he is prepared to announce that after this year's race Melbourne is history, to be replaced by Russia, India or Staten Island, NY. Watch what you wish for.]