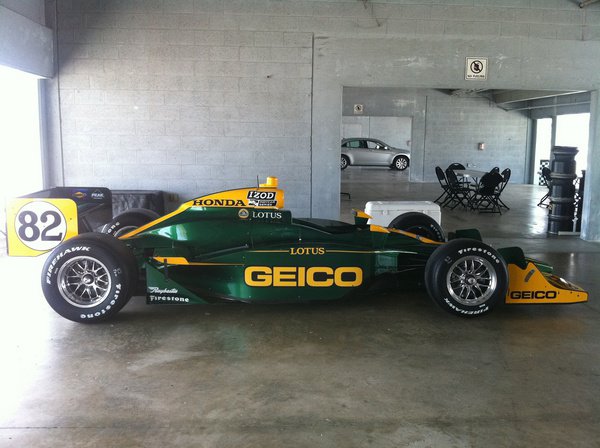 Kanaan, with primary support from GEICO, will pilot the No. 82 GEICO – KV Racing Technology – Lotus Honda/Dallara/Firestone entry. He joins Takuma Sato and E. J. Viso in a three-car effort for the team in 2011.

“I am very pleased to announce that Tony Kanaan is joining our team," said KVRT – Lotus co-owner Kevin Kalkhoven. “Tony will be an asset both on and off the track. His addition, in combination with Takuma Sato and E. J. Viso, will provide us with the opportunity to be consistently competitive. I also want to acknowledge GEICO for their support in making Tony’s addition to KVRT – Lotus possible."

KVRT – Lotus co-owner Jimmy Vasser said. “I think Tony (Kanaan) is a great addition to our team. He, along with Taku and EJ gives KVRT – Lotus a very strong driver line-up and one I am sure can compete for podium finishes and race wins. Tony’s knowledge and experience will be extremely valuable to our team. I would also like to thank GEICO for their support and KVRT – Lotus General Manager Mark Johnson for his tireless work getting all the parties together."

Ted Ward, GEICO’s Vice President of Marketing said, “We are excited at the opportunity to once again work with KV Racing Technology – Lotus in the IndyCar Series. We feel that safety is an important component of auto racing and being associated with Jimmy Vasser and Tony Kanaan will only help us to continue to spread our message. This is our first full season primary sponsorship in the IndyCar Series and we feel it will complement our current longstanding NASCAR programs and assist us in reaching a much broader fan base."

Kanaan, the 2004 IndyCar Series Champion, who completed every lap of every race in route to the championship, is known as a consistent and fearless competitor. The 36-year-old native of Brazil is entering his 14th season of major U. S. based open–wheel competition and 10th in the IndyCar Series (ran one IndyCar race in 2002). A perennial championship contender, Kanaan has made 225 career open-wheel starts earning 150 top-10 finishes including 94 top-five showings with 15 wins and 14 pole positions. His IndyCar record is even more impressive. In 132 starts, Kanaan has finished in the top-10 a remarkable 102 times, including 78 top-five performances, 14 wins and 10 poles.

Commenting on his signing with KVRT – Lotus, Kanaan said, “Jimmy (Vasser) and I started talking about joining forces at the end of last season, but the timing was not ideal and I ended up signing with Gil (de Ferran). When I became a free agent in mid-February, calling Vasser seemed like a natural thing to do since KVRT was one of the top teams still looking for a driver. Jimmy and I go back a long way, we were rivals during the CART days, but more than that, we have always been good friends, which helped a lot with our negotiations.

“I’m thrilled that we reached an agreement and from the bottom of my heart I’d like to thank KV Racing Technology – Lotus for the opportunity they have given me and especially for taking me under the circumstances I found myself in. KVRT – Lotus is one of the most successful teams that joined IndyCar from Champ Car and I can’t wait to sit in the legendary Lotus No. 82 car and start working with the crew. I’ve spent the last six months looking for sponsorship and not thinking about racing. so I missed all the pre-season testing, but I really can’t complain. With a group of guys like Vasser and his team backing me, plus the help of my new teammates, Takuma Sato and E. J. Viso, the only thing I can say is that I’m ready to do what I do best, drive a racecar and push hard to give KVRT – Lotus their first IndyCar win.

“I want to thank GEICO for their help in making it possible for me to join KVRT – Lotus. I would also like to thank all of my fans and supporters that stuck with me during this extra-long offseason and invite them to stay tuned on the 2011 IZOD IndyCar Series. I can assure you it will be a very exciting one. I can’t forget to mention that my son Leo is very thankful that I kept my car green, he was having a hard time accepting any other color."

Lotus Director of Motorsport Claudio Berro said, “We are delighted to welcome Tony Kanaan to the KVRT – Lotus team. The addition of a driver of Tony’s caliber strengthens our existing team and reiterates our commitment to IndyCar and to achieving success in the series. Tony, a former champion with multiple race wins, brings with him a wealth of experience. He will undoubtedly be a great asset to the team complementing our existing driver line-up of Takuma Sato and E.J. Viso, who also flies the flag for Lotus for the first time this year.

“We believe that we have one of the strongest driver line-ups on the grid with a great blend of experience, talent, enthusiasm and total commitment. I am convinced we have all the right ingredients in place to build upon our inaugural season and to make the necessary progress and ultimately enjoy success in the coming months and years."