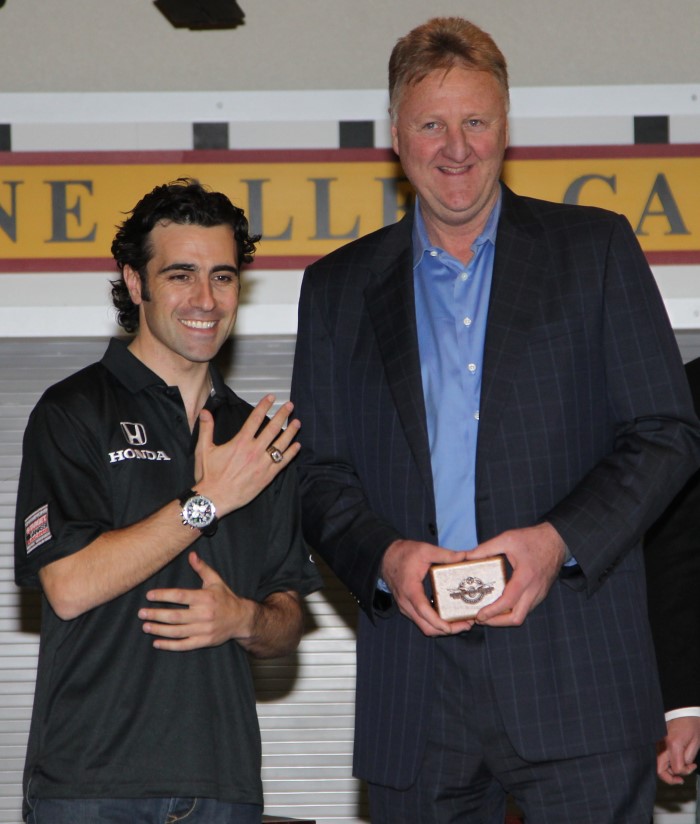 Two of the biggest sporting passions in Indiana – basketball and auto racing – blended for a special ceremony March 18 when NBA legend Larry Bird presented Dario Franchitti with his Herff Jones Champion of Champions ring as the winner of the 2010 Indianapolis 500.

Indiana native Bird made the presentation to two-time Indianapolis 500 winner Franchitti at the IMS Pavilion at Conseco Fieldhouse, home of the NBA's Indiana Pacers. Bird is the president of basketball operations for the Pacers.

The ceremony united two great champions in their respective sports.

Bird won three championships, three league Most Valuable Player awards and was a 12-time All-Star during his 13-season career with the Boston Celtics. He also led Indiana State to the NCAA championship game as a senior in 1979 and won a gold medal with the U.S. Olympic team in 1992.

"It's a real honor to meet Larry," Franchitti said. "I'm not a massive basketball fan, but it's like guys who are not big racing fans, they know who Mario Andretti is. Same thing, I know who Larry Bird is.

"This is a great honor to receive this ring. Fingers crossed this year we can try to catch up with Larry with the three rings. Three of these beautiful rings would be lovely. It's a big year for the Indianapolis Motor Speedway, for the Indianapolis 500. It's already the biggest race in the world, but being the Centennial celebration, it adds that extra spice to it."