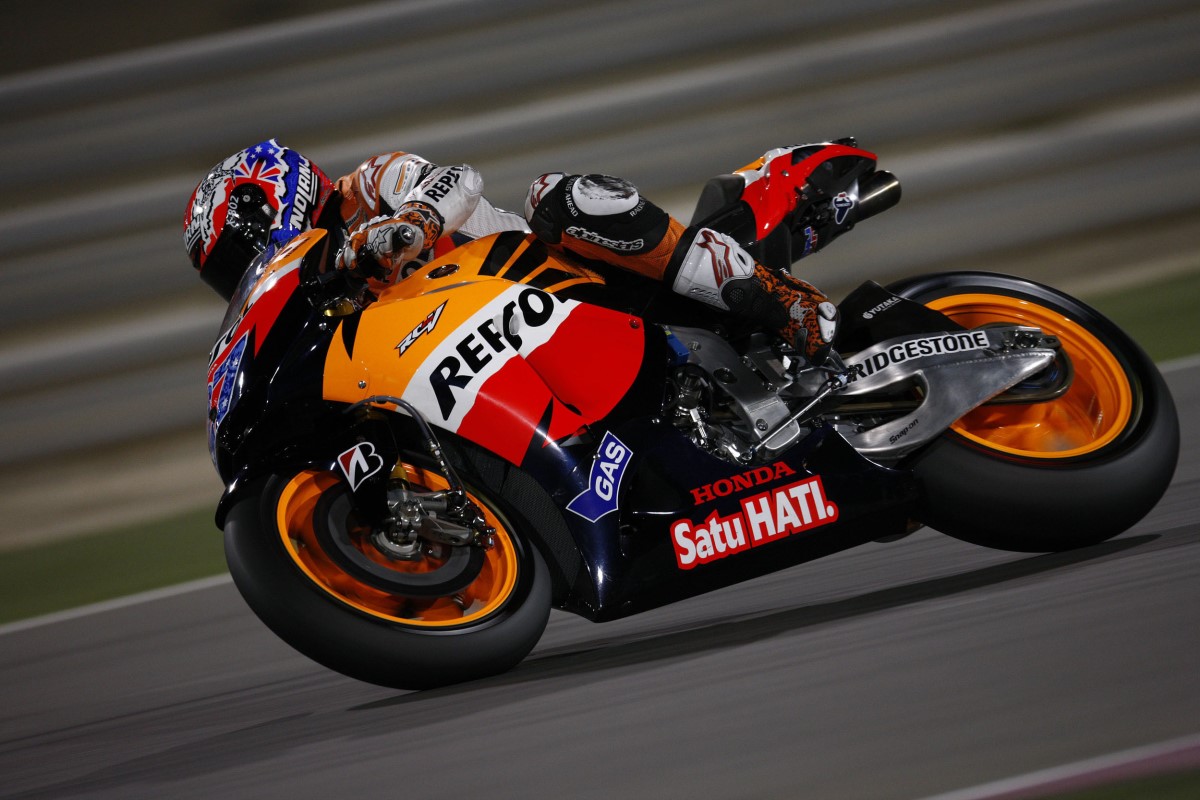 Casey Stoner and Dani Pedrosa maintained the top two spots of the timing sheets in both Free Practice sessions today in Qatar.

Stoner used both sessions tonight to better understand his bikes' performance with used tires and finished the session confident that he is able to achieve what he expects from both front and rear Bridgestones. Pedrosa also spent a lot of time working on tires for qualifying and Sunday's race. Dovizioso rectified the issue he had yesterday with vibration in the front of the bike and worked on set-up in preparation for qualifying.

CASEY STONER – 1st – 1'55.035
"We spent most of the second session tonight on used tires to get a better understanding of where we are with them, we did a quick lap on race distance with these tires so we're really happy with this – in addition we completed around thirty laps on the front tire which also worked well. We played around with the tire pressure a little, but in general they seem to be very consistent from start to end. Today we had a few more things to try, in the first session today we didn't make many improvements from yesterday and then in the second session we made a big step forward. I'm really happy at the pace we're running, the way I'm riding and how we have the bike set-up".

DANI PEDROSA – 2nd – 1'55.193
"We did a good job today, especially in the third session. We concentrated on doing a good lap at the beginning and then we were focused on the pace. I'm happy about how is everything going – even if there are still some places where we know we can do better and improve some tenths, so let's keep concentrated to do that tomorrow. For the qualifying session our target is to be on the front row; here my best position on the grid has been a sixth place and I would really like to be on front row tomorrow. This afternoon we tried both tires, hard and medium, and both worked well; my feeling is that the hard compound is better for the race distance even if the race is one hour later than practice today, and the softer compound is the best option for the qualifying session".

ANDREA DOVIZIOSO – 3rd – 1'55.740
"I’m happy with the work done during today’s two practices and of course of the third position though it’s not enough because Casey and Dani are faster so we will keep working hard to gain some tenths. Today the team did a great job to solve the vibration in the middle of the corner that we had yesterday. First we changed the front rim without any change in the set up and the vibration decreased. Then we also modified the set up of the fork, a middle step between 2010 and 2011. Doing this I had a better feeling but we also lost the good points of the 2011 fork, such as the stability in braking and corner entry. Tomorrow we will continue working on the fork set up and the target is to do a good qualifying session for a good position on the grid. The race will be a bit different, long and hard for the body. I’m confident that we can improve".