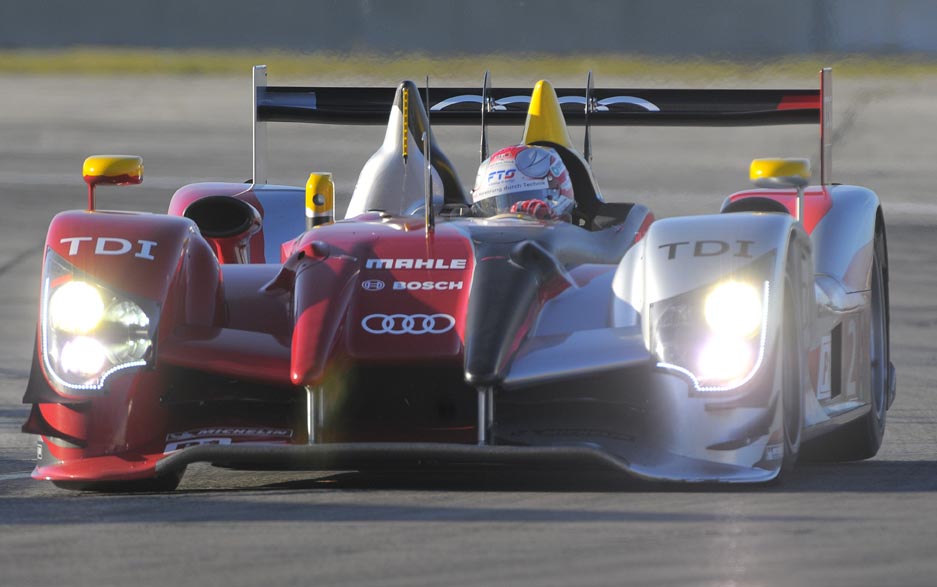 Audi Sport Team Joest continued to lead practice times for the Mobil 1 Twelve Hours of Sebring presented by Fresh from Florida, the opening round of the American Le Mans Series presented by Tequila Patron. Early in the hour-long afternoon session, Tom Kristensen entered a 1:50.424 (120.626 mph) in the No. 2 Audi R15 that he will share with Allan McNish and Dindo Capello. Romain Dumas waited until the closing minutes to click off a 1:50.538 (120.502 mph) in the sister R15, co-driven by Timo Bernhard and Mike Rockenfeller. Kristensen’s lap was only slightly off the fastest time of the day, a 1:49.254 (121.919 mph), which was set by Dumas in the morning session.

Stephane Sarrazin was quickest of the Peugeot Sport Total team in the afternoon session. The Frenchman, who shares the No. 8 Peugeot 908 with Frank Montagny and Pedro Lamy, was third fastest, turning a 1:51.055 (119.941 mph).

GT remains anyone’s game with three manufacturers separated by less than 0.5 seconds in the afternoon session. Corvette Racing’s Olivier Beretta led the class with a 2:02.751 (108.512 mph) in the Corvette C6.R he will share with Tommy Milner and Antonio Garcia. The Flying Lizard Motorsports Porsche 911 GT3 RSR driven by Patrick Long, Jorg Bergmeister and Marc Lieb was second in the order thanks to Long’s lap of 2:03.108 (108.198 mph). Risi Competizione completed the top three on the strength of Jaime Melo’s 2:03.225 (108.198 mph) in the Ferrari F458 Italia he shares with Toni Vilander and Mika Salo.

Soheil Ayari improved on Signatech Nissan’s LMP2 class-leading time from the morning session. Sharing the ORECA-Nissan with Franck Mailleux and Lucas Ordonez, Ayari turned a 1:56.693 (114.146 mph). The Level 5 Motorsports Lola-Honda of Scott Tucker, Ryan Hunter-Reay and Luis Diaz followed, as Diaz set a lap of 1:59.759 (111.223 mph). The sister Level 5 car driven by Tucker, Christophe Bouchut and Joao Barbosa completed the top three in class with a 2:01.357 (109.759 mph) by Barbosa in the closed-top prototype.

The CORE autosport duo led the LMPC field, this despite the No. 006 ORECA FLM09 exiting the session early with a suspected blown engine. Ryan Dalziel set the quickest lap for the category, a 1:57.757 (113.114 mph) in the car he will share with team owner Jon Bennett and Frankie Montecalvo. Before leaving the session via tow rope in the team’s second car co-driven by Ricardo Gonzalez and Rudy Junco, Gunnar Jeannette turned a 1:57.830 (113.044 mph). Elton Julian was third quickest in LMPC after a lap of 1:59.846 (111.143 mph) in the Genoa Racing entry he is co-driving with Eric Lux and Christian Zugel.

In addition to the red flag brought out to retrieve Jeannette’s LMPC car, a second red interrupted the afternoon session when the No. 054 Black Swan GTC Porsche driven by Sebastian Bleekemolen became stuck in the Turn 17 tires.