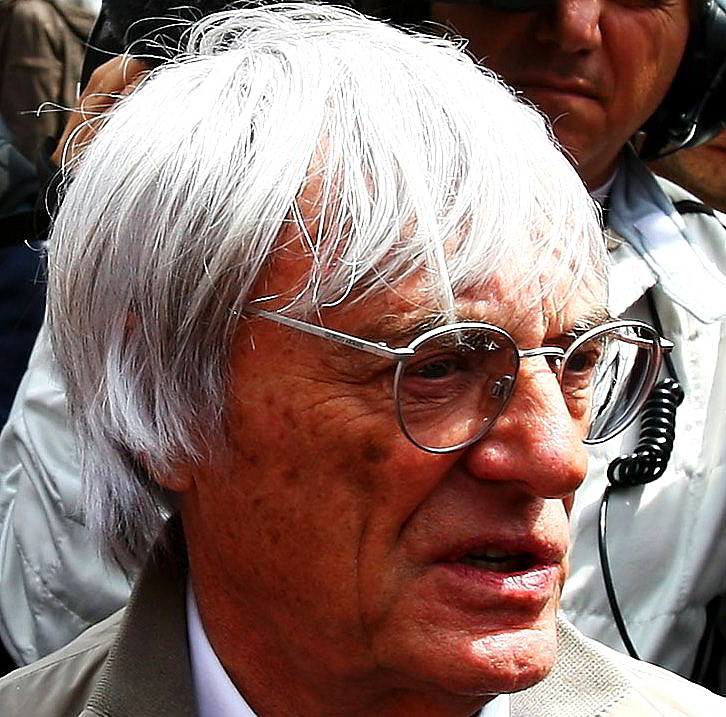 Ecclestone to be questioned in bribery probe
(GMM) German prosecutors are likely to seek an interview with Bernie Ecclestone as they investigate F1's 2006 takeover.

It is the latest development following the jailing in Munich of banker Gerhard Gribkowsky surrounding his mysterious receipt of $50 million, with German media suspecting it may have been paid by F1 chief executive Ecclestone.

British sources including Sky, the Telegraph and the Times report that Ecclestone, 80, is expected to be questioned.

The Briton, who has denied making the payment but is understood to have retained a team of German lawyers, was not available for comment.

It is also not known when the questioning will take place or whether it will be in the UK or Germany, but if it is the latter, Ecclestone is likely to seek assurances that he will not also be detained.

The Telegraph said Ecclestone has not yet been contacted but will be "happy to assist with the investigation".

F1's owner CVC, who have also denied involvement in the Gribkowsky payment, recently commissioned a separate investigation into the takeover which reportedly cleared it of wrongdoing.

The Finnish newspaper Turun Sanomat reports that the visa documentation for many of the sport's travelling personnel is late.

After the FIA's head of communications Matteo Bonciani wrote to Shanghai race organizer Juss Event this week, the reply admitted that the visa application process for 2011 "will be a little time-consuming".

"Once we get the notice from the Shanghai foreign affair office, we will immediately inform the applicants," the letter added.

The letter also said visa invitation letters have been sent to Chinese embassies and consulates "as far as I know".

Ecclestone to push for less teams in new F1 deal
(GMM) Bernie Ecclestone has continued to argue that ten teams is a better number for formula one.

The F1 chief executive was a staunch critic of the sport's three new stragglers last year, but he has since said Team Lotus is a worthy competitor.

"I'm very happy that they are back," Ecclestone told the BBC. "They will get on their feet and then sponsors will be attracted to them and we'll see them grow.

"Frank Williams was like that years ago," added the 80-year-old.

As for Virgin and HRT, however, he told Reuters late last season that "one or two of them (the new teams) shouldn't be there perhaps … it's a bit rich for their blood".

When asked how the 2011 season will be for them, he answered simply: "Difficult.

"Twelve teams is too many. Ten is enough," added Ecclestone.

A report in Spain's El Mundo Deportivo said the Briton actually wants to drop the limit for the maximum number of teams from 13 to 10 for the new 2013 Concorde agreement.

The report said Ecclestone thinks ten is a better number to financially look after the teams and ensure there are enough good sponsors to go around.

"Formula one is about competition, it's the peak of motor sport, you shouldn't be there as a spare part," he said.

Virgin has also vowed to raise its game but had the slowest 2011 car in recent testing, while HRT will only run its new car for the first time in Melbourne next Friday.

Referring to 2010, Virgin boss John Booth said: "We thought F1 was achievable the way we were doing it, and we thought it was a wonderful thing. But you soon get the wake-up call, don't you?"

The veteran Spaniard, who was the Italian tire marque's main tester for the development of this year's tires, has now returned to his former role as McLaren reserve driver for 2011.

But Pirelli has vowed to continue to make improvements to the current generation of tires and wants de la Rosa to be on duty one last time.

"Our first test is in April and it would be ideal for Pedro to do it before he leaves," Pirelli's Paul Hembery is quoted in Spanish by the as.com website.

"We have made some modifications to the (2009) Toyota and as Pedro has driven it I would like him to compare (the changes)," he added.

"There are going to be a lot more tire pitstops this year and when the safety car comes out at a bad time, the middle class teams could benefit," he said.

The Austrian acknowledged that the teams and Bernie Ecclestone pushed for more tire degradation to improve the show, but he said Pirelli has "not yet found the right balance".

"From the middle of the season they will get it under control, so it should not be decisive for the entire year," he added.

Fernando Alonso agrees that the Pirelli factor has perhaps been overstated recently.

"The best and fastest car will still win the title," he is quoted by Autosprint.

"Strategy is going to be important, and a couple of times it will happen that maybe the fastest one has the wrong strategy.

"But over 19 races, the most important thing is to have a fast car," added the Ferrari driver.

That is the view of Ari Koivula, the boss of the Sauber sponsor Mad Croc.

Mad Croc is an energy drink, so it is no surprise that Koivula is critical of Vettel, the most prominent representative of market leader Red Bull.

Nonetheless, Koivula told Turun Sanomat in Finland: "I can say that Kimi Raikkonen's image today is still really cool among young people, while the much younger Sebastian Vettel's is not.

"Dynamic, contemporary young people don't have Vettel's hair style and body language, which gives the impression of a mama's boy.

"What he lacks is a certain aggressiveness," he added.

Of F1's current drivers, Koivula said the "most cool" is Fernando Alonso, but he is also very happy with Sauber's Japanese youngster Kobayashi.

Vettel, however, is undoubtedly Bernie Ecclestone's favorite driver, describing him as a "godsend for formula one" in a new interview with Sport Bild.

Globo reports that the 34-year-old Brazilian, who raced a few times in 2004 after Toyota ousted Cristiano da Matta, took delivery of the TF104 at his home in Curitiba.

"I wouldn't say it's a trophy, but it was a part of my life," said Zonta, who was Cologne based Toyota's test driver for four years.

"What happened is that when they left F1, I kept in touch and I always asked to have my car. They managed to fulfill my dream of having an F1 car in my house," he smiled.

Zonta made his F1 debut with BAR in 1999, and also worked with Jordan and Renault.

He has subsequently raced sports cars and in Brazil's Stock Car series.

An analysis by Germany's Auto Motor und Sport shows that, excluding HRT who did not run a new car at all during the winter tests, Ferrari's 150 Italia did the most mileage.

And at the bottom of the ranking, behind Force India, Lotus and Virgin, is McLaren, having done almost half of Ferrari's nearly 7000 kilometers.

"I'm not going to lie. It's not the best way to go into the season," admitted Jenson Button.

The MP4-26 was launched late after skipping the opening Valencia test, but it has since been plagued with exhaust, hydraulic and aerodynamic problems.

800 kilometers behind Ferrari on the mileage list is Red Bull, whose Christian Horner said the team has "never been so well prepared" for a new season.

Button insisted: "We are a long way down on it (mileage) but there is no point getting negative about it and down at this point of the season."

Third best was Sauber, ahead of Mercedes, Toro Rosso, Renault and Williams.

Mercedes to be 'big surprise' of 2011 – Soucek
(GMM) Mercedes could be "the big surprise" of the 2011 season, according to Andy Soucek.

Speaking to Marca in Spain, the former F2 champion and 2010 Virgin tester was asked to give his verdict about the looming world championship.

"I see it between the two Red Bulls and Alonso, but watch out for Mercedes, who seem likely to be the big surprise," he said.

The Brackley based team apparently made a huge leap forwards with the W02's upgrade package at the final Barcelona test, with Michael Schumacher clocking the fastest time of the week.

"I am confident that we can compete for podium finishes, and I am hopeful we can fight for victories at some of the races," said Schumacher on Wednesday.

Soucek rules out third driver role with small team
(GMM) Andy Soucek has ruled out returning to the role of third driver with a small formula one team.

As reigning F2 champion, the Spaniard signed up as Virgin's test and reserve driver last year, but he quit in August due to not receiving any cockpit time.

"Frankly, I would not do it again if it was not with a top team," Soucek told Marca in Spain.

"The testing is too limited and actually you don't even get in the car," he added.

Minister says gov't to be tough in next Aus GP talks
(GMM) The state Victorian government wants to keep the Australian grand prix beyond 2015 but only with new contract terms.

That is the latest development in the saga surrounding Melbourne's future on the F1 calendar, after powerbrokers Jean Todt and Bernie Ecclestone this week said Australia is important to the sport.

But there is a long-running debate in Victoria about the rising cost of the annual event to taxpayers, and it was the previous government who negotiated the current deal that is not set to expire until 2015.

"There's no doubt about it that the Victorian government would want to secure the grand prix," major events minister Louise Asher told Reuters.

"It's just that we're not going to be bunnies in contractual negotiations."

Ecclestone to fight Todt over 2013 engines
(GMM) Bernie Ecclestone has revealed he is "at loggerheads" with FIA president Jean Todt about F1's engine formula for 2013.

Todt has announced new 1.6 liter four-cylinder turbo regulations, but F1 chief executive Ecclestone on Thursday admitted he fears it will rob the sport of one of its two most important factors.

According to Australian news agency AAP, he said one crucial factor "is
Ferrari and second is the noise" of the big normally-aspirated engines.

The 80-year-old said he is so worried that he fears television broadcasters will stop buying the rights to formula one.

"We don't need it and if it's so important it's the sort of thing that should be in saloon car racing.

"The rest of it is basically PR — it's nothing in the world to do with formula one.

"These changes are going to be terribly costly to the sport. I'm sure the promoters will lose a big audience and I'm quite sure we'll lose TV," he added.

It was announced that Shell, the Dutch global oil giant and Ferrari sponsor, has inked a "multi-year" deal to be the title sponsor of the popular Spa-Francorchamps race.

The historic event in the Belgian Ardennes was said to have been endangered for financial reasons.

Shell also recently renewed its long-standing partnership with Ferrari until 2015.