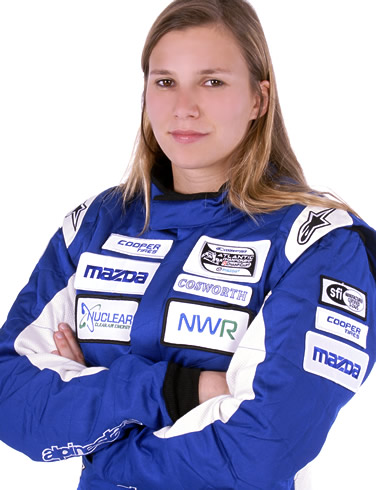 No longer a rookie, Simona de Silvestro had two successful tests in preparation for the 2011 season with HVM Racing.

De Silvestro enters her sophomore season with a positive outlook, a new title sponsor and a new car. Entergy Nuclear has partnered with HVM Racing in a multi-year agreement aimed at raising awareness about Nuclear Clean Air Energy and the career opportunities within the industry.

The second test, at Sebring International Raceway, was equally as productive. The team ran more than 85 laps and was able to gain from several developments from the off-season. Simona's lap times continued to improve throughout the day, and although outright lap time competition was not the team's objective for the test, she finished as the fifth fastest driver on track.

"The tests went extremely well," says Vince Kremer, HVM Team Manager. "We ran a lot of flawless laps at Texas and Sebring. Simona was able to give us excellent feedback on the changes we were making. The chassis is new, which gives us benefits over 2010 and she liked the feel of it."

"I'm really happy with our results," she said. "The car felt good and is performing the way we want it to with the changes and development the team has done. I'm optimistic about both our oval and road course programs this year. I am also excited to be working with Entergy on our sponsorship program.