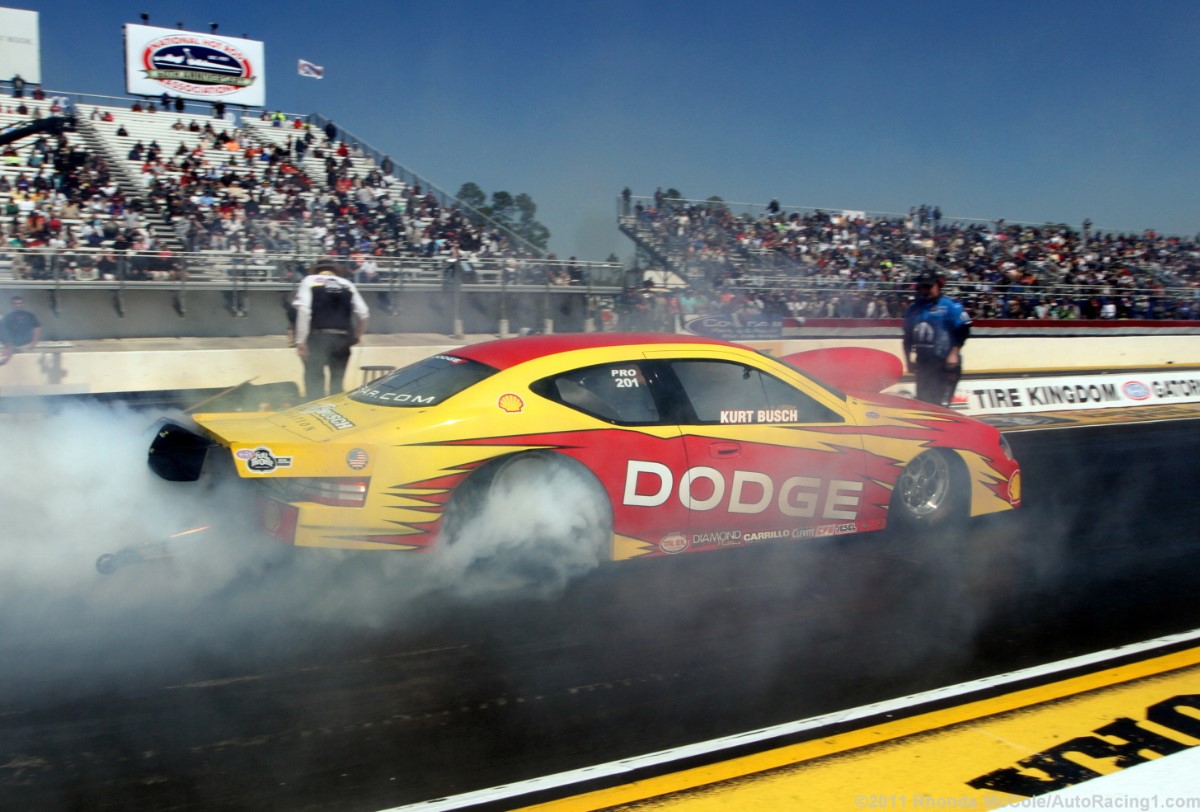 UPDATE #3 Kurt Busch's NHRA Pro Stock debut ended after one round on Sunday, as the NASCAR Sprint Cup driver lost to Erica Enders in the first round of eliminations in the 42nd annual NHRA Tire Kingdom Gatornationals at Gainesville (Fla.) Raceway.

03/12/11 Kurt Busch raced his way into his first career NHRA Pro Stock final round on Saturday, saving himself from an embarrassing DNQ in his Pro Stock debut.

Busch rebounded from his botched qualifying runs on Friday to post a 6.532 at 211.46 mph, enough to secure the 12th qualifying spot for Sunday's final eliminations, where he will face Pro Stock rookie Erica Enders in the first round.

Busch was all smiles after several "rookie mistakes" during his first two qualifying attempts on Friday resulting in him qualifying dead last among the 20 drivers trying to make the show for Sunday's finals.

"It was an interesting day to say the least," said the 2004 Sprint Cup champion.

As a NASCAR driver coming into the world of drag racing, Busch had figured he would face a steep learning curve, mentioning that he was prepared to eat some "humble pie".

He did way worse than that.

On Busch's first run, the car developed a tire shake which forced him to the shut the car down before it went 50 feet.

In his second run, he failed to move the car into the staging lane within the seven-second window, causing him to be "timed out" and his second attempt nullified.

"This is worse than humble pie," said Busch. "This has too much bitter in it because I'm the one making the mistakes. This is definitely one of those scenarios where things happen so fast, I've even messed up backing the car up. Things I thought I had under control, I thought we could be past that. I thought the humble pie would be we'd be running 6.56 and the rest of them ran a 6.49."

Busch's top speed from his first run – the only one that was actually scored – was clocked at a mere 36 mph. He later compounded his folly by cutting the turn off the track too sharply, nearing snagging his parachutes on the gate leading to the pits.

"Imagine that – a NASCAR guy turning the corner too fast," joke Busch.

Busch will get two more chances to get into the field during Saturday’s qualifying sessions, and he’s pretty confident they have pull all the mistakes behind them.

"We've gotten a lot of the little knicknacks out of the way today as far as rookie mistakes," said Busch. "Hopefully we'll get out there in the staging lanes on Saturday, take a deep breath and go after it.

"We had such an eventful day today, there's no way we can screw up tomorrow."

In Friday's first qualifying round, Busch's Pro Stock car developed a tire shake right off the start, forcing Busch to shut it down before he cleared the Christmas tree, ending with a time of 18.334 seconds at 36.43 mph.

In the second qualifying round later that afternoon, Busch took too long to roll into the staged position against Vincent Nobile and was timed out, essentially disqualifying him before he had a chance to make a run.

Busch will still have two more chances to qualifying during Saturday's qualifying session, where he will have to qualify 16th or better to make the show.