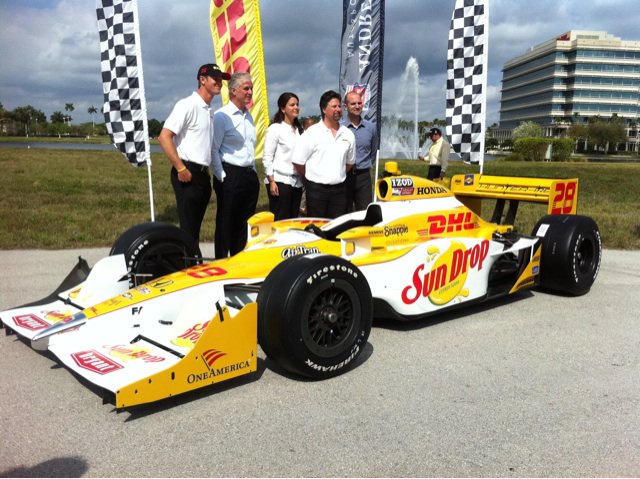 DHL, the world’s leading logistics company, and Andretti Autosport today unveiled the new DHL branded IndyCar to be driven by Ryan Hunter-Reay during the 2011 IZOD IndyCar Series at DHL Regional Headquarters in Plantation, FL. Executives from DHL along with Michael Andretti, owner of Andretti Autosport, and driver Hunter-Reay were on hand to give DHL employees and guests a first look at the car and celebrate this exciting new sponsorship.

“The new #28 DHL IndyCar is a true representation of the attributes that DHL and Andretti Autosport live and breathe every day," stated Christine Nashick, vice president of marketing, DHL Express US. “The speed, reliability and dedication exemplified by Andretti Autosport, Ryan Hunter-Reay and the DHL IndyCar team are truly an ideal fit with DHL. As the official shipping and logistics provider for Andretti Autosport, we are looking forward to building the relationship and a very successful 2011 IndyCar Series."

In addition to the DHL livery unveiled today, a new number for the IndyCar driven by Ryan Hunter-Reay, resident of Fort Lauderdale, FL, was introduced. The #28 depicted on the racer is a show of support for the estimated 28 million people living with cancer worldwide. Ryan Hunter-Reay, who lost his mother to colon cancer in 2009, continues to be a leader in the fight against cancer and serves as an ambassador for “Racing For Cancer," an organization founded in 2010 to help build awareness in the global fight against cancer.

The #28 DHL IndyCar is comprised of an Italian-built Dallara chassis, a 3.5-liter, V-8 Honda engine and Firestone Firehawk racing tires – all of which are elements mandated by the IZOD IndyCar Series rules. The car, which weighs approximately 1,600 pounds when race-ready, is capable of accelerating from 0 to 100 in 4.5 seconds, decelerating from 100 to 0 in 1.7 seconds and can reach a maximum speed of 240 miles per hour.

Hunter-Reay will be starting his second season with Andretti Autosport as he gets behind the wheel of the team’s new DHL entry. Coming off a breakthrough year that saw him win the Grand Prix of Long Beach, Hunter-Reay finished a career-best seventh in the IZOD IndyCar Series standings. DHL will also be an associate sponsor for the car driven by the team’s newest member, Mike Conway of Miami, FL. Conway, who launched his IZOD IndyCar Series career in 2009 after building a strong resume in Europe, was signed to the team’s roster on February 1.

At today’s event, Ryan Hunter-Reay and Andretti Autosport brought the excitement of IndyCar racing to the DHL campus – meeting with employees and guests, signing autographs, handing out branded merchandise and providing all an up-close view of the bright yellow and red racer.