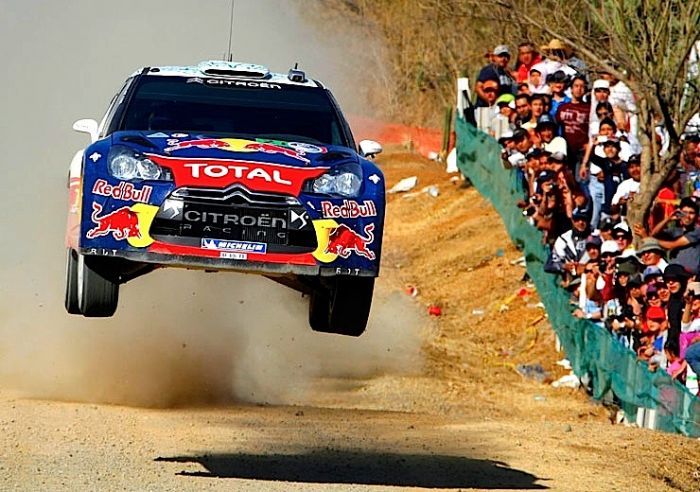 Sebastien Loeb won his fifth WRC Rally Mexico in dominant style once teammate Sebastien Ogier had crashed out on the lead Sunday morning. The works Citroens dominated the rally with Ogier ahead for most of day 1 despite consistent pressure from Loeb, who took charge on Saturday with Ogier then running first on the road.

But Loeb picked up a 50-second penalty for being 5 minutes late into SS15 after a gearshift issue to put Ogier back ahead after he escaped penalty for entering a service park early Friday lunchtime. But the younger works Citroen Sebastien, Ogier crashed out of Sunday's first stage, leaving Loeb to cruise to the 63rd win of his incredible WRC career.

"That was a very hard weekend, a terrible fight with Ogier until today," Loeb reflected. "He was really, really pushing hard. "I think we've done nearly a perfect weekend, some small troubles but not many for a new car. I'm satisfied with the performance – the DS3 is very fast."

Ford ended up with a lucky double podium with Mikko Hirvonen second from Jari-Matti Latvala ahead of Citroen super-privateer Petter Solberg who stormed back to fourth despite losing seven minutes on Friday. Stobart Ford's Mads Ostberg recovered from a puncture to finish impressively again fifth ahead of teammate Henning Solberg took a troubled sixth.

Matthew Wilson lost a possible career-best finish to electrical failure from fourth, Stobart teammate Evgeny Novikov lost oil pressure to retire while running an impressive fifth, Dennis Kuipers rolled his Ford out of seventh on leg two and Ken Block managed to retire the Monster Ford no fewer than three times and was still on course for 10th until yet another electrical glitch dropped him to 13th.

All of that allowed Federico Villagra to come back and take a point in the Munchi's Ford despite behind Dakar winner Nasser Al-Attiyah, who hung on to take S2000 class victory in seventh overall ahead of the fast-closing Martin Prokop.