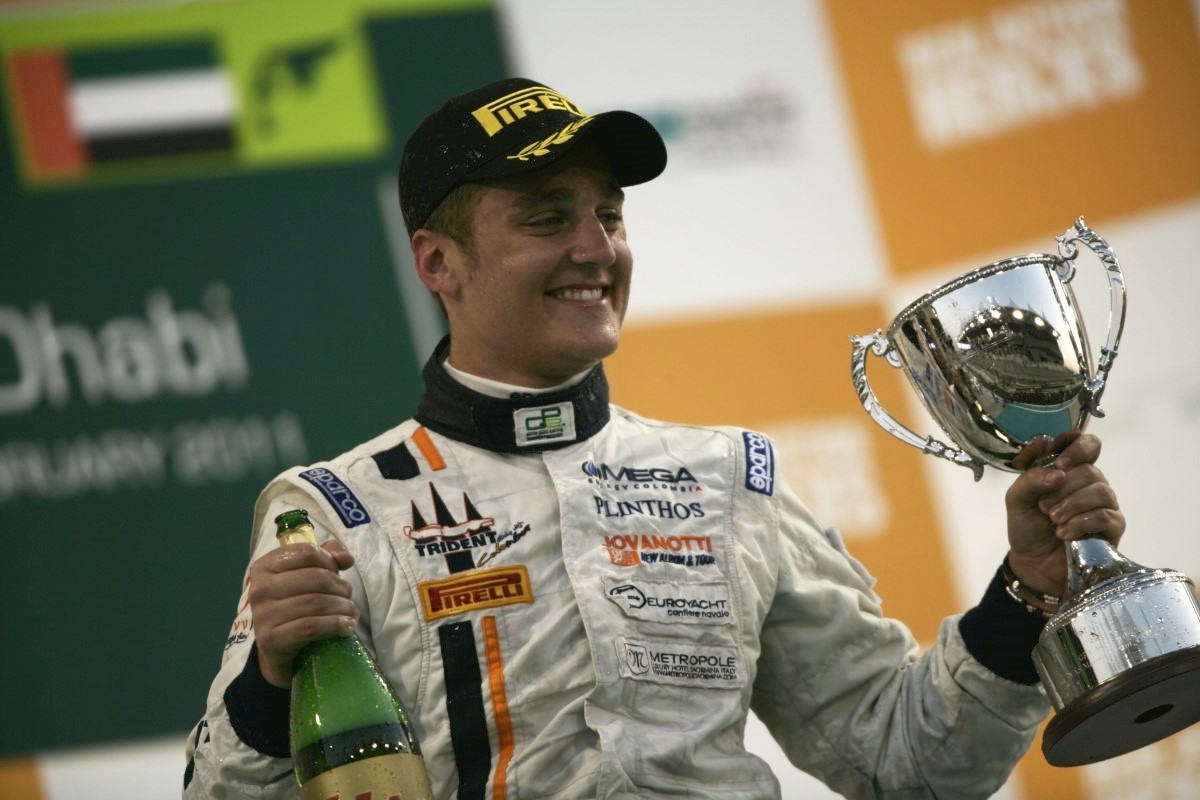 UPDATE Jules Bianchi is has been stripped of his fourth place finish in Abu Dhabi during the feature race on Saturday. The Frenchman has been given a time penalty of twenty seconds for ignoring yellow flags, thus falling to eighth place outside the points.

Bianchi has not been left completely empty-handed however, as he will now receive a point for posting the fastest lap time within the top ten runners. Compatriot Charles Pic and Racing Engineering driver Nathanael Berthon were the other drivers to given twenty second penalties, with the pair also failing to adhere to yellow flag rules.

The penalty for Bianchi means that he is no longer four points ahead at the top of the title-race, with his advantage over Romain Grosjean being halved after the stewards’ decision.

02/12/11 GP3 Series graduate Stefano Coletti led today’s Sprint Race at Yas Marina Circuit from pole position to checkered flag. The Trident Racing driver managed to build up and maintain a gap with his closest rival all through the race and crossed the finish line a winner for the first time in GP2 Asia Series.

All twenty-six cars were on the grid for the start of the sprint race of GP2 Asia Series Round 1 in Abu Dhabi today. When the lights went off, the Monegasque driver managed a better start than his rivals and kept the lead for the entire duration of the race. Behind him, Addax’s Giedo van der Garde made a great start from P4 to P2, but he was soon handed a drive through penalty – seconds before the green light, one of his team’s mechanics crossed the grid to collect a forgotten fan left by the side of the Dutchman’s car. Behind the two leaders, Sam Bird at iSport and Josef Kral at Arden were hot their trail while Bird’s teammate Marcus Ericsson recovered from a bad start to fifth position.

With van der Garde dropped to P20 following his drive through, it was up to Bird to challenge Coletti, but the Trident racer kept his cool and built bit by bit a gap big enough to breath and stay in control of the race. Further down the pack, yesterday’s race winner Jules Bianchi had passed Romain Grosjean at the start, and the Dams driver would not have it. But the battle of the French would only last one lap as Scuderia Coloni’s Michael Herck touched the back of Grosjean’s car and sent him into a spin and an early stop to his race.

The rest of the event was pretty animated in the middle of the pack notably with bold maneuvers from Nathanael Berthon and Charles Pic on Johnny Cecotto and Jolyon Palmer respectively. The fight for points was also quite lively: Rapax’s Fabio Leimer who had started tenth on the grid could not hold off Bianchi for P7 and then gave way later on to Herck.

On Lap 21 drama hit the iSport team when Bird lost control of his car on a curb at Turn 10, crashed, and ironically promoted his teammate onto the podium. Three laps later, Bianchi was all over Davide Valsecchi for P4 and passed the Italian albeit going a bit wide.

Finally, Coletti was given the checkered flag and earned his first win in GP2 ahead of Kral and Ericsson, the Czech scoring his first podium-finish in the Series. Next step: Bahrain, next week for Round 2 of the 2011 GP2 Asia Series season.