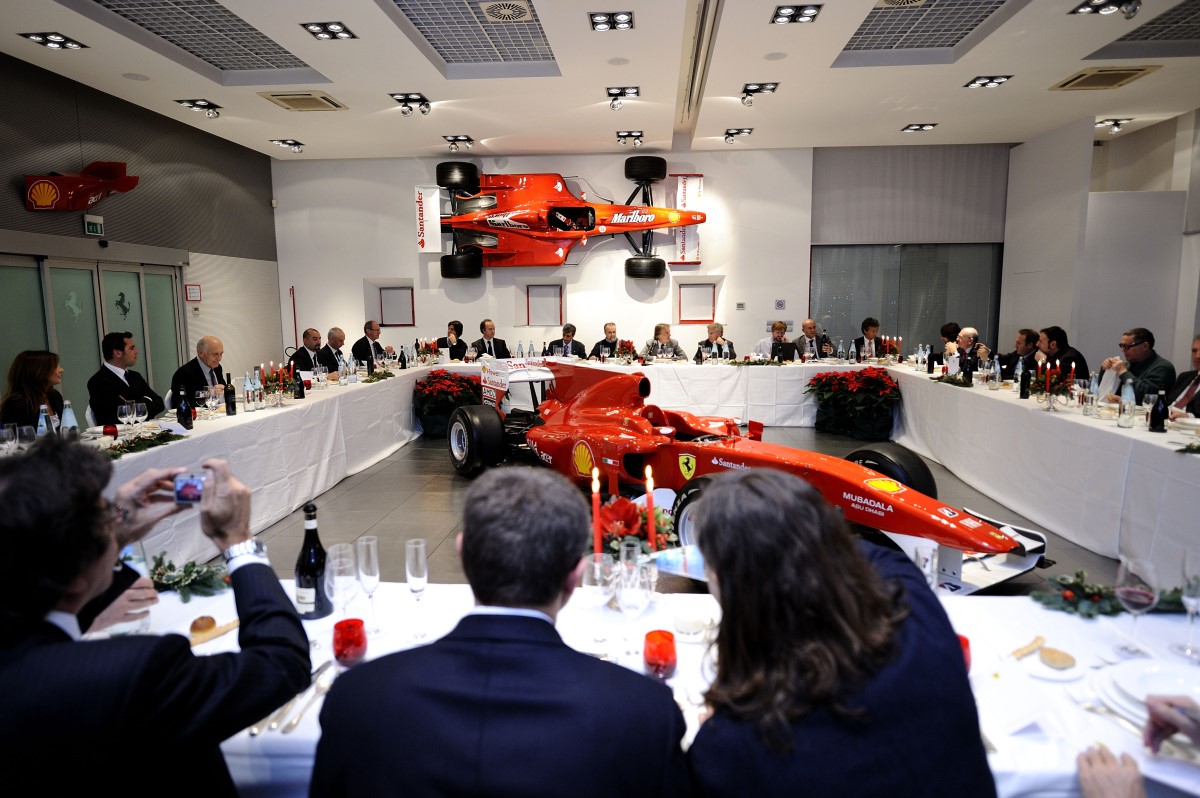 Toasts, presents and best wishes last night at the Fiorano Track, as Luca di Montezemolo welcomed guests from the Italian Formula 1 media and old friends to the traditional Christmas dinner, which was followed on Thursday 16 December, by a similar evening with foreign sports journalists.

This year’s meeting was preceded by a host of events, starting with a press meeting with Luca Baldisserri, who summed up the first year of the Ferrari Driver Academy (see separate story) followed by the journalists tackling a pit stop competition using the F10 that Fernando Alonso had raced in the last few Grands Prix of the season. 5.4 seconds was the quickest time for the part-time mechanics. After this they were treated to a surprise visit to the Formula 1 simulator which has also reached its first birthday.

Also present alongside the Ferrari President were Vice-President Piero Ferrari and the Scuderia Ferrari Marlboro Team Principal, Stefano Domenicali and the evening served as the perfect opportunity to sum up the year’s racing activity. “Clearly there was a lot of disappointment, which is inevitable when you lose the title at the last race," said Montezemolo, as the journalists tucked into the usual tortellini in chicken broth. “But nevertheless, I am pleased with what we achieved. In his first year with us, Fernando did extremely well, bringing him with him a breath of optimism and conviction. In July, nobody believed him when he said he would be in the fight for the title right to the end, but he was proved right. I really like drivers who spend a lot of time in Maranello, forming a solid bond with the team. For various reasons, Felipe did not have a good season, but I am convinced that next year he will do very well and we will give him all he needs to succeed. How would I score it? I give 8 to the team, 9 and a half to Fernando and 7- to Felipe.

“I wish to congratulate Sebastian Vettel and Mark Webber and we must acknowledge the fact that Red Bull had the best car," continued the President. “Our aim for next year is very simple: we will be racing to win. There will not be any major changes within the team, just a few minor adjustments. This group of people is already capable of winning and there is definitely no need for an upheaval. I feel very sorry for Domenicali, because if we had won, it would have been a victory for a team that has a strong Italian identity and that has evolved as a result of the dynamic stability which sums up our philosophy. To achieve our objective, we must have the best car right from the start of the season."

Montezemolo then moved on to the topic of the state of Formula 1 and its future: “We hope next year will be as good a season as this one and not one like 2009, when the championship seemed to be drugged. The small teams? Honestly, I feel it would be better to have the opportunity of running a third car rather than seeing cars that would struggle even in GP2: it’s an idea we will put forward again strongly for the future. On the subject of the new circuits, I have to say it would be better if more thought was given to the races with an increase in overtaking opportunities with less effort going into beautiful architecture. Then we must unblock this absurd limitation on testing. Formula 1 is the only sport in which there is no chance to train. It is like asking Real Madrid, Milan or Inter to play with smooth soled boots in the rain or not to warm up before a Champions League game. Fortunately, the rule banning team orders has been abolished, which was well and truly a hypocritical rule. It has always been part of the sport and those who race for Ferrari are perfectly aware of the fact. The FIA, under the guidance of Jean Todt, is working well and this decision confirms that trend."

The evening ended with the journalists receiving the now traditional gifts: a model of the F10, two books, Ferrari Magazine Number 11 and Racing Activities. But there was also an additional surprise “freebie," the latest version of Futurisiko, the world famous strategy game. Given that there has been a lot of talk about strategy these last few weeks, here was a great opportunity for the media to exercise their minds, after having exercised their bodies earlier during the pit stops!