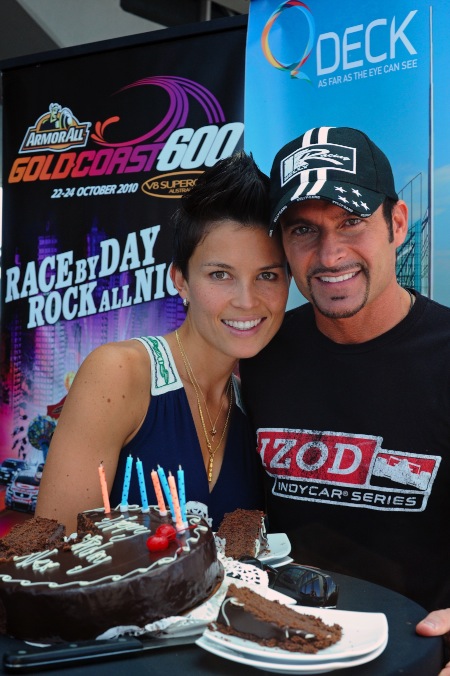 "There are a lot cool things about the IZOD IndyCar Series -the cars, the speed, the technology, the racing, the adrenaline rush -but recently, I was really reminded of one of the things that really makes IndyCar special for me: personal connections.

"I got to really appreciate the more personal side of the IndyCar series, starting with a visit with some really young fans at Riley Hospital for Children in Indianapolis. I went with fellow IndyCar drivers Justin Wilson and Ed Carpenter as part of the "Racing for Kids" charity program in an effort to lift their spirits and help them forget the medical challenges they face.

While I know they are all a little young to know who we are, the kids are pretty impressed to know we are racecar drivers and just happy we spend time in a playroom playing video games or coloring, or visiting them in their rooms. We signed autographs, handed out hats and Mattel Hot Wheels die cast cars and took photos.

"I got to tell them about how I drove a life-sized Hot Wheels IndyCar and I made sure to sneak them some extra toy ones because you can't really race with just one car, right? The idea was really just to give them an experience that allows them to feel like typical kids having a great time.

"A few days after I got more quality playtime, this time with some die-hard IndyCar fans at a Fanimation sponsored karting event during a "Winter Indy Tweetup", a weekend of events bringing people together from both the U.S. and Canada who first met through Twitter.

"It's not often that I get to spend a couple of hours getting to know fans in such a fun setting without having to rush off somewhere. We spent time on and off the track, laughed, took photos and talked about IndyCar. It was nice to be able to show them how much their support means to both me and the IZOD IndyCar series.

"I also got to express my appreciation to my extended family at the FAZZT Race Team Christmas party. We're a small group but we accomplished a lot in our first year together because we all believed in what we were doing and in each other. I made sure to personally thank each member of the FAZZT family for their contributions, not just to the team, but to making everyday fun and special for all of us. It was also a chance for me to thank the spouses for their sacrifices. A lot of weekends, birthdays, anniversaries and holidays are missed because of their loved ones' commitment to the team and IndyCar series; and none of us could do it without their support.

This holiday season, I'd like to thank all of you for your support as well. I hope you all get to spend a lot of extra time with your own fans -your family and friends. Alex Tagliani