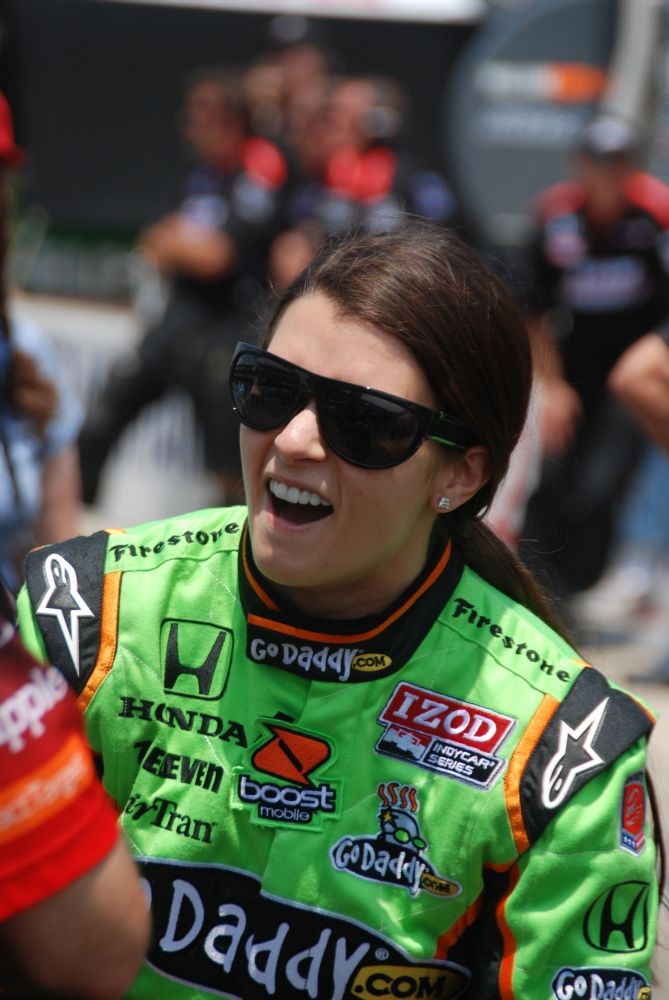 It was media day for the Indianapolis 500, and the room had more woman drivers than a PTA car pool.

Over in one corner was the rookie from Brazil, Ana Beatriz Caselato Gomes de Figueiredo. It takes about half a lap to get out her given name.

Down the way was Simona de Silvestro, a 21-year-old from Switzerland. Not far from her, Sarah Fisher; the veteran who not only drives her car but owns it, too.

And finally, here came Ms. Grouchy, star of the show — at least for now.

"I can't say I've had a lot of fun this year,' Danica Patrick was saying. "It's only fun when you're doing well."

In a moment, she can tell us what it was like getting booed, as if she were a quarterback in Philadelphia who had just thrown one too many interceptions.

But first, the big picture about this Indianapolis 500.

The guy who'll start first is chasing history. Helio Castroneves has won this thing three times. A fourth would admit him to the racing pantheon of A.J. Foyt, Rick Mears and Al Unser Sr.

The guy who'll start last is pursuing justice. Tony Kanaan is the only man to ever lead in seven straight Indianapolis 500s, but won none of them. Hard luck or a hard wall keeps getting in the way.

He crashed twice last weekend, then barely qualified, and had to change the chassis, meaning he was pushed back to 33rd.

"I think the racing gods have an amazing sense of humor," former winner and ESPN analyst Eddie Cheever said.

The running joke this week is how many cars Kanaan will pass in the first lap. As is his charming custom, he looks at any travails with bemusement.

"I have no pressure because I'm dead last anyway,' he said. "If I have a bad start, nobody can say anything."

Compelling stories, if either Castroneves joined the legends or Kanaan finally got a break.

But also notable is the record of four women in the same race. That starts, of course, with Patrick, whose issue is trying to maintain her glamorous relevance.

She has been a supernova, partly from coming close here. But she has had a tough early season, while spreading herself thinner, dabbling in NASCAR. Last week, agitated after a shaky qualifying run that put her on the eighth row, she was not quite ready for the quickie interview. She came off as heaping blame upon her car and crew.

Bad form, the audience decided, and down from the grandstands poured Patrick hostility, something as rare in Indianapolis in May as snow flurries.

All this would seem to put Patrick at something of a crossroads. A PR blunder, some poor finishes, a complicated strategy of competing in two series. And now, a wave of women sharing the starting grid.

Can her aura stay so dominant, without something very good happening soon on the track? Any danger Danicamania could go the way of the hula hoop? Pertinent questions. And what would be a better time to answer than Sunday?

"Winning," she said, "will solve everything for me."

She has come to terms with last weekend's dust-up, accepting responsibility while noting that any driver might be a little touchy in a similar situation.

Anyone remember Foyt's famous crustiness? Nobody booed him. But then, as Patrick herself pointed out, he won four times.

"I'd be lying if I didn't tell you I want fans to like me. Everybody wants that, she said. "I unfortunately said the wrong thing.. .. That's my cross to bear.

"I'd just done 225 miles an hour on the very ragged edge, and got a microphone in front of me. My hands were still shaking. It all happens so quickly, and it got the best of me.

"All of a sudden, an eruption of boos. I just kept looking down and thinking, 'oh shoot.'

"I think when it's such a majority that feels a certain way, obviously I didn't say the right thing."

She sought out a wise teammate for advice — Kanaan, who has become a folk hero for his grace through adversity. He counseled her to start having fun again, and also reminded her that her support crew has helped make her racing's glamour queen. You don't dump mud on them in public.

"It was like talking to a friend," he said. "I think I said what I needed to say. Some people get it and some people don't. When they don't, they get booed, and then they understand."

Patrick said she gets it. She will try to dial down her frustration, though feistiness is part of her charm. But she needs a big Indy 500, badly. The marquee is hers Sunday, as always. If she can do something to get there. USAToday.com