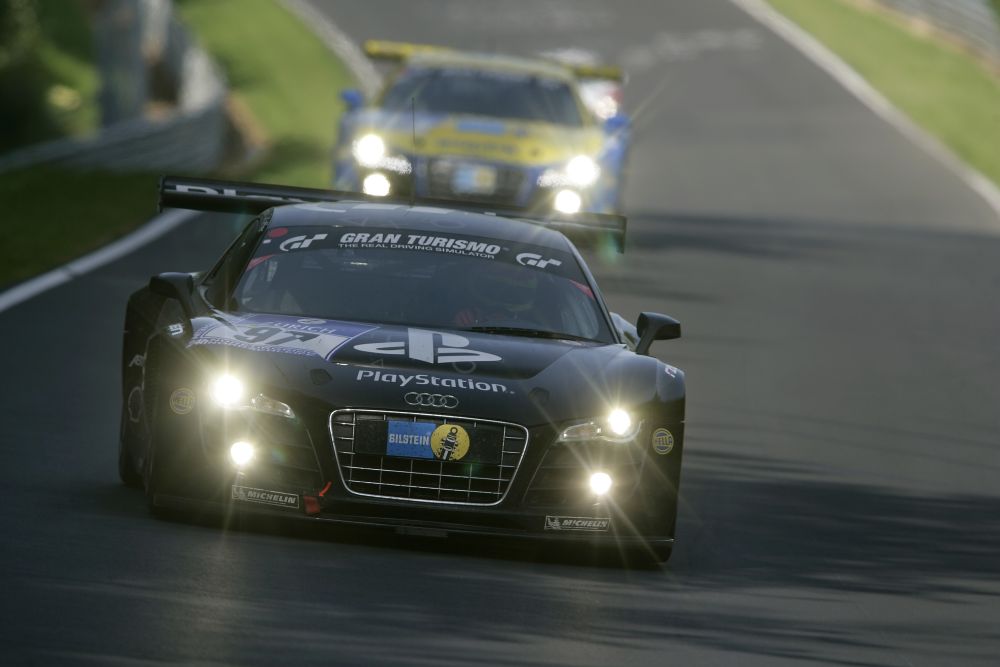 More than 200 vehicles will contest the NÃ¼rburging 24 Hours this weekend – including seven Audi R8 LMS cars entered by the Audi customer teams ABT Sportsline, Black Falcon and Phoenix Racing.

More than 200,000 spectators are expected to turn out for the 38th edition of the endurance classic around the notorious NÃ¼rburgring-Nordschleife. Audi has been providing the official vehicles for the popular event in the "Eifel" since 2002 via its sporting subsidiary quattro GmbH. And since this season Audi Sport also offers a vehicle to private teams which makes it possible for them to fight for overall victory in the 24-hour race: the Audi R8 LMS.

Last year when the new GT3 sports car made its debut in the 24-hour race with support from Audi Sport, Team ABT Sportsline with Christian Abt, Jean-FranÃ§ois Hemroulle, Pierre Kaffer and Lucas Luhr immediately clinched victory in the strong field of the SP9 class and finished as the overall runner-up.

"For the Audi R8 LMS this race was a final test in extreme conditions on the world’s longest race track," explains Head of Audi Motorsport Dr. Wolfgang Ullrich. "We were able to show that our new GT3 sports car is absolutely competitive for customer sport. The experience gained on the Nordschleife last year was fed into the final version of the R8 LMS which has been delivered to our customers since this spring." 14 teams have received their customer vehicles since the deliveries started.

All customers receive technical support by Audi Sport from the recently opened customer sport center in Ingolstadt – including the ABT Sportsline, Black Falcon and Phoenix Racing teams at the NÃ¼rburgring 24 Hours. "We’re happy to see as many as seven Audi R8 LMS cars contest this race. With their visual design, the sound of the V10 engine and the many popular drivers, these cars will probably be among the favorites of the audience," says Dr. Ullrich. "As in all other Europe-wide GT3 races, the Audi customer sport center ensures the required technical support. Entering the cars as well as selecting the drivers is up to the teams which compete against each other as well. We’re very excited to see how our customers will do in this race."

Like in 2009, Team ABT Sportsline, which secured the first victory of the season for the Audi R8 LMS in the ADAC GT Masters at the Sachsenring last weekend and has clinched several podium results with Audi vehicles in the NÃ¼rburgring 24 Hours, is fielding two R8 LMS cars driven by the Audi "factory" drivers Mattias EkstrÃ¶m, Oliver Jarvis, Lucas Luhr and Timo Scheider, among others.

Team Phoenix Racing, which is entering a total of three R8 LMS cars, has reinforced its line-up by two "factory" drivers as well. Mike Rockenfeller and Markus Winkelhock will compete for the squad based in the Eifel. In addition, two of the most successful former Audi "factory" drivers – Frank Biela and Hans-Joachim Stuck – are contesting the event for Phoenix Racing. Marcel FÃ¤ssler, who will run in the Le Mans 24 Hours for Audi in 2010, is also part of the line-up of the team from Meuspath that has won the endurance classic in the Eifel for as many as two times.

In the Audi customer team Black Falcon, which left a strong impression right away in its first two VLN Endurance Championship races with the R8 LMS, Johannes Stuck and Kenneth Heyer are particularly prominent names. Together with Luca Ludwig, who drives for Phoenix Racing, they make up the trio of sons of three highly popular former German touring and sports car stars – Hans Heyer, Klaus Ludwig and Hans-Joachim Stuck – to take the wheel of the Audi R8 LMS on the Nordschleife.

The Audi R8 LMS is the sporting offshoot of the fascinating mid-engine R8 sports car of which there are now two additional versions available for the road: the open-top R8 Spyder and the R8 GT, which is limited to 333 production units. The R8 GT will be showcased at the "Audi Fantreff" on the Ring Boulevard and lead the formation lap of the more than 200 entrants prior to the start of the 24-hour race. The German Sales organization will use the event to hand over 33 R8 Spyder and Coupe cars to customers as part of its "Drive Away" program.