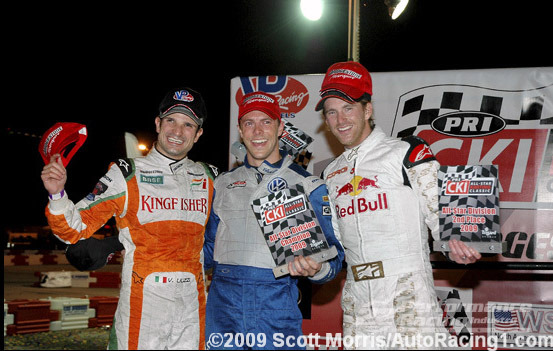 UPDATE We updated this story with the overall results from both races.

Heylen represented Volkswagen Motorsports and the Jetta TDI Cup, and raced for CRG Karts and SSC East. The chief driving instructor for the Jetta TDI Cup, he is also lead testing and development driver for the series, which uses karting as a qualifier for the young drivers selected to race in the program.

He said, “For me, the PRI / CKI karting event is a lot of fun, but everyone comes here to win the race. Look around and you see some impressive names and the big kart manufacturers like CRG, Birel and Tony Kart, and as a result, the competitive level is so, so high. Karting was my first passion in motorsport, and I’ve driven against lots of these guys over the years. Tonio [Liuzzi] and I used to race for the same tire manufacturer, and we raced together for years. It was really good to hang out and spend time with him, but even better to beat him on the track!"

He continued, “I’ve competed against Justin [Wilson] and the IndyCar guys as well, so it was like old home week in some respects. The race itself was great – the CRG and SSC East guys gave me a fast kart right out of the box. We did minimal laps in practice, and only five laps in qualifying, but it was enough for me to get pole. In the pre-final and the final, I was able to lead every lap, despite having Tonio and Scott Speed on my bumper the entire time. It was really, really tight and with the lapped traffic, at times it was really exciting."

“I want to thank CRG, SSC East, Oakley and Volkswagen. It’s due to them that I was here racing in the first place, and the support they gave me was fantastic."

The karters division was also a hotly contested race among some of the nations top karting stars, and a hot battle for bragging rights among the major kart manufacturers, who clearly came here to win. The karters division featured previous race winners Matt Jaskol, Bobby Wilson who now is running his own kart team, and Connor Daly. American-in-Europe phenom and F1 hopeful Josef Newgarden, and Indy Lights race winner Mario Romancini.

Gary Carlton took the top step of the podium with Chris Wehrheim and Top Kart's Kyle Wiegand giving him plenty of heat and pressure all night long.

Fast laps of the evening were posted by Heylen of the All-Stars division with a 15.148 sec lap, and in the karter's division, Wes Phillips with a 15.182 sec time on the very short and physically demanding course.

The PRI/CKI Karting All-Star Classic will be televised nationally on Fox Sports Net affiliation of cable networks. Both the Karter and All-Star Divisions of the race will have their own dedicated half-hour broadcasts that will air in a minimum of 86 million households. Last year’s PRI event, with re-air dates, was viewed in more than 700,000 households helping bring karting to the mainstream media. The Karter division from the 2009 event will air on Monday, January 11, 2010, at 4:30 p.m. local time while the All-Star division will be broadcast on Monday, January 18, 2010, at 4:30 p.m. (press release)