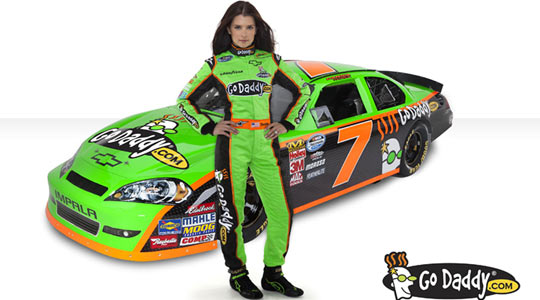 IndyCar driver Danica Patrick confirmed today that she will make a foray into NASCAR racing next season, driving for JR Motorsports in select Nationwide Series races in 2010.

Patrick plans to debut with the team in the Automobile Racing Club of America Series at Daytona, and NASCAR says she has approval to drive in all Nationwide and Camping World Truck series races.

Patrick, who competes full time in the Izod IndyCar Series for Andretti Autosport, will be sponsored by GoDaddy.com. The team and driver made the announcement Tuesday in her hometown of Phoenix. She will drive the No. 7 Chevrolet in the Nationwide Series with Tony Eury Jr. as the crew chief. The team has not decided on a set number of 2010 races.

Patrick said at a news conference that she has considered racing in NASCAR before but felt that the timing and everything was right at this point.

"I think when the idea came about a few years ago … to run some NASCAR stuff, it really was a thought, but I wasn't as prepared mentally as I am now," she said. "I've, over the years, had an increasingly busy schedule, and I feel like there probably will be almost be more consistency to this schedule than what I've had in the last year or two. So I'm finally ready. I think that the schedule doesn't intimidate me as much it used to. It's going to be a lot to learn. That's the real key part here is there is a lot to learn.

"But it's about having good people around you as well. I feel like I've really put together a good team of people to manage all the other things that go on around me, both at track and away, and we're ready to go."

The 27-year-old driver plans to participate in an ARCA test Dec. 18-20 at Daytona International Speedway.

"I’m very excited to have you join our team – and the most popular driver in the IndyCar Series and coming over to NASCAR – JR Motorsports is extremely proud to give her this honor," JRM Vice President and general manager Kelley Earnhardt said.