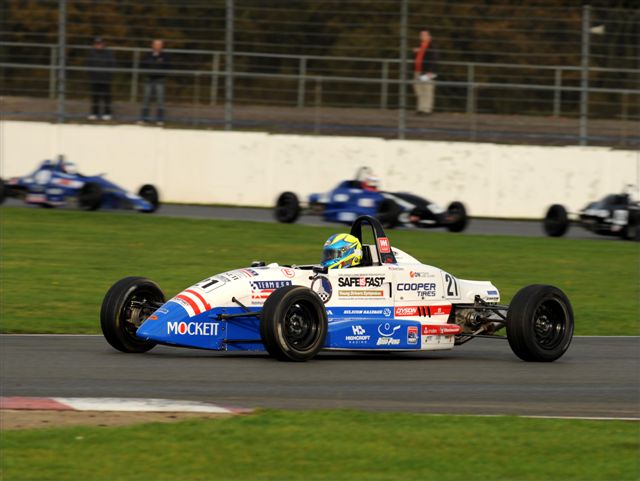 Brett Smrz took a clear victory in his Heat race for the Walter Hayes Trophy this afternoon on the Silverstone National circuit. Team USA Scholarship teammate Connor De Phillippi had to make do with a close second-place finish following his fraught eight-lap encounter.

The two Americans qualified comfortably for tomorrow’s Semi Final round which will comprise a pair of 12-lap races to determine the starting positions for the all-important 15-lap Final on Sunday afternoon.

Smrz was unchallenged in the fourth of today’s six Heat races. He qualified impressively on the pole in wet conditions and made a fine start in the #21 Team USA Scholarship/Cliff Dempsey Racing Ray GRS08. Smrz was helped when Cliff Dempsey Racing teammate Cormac O’Neill spun at Brooklands on the first lap, collecting Dempsey’s nephew, Morgan Dempsey, and eventually took the checkered flag 4.298 seconds clear of Jordan Skinner’s similar Ray GRS08.

“I was wondering what happened when I came onto the front straight because I had quite a big lead," related 18-year-old Smrz, from Coeur d’Alene, Idaho. “Next time through the Complex, I saw Morgan Dempsey’s car in the gravel trap so I figured they must all have taken each other out. After that I took it easy and made sure I didn’t make a mistake.

De Phillippi had an altogether tougher road to the Semi Final. He, too, reveled in the morning’s wet conditions to qualify on pole, narrowly ahead of Formula Ford Festival winner Rory Butcher. His Scottish rival appeared to jump the start and was level with De Phillippi as they crossed the timing line, despite a staggered grid, but somehow escaped a penalty. The pair then embarked on the most thrilling race of the afternoon, swapping positions on a regular basis before Butcher took the flag a scant 0.283 seconds ahead.

"Extremely fun," was how De Phillippi described his race. “It was really similar to the Skip Barber races in terms of the drafting. It was a good performance overall."

Nevertheless, the 16-year-old from San Clemente, Calif., admitted to some frustration at the straight-line speed differential between the top two cars.

He just drove right around me [on the straightaways]," he said. “It was ridiculous."

The discrepancy was readily apparent from trackside, especially under acceleration out of the Complex and onto the front straightaway, although to his credit, De Phillippi wasn’t looking for excuses.

"We gotta keep working on [the car] to make it quicker," he said. “Sitting around complaining isn’t going to fix it. We’ll have a look over the data, go to the Semi Final race and see how it goes."

2008 Team USA Scholarship winner Josef Newgarden hit trouble during his Heat race, finishing 15th after a spin while challenging Tom Bradshaw for the lead. The incident was caused by a balky gearshift and braking difficulties on Newgarden’s National College for Motorsport Van Diemen RF92. He will have one more opportunity to qualify for one of the Semi Finals via the “Last Chance" race tomorrow morning.

Fellow American Doug Prendeville, from Whippany. N.J., enjoyed his first race in a year, finishing fifth in the same race. Prendeville displayed his intentions by posting the third fastest lap, within a few tenths of Newgarden’s best.