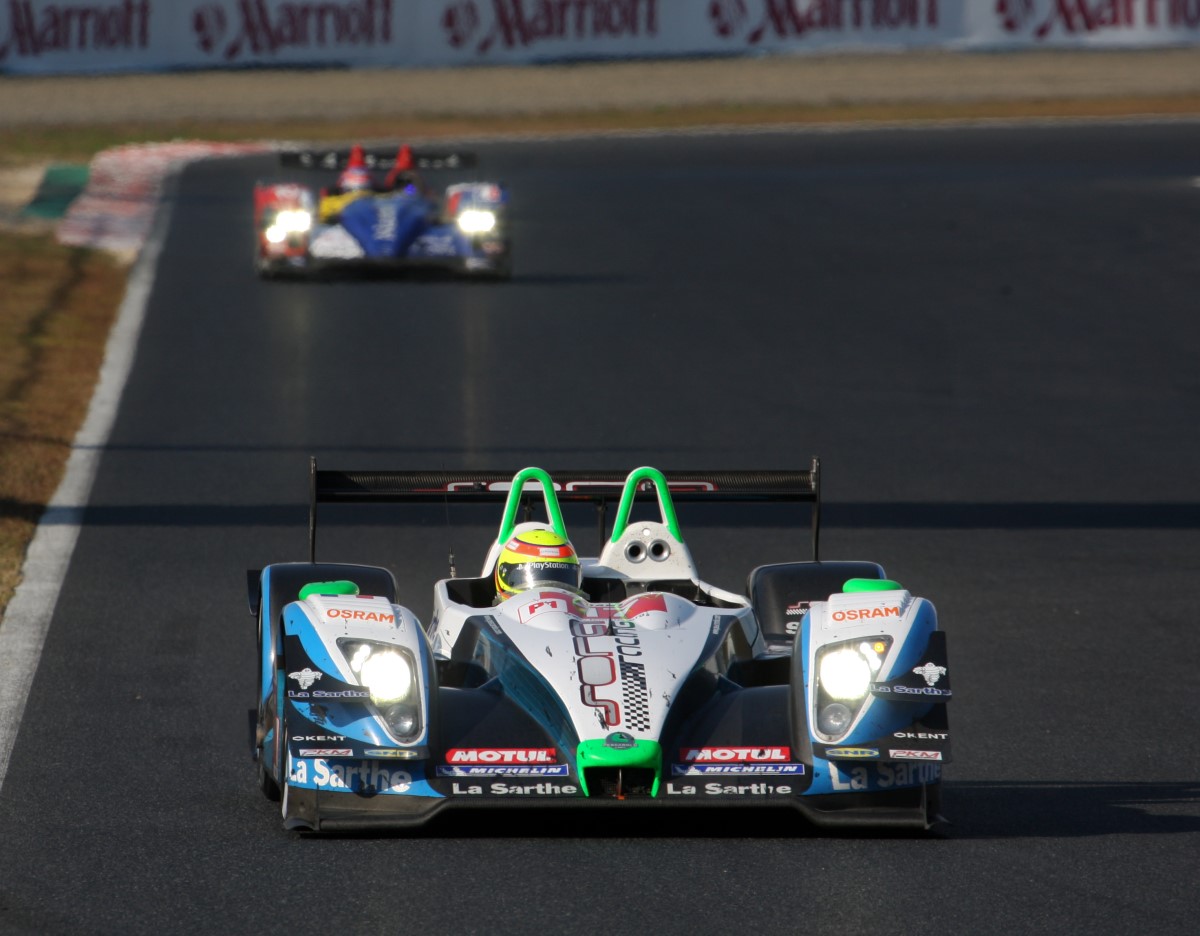 There were four different leaders in the top category, fantastic battles at every level, sudden twists and suspense! At the end of this grande premiere, the Pescarolo prototypes scored a double, first of all in LM P1 with Christophe Tinseau and Shinji Nakano and also in LM P2 for the Oak Racing team.

Just a few details finally decided the outcome of the race. The Lola-Judd that led initially ran into headlight problems. Slightly overlong pit stops for the Oreca that took up the running spoiled its victory chances. The Lola-Aston Martin had a problem with its front bonnet, and lost first place only 10 minutes from the end. Finally, the win went to the fourth leader, the Pescarolo-Judd entered by Sora Competition. None of the company’s top brass was there to see it! Drivers Christophe Tinseau and Shinji Nakano, plus a technical squad made up of French and Japanese personnel bagged the win much to the delight of team principal, Claude Gallopin.

The first-ever Asian Le Mans Series race got under way at 12h30 in blazing sunshine in front of a large crowd. Pole setter Johnny Cocker in his Lola-Judd coupe did not make any mistakes, shot into the lead and began to open up a gap helped by his soft tires. After 5 laps, he was already 4 seconds in front of Nicolas Lapierre in the Oreca-AIM who was followed by MÃ¼cke’s Lola-Aston Martin, Tinseau’s Pescarolo-Judd and the 2 Audi R10s in the hands of Albers and Jarvis. By lap 8, the leaders had already caught the back markers and the gaps closed. The first three were covered by under a second!

First upset on lap 21 when the Lola-Judd coupe that had led for the first 20 laps ran into a mechanical problem and pitted, as Race Control demanded that the defective lights be changed. This stop ruined the chances of the green car, which rejoined well behind the new leaders. Now in front was Lapierre with MÃ¼cke breathing down his neck closely followed by Christophe Tinseau. The race was developing into a real thriller with 3 seconds covering the leading trio followed by Albers and Jarvis in their Audis just in front of the LM P2 leader, Lahaye’s Pescarolo-Mazda.
In LM GT1, Tsuchiya in his Aston Martin DBR9, who had started from the back of the grid, was now in first place ahead of the Saleen in the hands of Bervillé and Yogo’s Lamborghini. In LM GT2, Marc Lieb’s Porsche and Dirk Muller in the BMW M3 were at it hammer and tongs for the lead and rubbed flanks on lap 32!

As the opening salvo of refuelling stops began (lap 40), Harold Primat rejoined in the lead after taking over the Lola-Aston from MÃ¼cke. He was just in front of the first leader, Lapierre, who remained at the wheel of the Oreca-AIM and Shinji Nakano in the Pescarolo who fell back a little. Lapierre closed the gap to Primat, but at half distance the Lola-Aston in Gulf colors was still in front – just ! The Oreca-AIM seemed to be playing a waiting game. Behind the battle for the overall lead, another one was going on that was just as intense. Dirk Muller had taken first place in the LM GT2 category, which Tom Milner, who relayed him, promptly lost to Henzler who was now in the blue Felbermayr Porsche. The leading Lola-Aston Martin opened the second round of refuelling stops with 63 minutes to go to the finish. Stefan MÃ¼cke rejoined a lap down on the Oreca and the Pescarolo. When they stopped in turn, the British car retook the lead. The Pescarolo went back out in second spot ahead of the Oreca, which had lost first then second places during its two stops.

Second major upset on lap 116 (11 minutes to go to the finish). The Lola-Aston Martin, which had opened up a slight gap, came in for a splash & dash. It suddenly pitted again to have the right-hand front louvers replaced losing third place in the process. The Pescarolo then went into the lead under 3 seconds in front of the Oreca., and at the flag the 2 French cars were separated by just over 6 seconds. There were a number of twists in the other categories as well. In LM GT1, Carlo van Dame stuck the Larbre Competition Saleen in a gravel trap handing victory to the JLOC Lamborghini driven by Yogo-Iiri. In LM GT2, the Rahal-Letterman Racing BMW emerged victorious in its no-holds-barred battle with the Felbermayr-Proton Porsche. In LM P2, the Oak Racing Pescarolo-Mazda scored an unchallenged victory leading from start to finish.